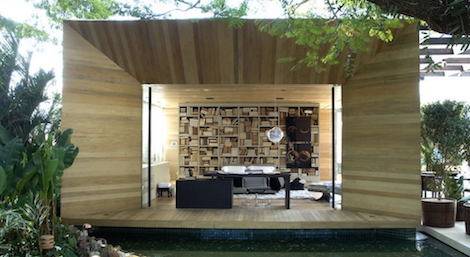 Today’s Critical Linking is sponsored by It’s All Absolutely Fine by Ruby Elliot.

Our apologies to the snow-phobic. Winter isn’t over just yet — at least according to that poor, dear groundhog. But that doesn’t mean we can’t dream of warmer days and the stack of books we want to read en plein air. Fear not: we have prepared a selection of gorgeous libraries with gardens to inspire you — which totally beats clinging to your SAD sun lamp.

The three tome-raiders evaded the security system by boring holes through reinforced glass skylights and abseiling 40ft on ropes into the repository. The haul of more than 160 books included a 1566 copy of De Revolutionibus Orbium Coelestium by Copernicus, worth an estimated £215,000, as well as works by Galileo, Isaac Newton, Leonardo da Vinci and a 1569 edition of Dante’s Divine Comedy.

Stealing is bad m’kay, but that is IMPRESSIVE.

Graham Sack had long thought that George Saunders’ work would be perfect for adaptation into virtual reality.

Saunders is most well-known for his short stories, which have won numerous awards. But Sack and Saunders ultimately decided to produce a VR piece based on Saunders’ first novel, Lincoln in the Bardo, which has drawn rave reviews ahead of its official Tuesday release.