My husband loves sitcoms in a way that both appalls and fascinates me. This is a man with exacting standards for the tone, casting, and logical coherence of the next Mission: Impossible movie. And yet he binge-watches Three’s Company, which I find so dated and unfunny I can hardly be in the same room with it.

Now, before everyone gangs up on me in the comments section, I am aware (thanks in no small part to my husband) that there are plenty of smart, subversive sitcoms (The Golden Girls; Parks and Recreation). But when I sit down to watch TV, I want to dig my teeth into some complex world-building and high emotional stakes, delivered with whipcrack dialogue and well-wrought metaphors.

…Or maybe I’m just a hypocrite. Because, dear reader, I have my own genre sweet tooth, and it craves shonen manga. Comics from Japan, aimed at ten-to-fifteen-year-old boys, packed to the gills with explosions and speed lines and monologues about the Power of Friendship.

After a recent trip to the library, when my husband innocently asked what I was reading and I had to confess that I was yet again checking out a stack of comics marketed to a demographic that is Definitely Not Me, I found myself attempting to explain. “I know that there’s nothing artistically groundbreaking here. It’s the same archetypes, the same basic story over and over again, but I just… I just love it. The familiarity is comforting. I’ve been reading them for so long, and it’s just…”

I can’t be too hard on my husband. In these uncertain times, it’s nice to settle in with a story that’s always composed of the same elements:

Almost always a teenage boy who feels alienated from his classmates/community/civilization. Either he’s constantly hiding his special powers in a world where they’d get him in trouble, or he lacks special powers in a world where everyone’s super. Either way, no adults expect him to amount to much. But he WANTS TO BE THE VERY BEST, LIKE NO ONE EVER WAS, and he’s not going to let a little thing like social isolation/monsters/hamartia stand between him and his goal. 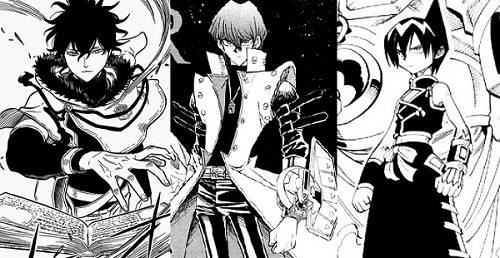 Powerful, angry, and arrogant. Often introduced as a villain who sees the error of his ways after being utterly defeated by the protagonist and teams up with the good guys for the rest of the series while denying that he actually shares their gross “teamwork” values. 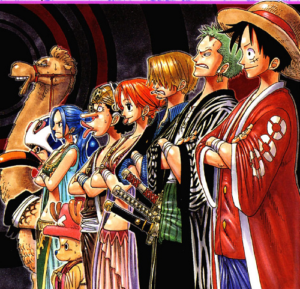 The many and colorful friends that the protagonist makes during his improbable journey, each with their own special abilities or attitudes. Here be troublesome stereotypes: Token Girl! Token Fat Guy! Token Foreigner! But in most cases, I end up loving one of these characters more than I love the protagonist.

A somewhat more varied category than either Protagonist or Antihero, though many shonen villains share Goldfinger-esque habits of keeping oddball sidekicks and setting unnecessarily complicated traps for our hero. Many of them are queer-coded, which, um, is another problematic thing that Japanese comics and the James Bond franchise share.

An excuse for characters to fight each other in a variety of badass ways.

Dragon Ball by Akira Toriyama: This manga didn’t invent the tropes, but it cemented them in the minds of every reader and creator who came after. Love outrageous planet-spanning fight scenes? Thank Dragon Ball. Hate power creep? Blame Dragon Ball. This series is so enduringly popular that in 2016 publisher Shueisha devoted an entire department to brand management… for a comic that ended its run in 1995.

Yu-Gi-Oh! by Kazuki Takahashi: Another staggering multi-media franchise, this time about a bunch of teenagers who save the world with TRADING CARD GAMES and ANCIENT EGYPTIAN DARK MAGIC. It’s just as ridiculous as it sounds, and I love it.

My Hero Academia by Kohei Horikoshi: Izuku wants to be a superhero, but he lacks any special ability… until the popular hero All Might chooses him to inherit his power. A love letter to both shonen fighting/adventure stories and American superhero comics.

As you’ve probably noticed, shonen manga shares many of the problematic norms of American superhero comics, both within the text and among the creative teams. Though mainstream Japanese comics has a relatively high percentage of female creators, this particular genre is still a frustrating boys’ club, with all the sexism that implies. In my experience, the women who do break into the shonen world produce high-quality work with a greater degree of emotional realism, perhaps because they have to work harder to get their place at the table. Both Yumi Hotta’s Hikaru no Go and Hiromu Arakawa’s Fullmetal Alchemist are standouts; Kazue Kato’s Blue Exorcist and Katsura Hoshino’s D.Gray-man are also solid.

So if you’re looking for shonen but you’re weary of the precise tropes outlined above, here’s a few that break the mold:

Rurouni Kenshin by Nobuhiro Watsuki: After serving as an assassin during the Meiji Restoration, Himura Kenshin wants nothing more than to atone for the lives he’s taken, but his mere existence is an affront to the wounded souls he crossed paths with during the war. Not only is the protagonist older than the typical shonen hero by more than a decade, he’s also actively fighting the tide that tries to draw him back into battle.

Claymore by Norihiro Yagi: Magic, monsters, sword-fighting… and everyone is ladies. This isn’t the perfect feminist action comic we deserve, but it is pretty empowering to watch medieval witches save the world instead of spouting convenient prophecy and/or burning at the stake.

Assassination Classroom by Yusei Matsui: The villain is also kind of the protagonist? Or maybe I should say the protagonist is sort of a villain? He’s sworn to destroy Earth if he can’t be stopped within the year, but he’s also a great teacher to the class of high school misfits who have been charged with killing him. Oh, and he’s also a nigh-invulnerable octopus-creature. One of the strangest and most endearing books I’ve read in a long time.

What is your comics sweet tooth? Do you share my love of shonen manga? Drop me a comment because I’m ALWAYS LOOKING FOR RECS.