I was eleven when I picked up a book with a redhead and a horse on the cover, thinking it looked sorta cool. That book was Alanna: The First Adventure, and despite the hokey title, it changed my life.

Alanna: The First Adventure is the first in the Song of the Lioness Quartet by Tamora Pierce, a fierce, feminist fantasy series published in 1983. It’s set in Tortall, a kingdom populated with lords and ladies, knights and sorcerers, and where few people are lucky enough to possess magical Gifts. Since the publication of the Song of the Lioness Quartet, Pierce has written nearly twenty novels set in her Tortall universe. And that’s where things can get confusing—with so many different books and series, it’s hard to know where to start. But never fear! As someone who is a believer of the religion of Tortall and is the first acolyte of the Lady Knight, I am more than happy to offer some direction. 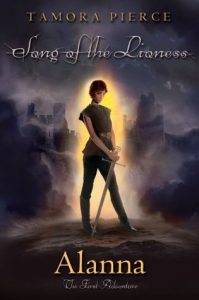 1. Alanna: The First Adventure
2. In the Hand of the Goddess
3. The Woman Who Rides Like a Man
4. Lioness Rampant

This quartet is the foundation upon which everything in the Tortall world is built. The structure is a little unconventional—the first book almost reads like a middle grade novel, since it starts out with Alanna at age 11, but the rest of the series takes her through her teens and early twenties. It tells of how Alanna disguises herself as a boy, becomes the prince’s squire, befriends the King of the Thieves, picks up some deadly fencing skills, and becomes a badass Lady Knight—the first in Tortall. It is, in short, iconic. And did I mention fiercely feminist?

The next series you want to read is The Immortals! 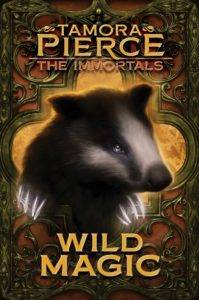 This series follows Daine, a young orphan who has always had a way with animals that made people believe she was a bit funny, until a young mage named Numair recognizes that her abilities are a rare form of wild magic and that she can communicate with all creatures. Which is really helpful when immortal creatures suddenly begin appear in Tortall, some evil and some benign. What I loved about this series is that is expands the world of Tortall, both geographically and magically, and we get to see cameos of our favorite characters from the Song of the Lioness quartet!

After the Immortals, read The Protector of the Small series! 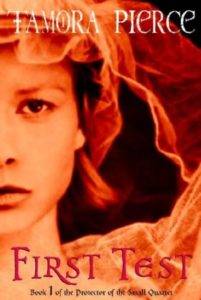 Girls are finally allowed to train for knighthood without having to disguise themselves, but because the patriarchy is hard to overthrow and sexism is the worst, Lady Keladry is the first to give it a go. She faces a lot of unfair standards and is bullied horribly for just being a girl, but this experience gives Kel a passion for standing up for the others, and eventually earns her the title The Protector of the Small. What impressed me so much about this series is that although it follows a similar arc to the Song of the Lioness Quartet, the characters and their stories are very different! Kel’s knight training is marred by a declaration of war, and she is the first character Pierce writes that isn’t magical—her strengths lie in becoming a strong leader and grappling with complex moral issues.

The first three series I’ve covered all follow a similar structure: four books, each with their own arcs, covering the protagonist’s life from about age 12 to late teens or early twenties. But with the Daughter of the Lioness Duet, Pierce changes things up just a bit! 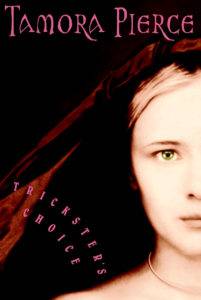 This series consists of two longer novels about Aly, daughter of Alanna. It’s very difficult to talk about the plot of these books without giving away too much from the ending of Alanna’s books—but I can say that these books are very magical, they take place in yet another country in the Tortall universe, they have lots of hijinks, a complicated plot, and so much royal intrigue. I think that this duet is Pierce’s best written, but you spoil the endings of the above three series if you read it first.

All right, remember The Legend of Beka Cooper trilogy I mentioned earlier? 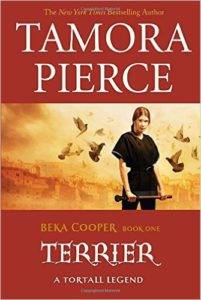 This trilogy is based off of a throwaway line in Alanna: The First Adventure, when Alanna mentions she has heard stories about the last female warrior of Tortall who lived two centuries ago. That warrior is Beka Cooper, who joins the Provost’s Dogs, a sort of police force in Corus, the capital city of Tortall. Pierce employs the epistolary structure for these books, which seems appropriate for a series set in Tortall’s past where Tortall isn’t quite as politically secure, but lets women be indepdent. Beka tangles with criminals of all types with her two mentors, and it’s the first series where Pierce really focuses on the “lower class” citizens that make up this world. Beka eventually investigates a plot to overthrow the crown, and discovers an alarming religious order that seeks to oppress women…explaining why sexism is such a bummer 200 years later.

You could read this trilogy before the Song of the Lioness Quartet without spoiling anything for yourself, and I totally don’t blame you if that’s the route you want to go. I recommend it any time after the Lioness series, just because everything else takes place in Tortall’s modern era and this feels like a nice sidelines series to me!

As the only standalone, we have the short story collection Tortall and Other Lands. I recommend reading this any time after you’ve finished the Daughter of the Lioness series, because it’s got short stories from across all of the series with some favorite characters, plus a few stories not in Tortall at all. 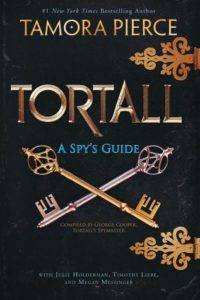 That’s all that’s out at the moment, but Pierce has some exciting new releases lined up for this year and next! Tortall: A Spy’s Guide, will be hitting shelves this October. It’s described as a full color book full of documents about all of your favorite characters, plus a comprehensive timelines of events in in all the series—be still, my beating nerdy heart!

And finally, the long-awaited Numair trilogy kicks off in February 2018 with Tempests and Slaughter (that’s the latest title according to Goodreads…it’s changed a few times)! Fellow Rioter Becky Stone first broke the news last year, so it’s been a bit of a wait. I’m going to go out a limb here and say you probably want to read it after The Immortals series, even though I’m guessing that takes place around about the time The Song of the Lioness Quartet, or maybe slightly before—obviously I need Tortall: A Spy’s Guide for that timeline!

Happy reading! See you in Tortall!