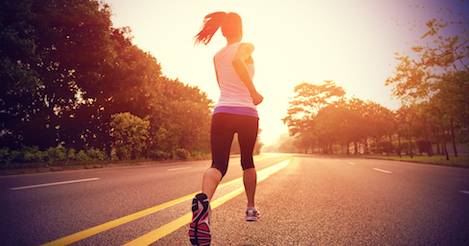 Let’s face it: it’s hard to start running, but often it’s even hard to keep running.

About once a year for the past five years or so, I’ve decided to start running and promised myself to keep it up. I’ve signed up for 5Ks, run/walked/hobbled my way through them, and inevitably given up running shortly afterwards.

Then it hit me–what better way to convince a book nerd to keep running that finding some bookish motivation? People often recommend listening to audiobooks as a way to pass the time, but I wondered what else was out there for book nerds who want to be (or already are) runners.

Here are a few of the ideas I came up with for keeping those bookish feet hitting the pavement.

Did you know that there are online running communities that hold book-themed virtual races?

Virtual races and running communities are especially great if you’re an introvert and don’t like the big crowds at traditional races. With online running clubs, you can feel like part of a bigger community without actually having to run in a huge group. Plus, the virtual races, like in-person ones, each benefit a different charity! And you get cool, book nerd swag!

Hogwarts Running Club is one such community. There is also a Whovian Running Club and a Chilton Running Club, and I’m sure you can Google your way to others–or start your own!

I came across this article about a book club where, instead of sitting and discussing the book, the members go for a run and talk about the book along the way. What a great way to spice up the traditional book club and get your run on!

This one requires being able to actually speak while running, a skill I’ve yet to master, but it seems like a good idea for someone who’s got a more established running practice to keep things fun and interesting.

I’ll admit it–I signed up for a Superhero 5K entirely so that my friends and I could dress up as members of the X-Men. But the side effect of that is that I then had to actually get moving and get ready to run a 5K. To keep yourself in the running game, search for themed races in your city to give yourself a (bookish) running goal to work towards.

Fans of our Book Fetish column won’t be surprised to know there are plenty of bookish tank tops, leggings, water bottles, and more so you can run and rep books at the same time. What better way to amp up for a run than getting to wear something bookish while you do it?

It’s also a good reward system if your wallet can handle it–run a certain number of miles, buy a new piece of bookish gear!

5). Map your Distance to a Bookish Finish Line

One does not simply walk into Mordor… but you could probably do the math on how far you’d need to run to get there!

I’ve seen virtual races that map out the distance to get from one fictional locale to another, and it seems like a fun way to hit new mileage goals. You can find some of these maps online, or create your own!

Calculate how far you’d have to run to get to Hogwarts, for example, or trek across Middle Earth. If you’re artistic, you could even draw yourself a map to track your progress as you run to (or from) your fictional destination.

So, there you have it, a few ideas for putting a little more book into your running life. Let me know in the comments if you have any other ideas–I need all the help I can get!