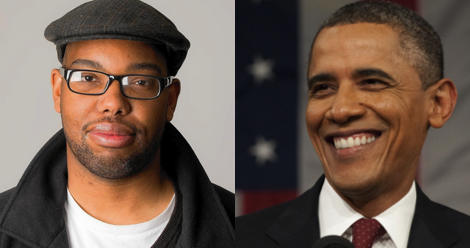 News that James Patterson and former President Bill Clinton are teaming up to write a mystery novel got me imagining what books we could’ve gotten if only other presidents wrote novels. Y’all… we could’ve had some awesome (if kind of weird) novels. I’ve paired ten presidents with ten leading authors alive at the same time. The authors had to have written at least one work of fiction by the time the president left office. Oh, and I didn’t pair anyone with Mark Twain because I just want every president in his lifetime to collaborate with Twain– everyone from Lincoln to Roosevelt!

Barack Obama and Ta-Nehisi Coates: I would 100% read a comic book co-authored by Obama and Coates. Especially after reading “My President Was Black” in The Atlantic. I imagine that they would come up with an engrossing, woke af spin on the entire comic book genre. Obama never mentioned comic books in his lists of reads, but I’d like to believe that he’s read Black Panther in the months since leaving office.

Ronald Reagan and Joan Didion: If these two could’ve spent more than 10 minutes in the same room together, I suspect they could’ve come up with a pretty unique spin on the culture of celebrity and American life. Didion’s essay in “In the Realm of the Fisher King” (collected in After Henry) nailed Reagan’s economic policies. Her writing on Hollywood, like Play it as it Lays, suggests to me that she could’ve done something subversive, popular, and brilliant in tense collaboration with Reagan.

Richard Nixon and Toni Morrison: Just hear me out on this one. During Nixon’s presidency, Morrison published both The Bluest Eye and Sula. Morrison was clearly interested in inferiority complexes, why the powerful refuse to relinquish power, and social order. There’s no doubt in my mind that a Nixon-Morrison writing partnership would be troubled and difficult, but I suspect that Morrison could work with the raw material of a man like Nixon (paranoid, ambitious, deceitful, and crass) to write an insightful novel.

Lyndon B. Johnson and Robert Penn Warren: This is perhaps my dream novelist-president pairing. I’ve written before about my love for everything Warren, so I’m a little biased. However, I think that Warren’s attention to the American south and his interest in Civil Rights, white liberalism, and a certain kind of “good ol’ boy” would make for a fascinating joint effort with the brash LBJ. I know Willie Stark, central character in All the King’s Men, was based on  Huey Long. Still, that probably set up Warren to handle a man like Johnson.

Dwight D. Eisenhower and J.D. Salinger: Salinger seems like the perfect voice to take on the Eisenhower, post-war cultural landscape (as indeed he did in Catcher in the Rye). I can only imagine the conversations between Eisenhower, a war hero and president, and the author who railed against all the phonies. The two of them could have made something great together that celebrated and poked holes in the conformity of the 1950s.

Woodrow Wilson and Margaret Mitchell: This pairing seems pretty likely, actually. Mitchell’s Gone with the Wind is a deeply… lets just say problematic at best, novel and we know that Wilson’s legacy on race is less than stellar.  I don’t want more racist literature in the world but, if I’m being honest, I suspect they’d have written a book that we’d read today as an example of a specific kind of progressive-but-racist, early 20th century art. So maybe it would still serve a cautionary purpose?

Teddy Roosevelt and Jack London: I was surprised to learn that Roosevelt was pretty critical of authors like London, who he called “nature fakers.” That said, I do wonder if he doth protest too much. The tension between these two could’ve birthed an intense epic of masculine, wilderness tales suffused with wolves and manly men being men in the woods.

Ulysses S. Grant and Herman Melville: Possibly unpopular opinion: Grant was a great president who doesn’t get the credit he deserves. Grant and Melville were born just three years apart. The scope of both Melville’s Moby Dick and Grant’s memoirs makes me think that these two could’ve come up with an incredible novel about the American Civil War. Grant once said that, “In every battle there comes a time when both sides consider themselves beaten, then he who continues the attack wins.” If that’s not something Ahab could’ve understood, I don’t know what is.

Andrew Jackson and Edgar Allan Poe: Of course Poe, master of horror and author of the world’s first mystery novel, should’ve worked with Jackson. The president’s Indian removal policies certainly suggest that Jackson was a man without conscience and capable of inflicting tremendous pain and suffering on others. My hope is that Poe would’ve produced something critical of Jackson’s ideology but, honestly, we’d probably just get a tour de force of a creepy, troubled, violent psyche.

George Washington and Jupiter Hammon: This is perhaps the least likely pairing on a list of unlikely pairings. It strikes me almost silly to imagine that Washington would’ve wanted to work with Hammon, an African American and slave, and yet… Hammon’s life as a slave in New York, where Washington fought the Revolution and the nation’s first capital, is a powerful rebuke to many of the Revolution’s stated ideals. Hammon wrote poetry and religious texts, so he’s the exception to the rule for this list of novelists, but I think that he could’ve created a nuanced tale that involved the American origin story, republican theology, and liberty.

What president do you want writing a novel with your favorite author?