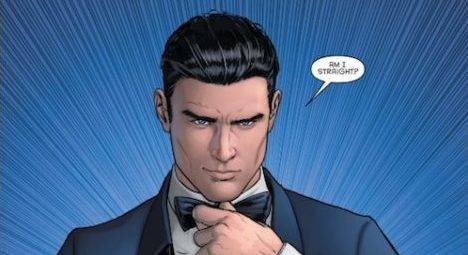 Two weeks ago, DC announced an upcoming miniseries called Nightwing: The New Order by Kyle Higgins and Trevor McCarthy, an out-of-continuity story in which Dick Grayson kills everyone in the DC Universe who has superpowers. My feelings on this can be summed up pretty succinctly:

The context in which @DCComics has chosen to publish a story about a Jewish-created Romani hero committing genocide MATTERS.

CBR describes Dick as “the most pure and true hero in the DC Universe” as a way of explaining why he’s been chosen for this vehicle, and you know what, I get it. Everyone in the DCU loves Dick. (Yeah, I’m getting the obvious jokes out of the way early.) If you’re going for shock value, he’s a shrewd choice. But I think there’s another reason this particular character was chosen for this particular story:

And he’s been doing so from the start. Dick was created in the early ’40s to lighten Batman up and give young readers a character their age to relate to. But he also functioned as a useful story device. Not only could he go on adventures with Batman and give him someone to talk to, he could be imperiled and give Batman someone to save. Suddenly Batman, who has never had one consistent love interest the way Superman has, had a damsel in distress – who happened to be a little boy. Who lived with him. 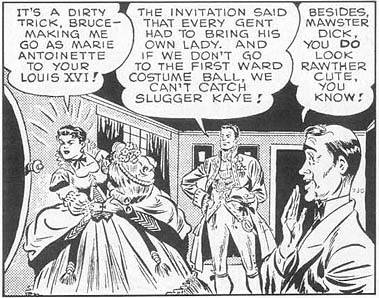 This is from the Batman newspaper strip. I can’t find the attribution for this particular installment so my best guess on art is Bill Finger – corrections welcome!

Psychiatrist Fredric Wertham picked up on this, famously accusing Batman and Robin of being lovers in his book The Seduction of the Innocent. Though Seduction mainly focused on the violence and immorality of the crime and horror comics that were popular at the time, it’s now mainly remembered for this accusation of homosexuality and pedophilia. Dick Grayson – that pretty, bare-legged boy – has been a queering presence in Batman comics ever since. Sometimes this is deliberately played with for subversive intent or for laughs; sometimes female characters are frantically shoved into the narrative to disrupt the potential queer subtext (see: Batwoman, Bat-Girl, a different Batgirl, the TV show’s Aunt Harriet…). But the queering of Batman and Robin, and of Dick Grayson in particular, persists, despite DC’s intermittent attempts to combat it.

Even as Dick aged out of the Robin role, these elements remained: youth, feminization, subtextual queerness and campiness, passivity in romantic relationships. When he shed the Robin role in 1984 – with the support of his taller, stronger, much more aggressive girlfriend Starfire – he does so by stripping down to just the green bodysuit of his costume in front of his entire team. He then grows out his hair and takes on a flamboyant costume with a plunging V-neck, while retaining a non-gendered name: Nightwing, not Batman. 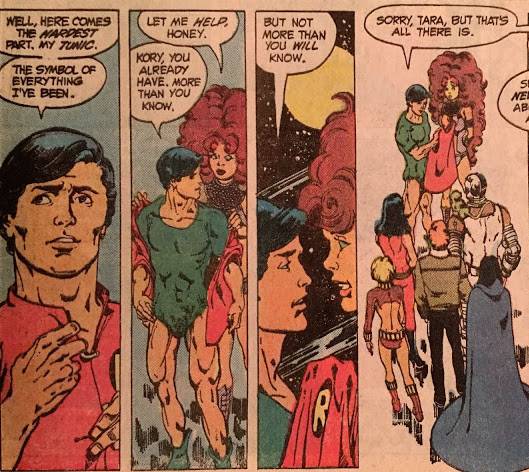 Dick ceremoniously disrobes before his entire team in The New Teen Titans #39 by Marv Wolfman and George Perez.

Two years later, DC published Frank Miller’s The Dark Knight Returns, in which Batman is a perfectly cuboid growling tank of a man and the Joker is a lean, effeminate, creature of pure simpering evil. In this universe where queerness is portrayed as dangerously deviant, Robin is dead (Dick’s successor Jason, but the symbolism remains the same) and is eventually replaced by a girl. Now, Carrie Kelley is fantastic, but it’s noteworthy that in this universe, the only acceptable young and delicate sidekick for Batman must be a girl. (In the sequel, Dick is revealed to have become a Joker-like villain – just as campy and even more destructive.)

Two years after that, DC had the Joker murder Jason Todd in the main continuity – brutally, with a crowbar. Fans could call a 900 number to vote on whether Jason should live or die. The dominant narrative these days is that he was overwhelmingly voted against, but the truth is that the margin was only 72 votes out of over 10,000. Why did it become so crucial that fans believe that everyone wanted Robin to die? 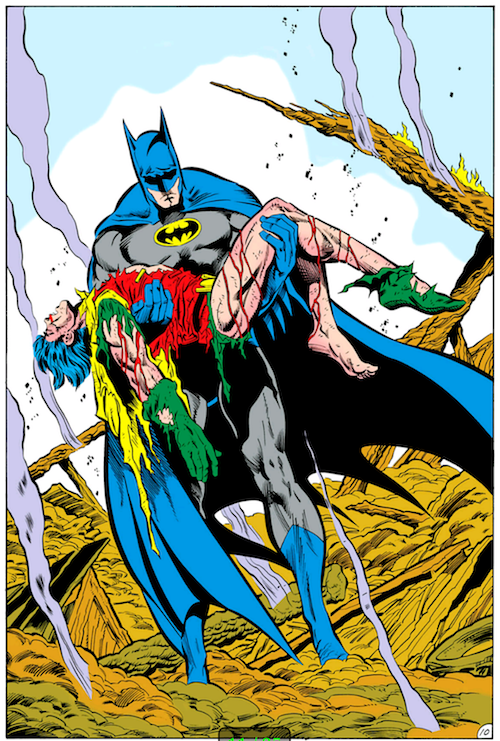 Jason Todd’s corpse is carried bridal-style by Batman in A Death in the Family by Jim Starlin and Jim Aparo.

Jason wasn’t the last Robin to die, either; in 2004, Stephanie Brown, the fourth Robin, was also brutally murdered, this time by Black Mask with a power drill. A year later, Jason Todd returned from the grave as the gun-toting supervillain/antihero Red Hood. That same year, an early preview of the cover of Countdown to Infinite Crisis showed Superman holding a dead hero with a blue tinge to their sleeve. Though the silhouetted hero was eventually revealed to be Blue Beetle, there were prevalent rumors that Dick Grayson had been the planned sacrificial lamb. Rumors persisted through the mid-oughts, as characters dropped left and right, that Dick was next; that the top brass at DC hated him, that his days were numbered.

Why do Robins die in brutal ways? Why must the male ones be rehabilitated as vicious killers? (See also Wayne, Damian.) Why do Dick Grayson fans always feel like the crosshairs are on him? Sure, Robin exists to lighten up Batman and so it makes a certain kind of sense that in eras that trend darker, as the late 80s and mid-oughts certainly did, whoever’s wearing the pixie boots will be first on the chopping block. But I think there’s something additional at play here. 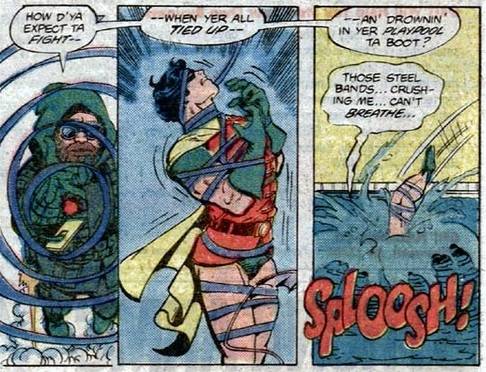 Classic Dick bondage in The New Teen Titans #7 by Marv Wolfman and George Perez. (Be careful Googling that.)

Despite being one of the oldest characters in superhero comics, Dick Grayson is hugely popular with young, female, and/or queer fans. He’s lithe, pretty, and acrobatic. He’s gentle and friendly. He’s about as objectified as male characters ever get in comics; female characters regularly comment on his looks and compliment his butt. He’s sensitive and cries on page semi-regularly. He loves his adoptive father figures and little siblings and isn’t afraid to show it. He dates women who can beat him up and has long-running and deeply intimate friendships with his male peers. Writers who aren’t afraid to let how much they love him bleed through the page, like Devin Grayson and Tim Seeley, also like to dance as close to the edge of his sexuality as the company will let them. For fans who want to see Dick revealed to be textually, unequivocally queer, this can feel like insensitive queerbaiting – but for readers who’d rather keep their comics as straight as a nine-panel grid, it’s alarming. 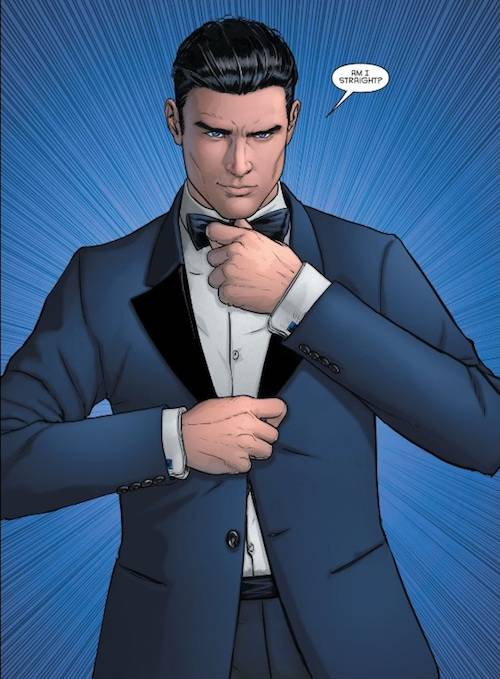 A controversial page from Grayson #9 by Tom King, Tim Seeley, and Mikel Janin.

(It’s perhaps worth noting that Dick was raped (by a woman) during an arc in the early 2000s. It was not a well-handled story and has been largely expunged from continuity, but it’s yet another way that Dick has been coded as female and/or queer within the uber-macho world of comics. You’ll never see Batman sexually assaulted while disassociating.)

As popular as Dick is with large sections of the fanbase, there is a certain breed of reader who hates him. Many fans feel that Batman was ruined with the addition of Robin – you know, the Batman who existed for a whopping 12 issues before Dick’s debut, the one who fought vampires and carried a gun, decades before any of these fans were born. They blame Robin’s presence for ruining the Schumacher movies; he was considered too ridiculous to be included in the Nolan franchise except at the very end, in the most oblique of ways. So many of the men who have shaped Batman in the popular imagination have made snide comments about Robin and the joyful camp he represents: Miller, Burton, Nolan.

I say it’s precisely because of his vulnerability that a certain type of male fan hates Robin. It’s because he’s beloved by young, queer, and female readers. It’s because he’s so often placed in a traditionally female role, because he’s so easy to read as queer, because he’s beautiful and graceful and overflowing with love. If you’re the type of reader who can only deal with enjoying funnybooks about men in tights if they’re carrying twelve guns and breaking each other’s faces, Dick Grayson is quite frankly terrifying.

And all too often, that kind of fan winds up on the inside of the business. That’s why Robins are murdered on-page with particularly brutal glee, and why DC then takes pains to assure readers that really, no one ever liked that character at all. That’s why they’re periodically “toughened up” by turning them into sociopaths. That’s why when the DCU takes a turn for the hypermasculine, everyone assumes Dick Grayson is not much longer for this ink-and-paper world.

And that, I think, is part of why he’s the star of such a violent and tonedeaf series as The New Order. He’s too bankable to kill, so the only other option for rendering sweet Dick Grayson palatable to the uber-bros is to make him genocidal. No, a pitch like this says to Dick’s marginalized fans, you can’t have him. We’re making him into something that doesn’t make us uncomfortable, if only for the duration of this limited series. The fact that mass murder makes some people less uncomfortable than a hero who doesn’t perform hyper-masculinity is troubling, to say the least, but so is the idea of a story like this being published in our current political climate.

The New Order would be tasteless at any time, but to publish it now – to inexplicably attempt to ride the sinking coattails of Marvel’s HydraCap plotline – is particularly crass. It ties a story that would always have evoked the Holocaust, pogroms, and Stalinist purges to a story explicitly linked to Nazism (despite Marvel’s equivocating around those links), and it uses not just a character who, like Steve Rogers, was created by Jewish men at the outbreak of World War II, but one who is canonically Romani – another persecuted minority that the Nazis attempted to annihilate. DC’s clearly hoping to generate sales through shock value, gore, and absurdity, but I can’t help thinking that the fact that the demographics who love Dick Grayson overlap so completely with those who have been the most vocally opposed to HydraCap is an added bonus. It’s yet another attempt to reclaim him from his marginalized fans and recast him in the rigidly masculine mode DC’s current top brass is more comfortable with.

Dick Grayson’s been around a long time. He outlived Wertham and he’ll outlive this too. But that doesn’t make The New Order okay. And the more the industry frantically backpedals away from a more diverse and culturally sensitive audience, the shorter it renders its own lifespan – not Dick Grayson’s.