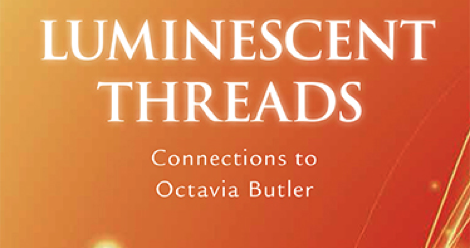 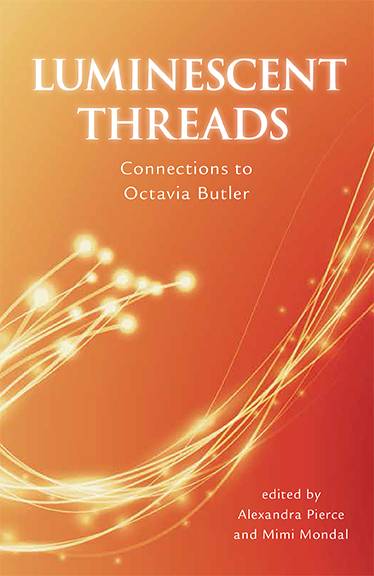 Do you often write dead letters – that you pen down in your journal on nights when you’ve been defeated – to your favourite author? I have done this, and I’m sure, dear Reader, that you have too. We have all bared our secrets and mysteries to our favourite authors at some point. A good thing about this habit is, of course, that at some point, brilliant people like Alexandra Pierce and Mimi Mondal might want to consolidate and publish these letters as a homage to your voice of reason, your favourite author. On the occasion of Octavia Butler’s 70th birthday, Pierce and Mondal are doing exactly that – they have edited and brought out the most comforting collection of letters to Octavia Butler. It is titled ‘Luminescent Threads: Connections to Octavia Butler’ and is slated to release in early August. I was lucky to have had the chance to read the advance reader copy of the book, and speak to the editors.

The idea for the title of the book comes from the Patternmaster, Butler’s first novel – where Teray, a character, senses a pattern that connects all the telepaths and realises that these are “luminescent threads” connecting him to his community. The book attempts to do exactly that – bringing together a community that sees a pattern in Butler’s work, identifies with her writing, and turns to her for comfort.

The anthology is crowdsourced from people who were interested and had worked on Butler – university departments, African-American writing books, and for the editors, the contributor base sort of snowballed into the book as it is now. And diversity is a well thought-out aspect here – the contributors are from marginalised, minority groups who have learned to love Butler because their social spaces seemed similar. All the contributors in the book have personalized connections to Butler – one contributor questions the nature of consent in relationships, and responsibilities of privilege, while referencing Butler’s last book, Fledgling, while another laments the state of America at extant times, four decades since Kindred, while yet another – marginalised contributor – apologizes for resorting to warez to read her works. Each piece is raw, each piece tugs at your heart-strings. Mondal describes the contributions as “extremely heart-baring and vulnerable”. Each letter is a witness to the dependence of readers upon authors – “Your work is a river I come to” says one contributor; “I love you across oceans, across generations, across lives” says another.

The editors, themselves, are also have deep connections with Octavia Butler. Alex from Australia, describes herself as many things – a Christian, a feminist, a teacher, an editor and an amateur astronomer. Alex has co-edited a similar book called Letters to Tiptree in honour of James Tiptree Jr/Alice Sheldon, which has won the  Alfie Award, the Locus Award, the British Fantasy Award, Aurealis Convenor Award, and Ditmar Award; was nominated for the British Science Fiction Award; and longlisted for Tiptree Award. Mimi, on the other hand, is a fantasy/magical realism writer from India, who presently lives in the US and is an ‘itinerant scholar’. She was Octavia Butler Memorial Scholar in 2015 for the Clarion West Writing Workshop, and her book ‘Other People’ is forthcoming on Juggernaut Books.

Their motivations to do this project were fairly different. Alex talks of an academic connection, and the fact Butler’s work and this project has convinced her of the growing and urgent need for diversity. For Mimi, the connection is far more personal – it is only after she had been awarded the scholarship, and began her course at Clarion West, that she realised Butler’s work was so significant for minority writers like herself. When I ask who this project was for – for Butler or for themselves – Mimi and Alex, again, have very different opinions. Mimi looks within and says she was indebted to Butler and her legacy, and for the opportunity the scholarship (unconnected to the anthology) had given her: she did for herself! Alex pursued the project for the many readers out there, who write in Butler’s name, and who wanted a chance to appreciate her work.

While their motivations for the project might have been different, their views on diversity is not. Both speak about the representation of diverse, marginalised people within Butler’s books. Butler’s books have black protagonists who realise and actualise their agency throughout her books, says Alex. Mimi’s answer hits home – Mimi, I, and most Indian readers grew up reading SFF books that had white characters in First World countries that we had never visited; it was difficult to find a way to feel represented or involved. There was always an untempered schism in our minds, as readers, since the SFF scene in India is scanty and remains untouched by international SFF trends. Moreover, it remains controlled by a male-dominated community rampant with misogyny and creates barriers for women writers of SFF.

I also asked the editors about whether they view SFF or speculative fiction differently after engaging with Butler’s work. For Alex, it has been about how Butler writes SFF; she says that in Butler’s books “there’s rarely a situation that is solved for the best with the use of violence”, and how there are multiple ways of thinking about the future, as opposed to the generic explosions and space wars. Mimi says that Butler has challenged the way she imagines things: “Many contemporary speculative fiction writers write stories like that, but Butler was possibly the first – she set the standard. Reading a Butler story isn’t reading the story alone, it’s also imagining all the stories that people like us have never learned to imagine about ourselves.”

Luminescent Threads remains true to diversity throughout – most contributors are from diverse backgrounds, and you can sense their lack of privilege in their letters. There is also a sense of dystopia in the letters, as each of them face a new America, a different America, one that Butler had prepared them for but they’d never thought they’d see.

Personally, I have not known Octavia Butler as much as I’d like to. When I picked up Kindred (my first, and unfortunately only, Butler), frankly, I thought she was a white author! But that’s how the spaces in publication are – we are constantly fed content by upper class-cisgendered-white individuals, and we assume that every book we pick up is automatically by a person we won’t identify with. And most importantly, someone who won’t identify with our struggles and challenges! However, reading Luminescent Threads has changed the ways in which I view Butler – reading the contributors’ letters to her struck a chord in me. Here I was looking within people’s lives, understanding how an author has had so much influence in the way they have lived and loved. It has been an exhilarating experience to know Butler through people whose lives she has touched, and who found refuge in her complex universes.