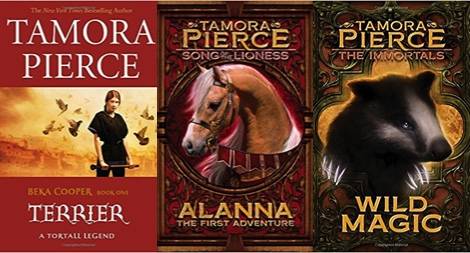 It’s the 4th of July and I’m staring at my phone, ordering every single one of Tamora Pierce’s Tortall books that I don’t already have — and I only own two out of a possible 18 — from Powells.com. Terrier is open to the last page, and I’m denying myself the “bonus chapter” from Bloodhound until I can read the whole thing. How did I get here?

I blame the Insiders. A couple weeks ago in the Epic Forum, we were drooling over the cover reveal for Pierce’s latest addition to the Tortall universe, which inevitably turned into an informal and massive “Let’s all reread ALL THE BOOKS before February 2018!” How could I resist?

A friend gave me Alanna: The First Adventure in my early teens, and I must have read my way through the Lioness Quartet about a hundred times. (I could never decide if The Woman Who Rides Like a Man or Lioness Rampant was my favorite. Perhaps I will figure it out this year?) I didn’t realize (because this was before I spent all my time on the internet looking at books) that there were any others in the world of Tortall until 2011, when I was working a bookstore job at New York ComicCon and got to stand next to Tamora Pierce for an actual hour. Best hour ever. 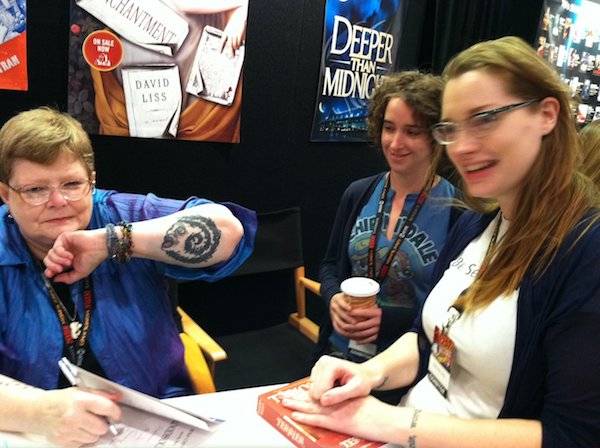 In which we are admiring her tattoos and trying to maintain some chill. My hair really was that fluffy.

Which is why Beka Cooper was the next Tortall series I read. My copy of Terrier is signed, thank you very much! Over the next few years I read some Trickster and some Immortals; I somehow completely missed Protector of the Small. When there are 18 books to get through, these things happen. So for me, this reread is a combination of returning to old favorites, refreshing my memory, and discovering new stories in a world I already love. It’s also a bit of a mental negotiation — I’m not unaware of the ways in which Pierce has been a problematic fave in recent years (google “Agent Carter” and “Tamora Pierce” if you need some details). So many of my childhood favorite books and/or authors have not stood up well to my continuing education in social justice, and I have no idea how well Tortall has aged. No time like the present to find out…

Having just finished Terrier, I find myself surprised at just how much I did not remember! And let there be no mistake: I adore Beka Cooper. I love her pragmatism and intense determination. I love her voice in those journal entries. I love how shy she is. I love how she pays attention and learns — it’s not about being naturally the best, it’s about practicing and observing and trying, always trying. Rereading only reaffirmed that love — and gave me even more joy, because this time I noticed all the other women around her.

If you had asked me to remember the other characters from Terrier, I could have come up with Pounce and Beka’s Dogs (although not their names) and Rosto. I liked Anniki and Kora, but I don’t know that I thought much about them past that. This time, every page I turned there were multi-dimensional, complicated women. Even more than that, each one was different and each one was involved in a different kinds of relationship (albeit, alas, all heterosexual). Anniki and Kora are both with Rosto until Kora is with Ersken; Beka is with no one and she has her reasons; Goodwin is married and happy; Lady Sabine has friends with benefits. Tansy is married with kids and it’s complicated! I am looking at my bookshelf trying to pick out a novel with as many women in as many different kinds of life-situations, and I am genuinely not sure I can. And that doesn’t just count for the protagonist and supporting good-folks; it counts for the antagonists as well. Without giving anything away, there is more than one complicated and villainous villainess in this book. I don’t know if Pierce deliberately set out to include a figurative baker’s dozen of women, but she surely succeeded.

Category ID: 4284
Category ID: 468
What’s Up in YA? Newsletter
Sign up for What's Up In YA? to receive all things young adult literature.
Thank you for signing up! Keep an eye on your inbox.
By signing up you agree to our Terms of Service

Will Bloodhound continue with this theme? Does it go off a different direction entirely? What will I have forgotten about it (probably a lot)? You can be sure I’ll let you know as soon as it gets here. Now where’s that tracking number from Powell’s…

Stray thoughts:
– Intro from Eleni Cooper, OH MY THE FEELS.
– Beka can’t get over how pale Rosto is, which was delightful since normally you only find out how dark characters are.
– This book made me want to eat every pastry ever invented.
– The name Pounce has been re-added to my list of potential cat names, which also include Mogget, Lying Cat, Tailchaser, and Crookshanks.

In case you want to follow along at home, here’s our schedule!
July: Beka Cooper (Terrier, Bloodhound, Mastiff)
August – September: The Song of the Lioness (Alanna, In the Hand of the Goddess, The Woman Who Rides Like a Man, Lioness Rampant)
October – November: The Immortals (Wild Magic, Wolf-Speaker, Emperor Mage, The Realm of the Gods)
December – January: Protector of the Small (First Test, Page, Squire, Lady Knight)
February: Daughter of the Lioness (Trickster’s Choice, Trickster’s Queen)
Optional: Tortall and Other Lands