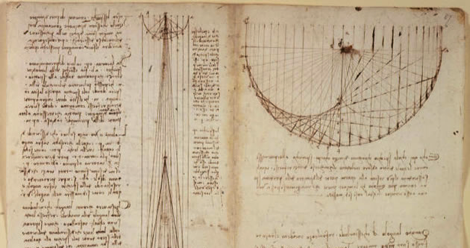 Sponsored by The Heavenly Table by Donald Ray Pollack, new in paperback.

For hundreds of years, the huge, secretive collection of manuscripts remained mostly unseen by all but the most rarified of collectors. After Leonardo’s death in France, writes the British Library, his student Francesco Melzi “brought many of his manuscripts and drawings back to Italy. Melzi’s heirs, who had no idea of the importance of the manuscripts, gradually disposed of them.” Nonetheless, over 5,000 pages of notes “still exist in Leonardo’s ‘mirror writing’, from right to left.” In the notebooks, da Vinci drew “visions of the aeroplane, the helicopter, the parachute, the submarine and the car. It was more than 300 years before many of his ideas were improved upon.”

570 pages of Leonardo da Vinci’s notebooks have been digitized and are now available online.

Scientists at the School of Interactive Computing at the Georgia Institute of Technology are developing a system for teaching robots to learn from fictional characters. With what is presumably a mordant sense of irony, they call their system Quixote. Don Quixote, of course, was the honourable but deluded Spanish gentleman who came to believe that the world was exactly as depicted in the chivalric romances that he loved reading. With disastrous – if comical – consequences.

Okay, but I hope they’re not limiting their selections to classics for numerous reasons.

Based on a 2012 graphic novel of the same name by Dahmer’s high-school friend Derf Backderf, the My Friend Dahmer trailer presents the infamous murderer as a deeply disturbed young man slowly sliding past the point of no return, while those around him miss each and every chance to try and stop him from reaching the brink.