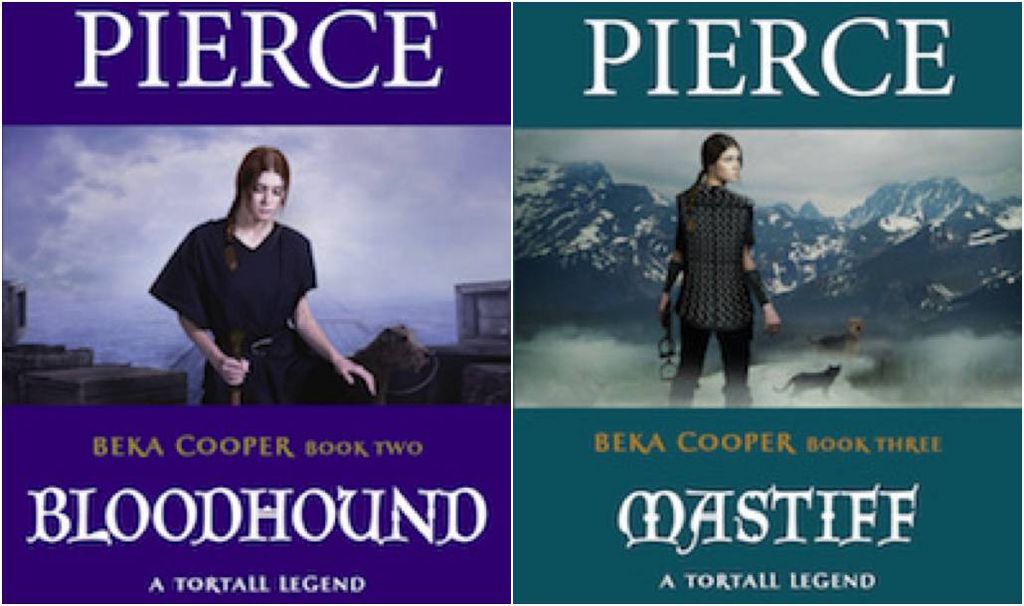 The first month of our informal Tortall reread is winding up, and I gulped down Bloodhound and Mastiff inside of a week. They’re both great reads for many reasons, but I found myself missing the very things that made me love the series so much in Terrier: Beka’s community. 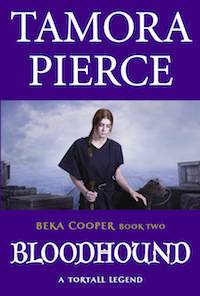 First, a quick recap: Bloodhound delves deeper into the Rogue system as Beka travels to Port Caynn, chasing down the source of the counterfeit coins flooding Corus. Goodwin goes with her, along with Pounce, Achoo, and Slapper, but otherwise we get a whole new crew of side characters. And compelling characters they are: charming Dale; arrogant Pearl; our first set of queer characters on the page, Nestor and Okha (HEART EYES); gamblers, street urchins, idiot nobles, the full complement. While the pacing in Bloodhound is a little slow for my taste, the final scene is triumphant and action-packed, and we see Beka grow in confidence and skill. We also get to see her in a relationship for the first time, and Pierce handles that relationship in a way I wish was more common in YA. It’s so refreshing to see a female character go unpunished for falling for and sleeping with someone, either emotionally or in society at large. 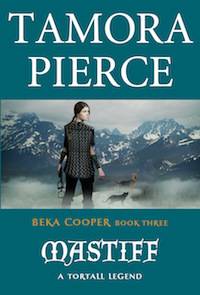 Mastiff is the big finish, and the book in which we understand Beka’s true impact on her world, the reason that a constellation would think it worthwhile to follow her around. It’s a big sweeping plot, one that has been building from Terrier, with high stakes, shadowy conspiracies, and pitfalls galore. This time we got Tunstall and Sabine alongside Beka and Achoo, with the addition of the mage Farmer (#TeamFarmer). The four of them are on the hunt for a kidnapped prince, and the perpetrators are after far more than a new slave or a ransom price. Here we see more of the nobility and the political machinations of Tortall, and it’s not a pretty picture. While I could swear I had read this one already, I apparently forgot a ton of the plot, so this one was more like reading it fresh than a refresh. It’s Beka’s determination and pragmatic nature, the things I loved about her from the beginning, that lead her to save the day, and it felt like a fitting cap on her career as Dog.

All that being said, Bloodhound and Mastiff had nowhere near the emotional impact on me that Terrier did. And I don’t believe the reason is the books themselves; rather, it’s how I’ve developed as a reader. I found myself far more invested in the supporting characters and web of community Beka built in Corus than in the overarching plot or broader world of Tortall. The group breakfasts at her lodgings; the bonds she formed with her fellow new recruits; the developing backstory of Rosto, Aniki, and Kora; the way they all complemented each other, aided in each other’s work, and picked each other up when they fell; these were the things that sucked me in. If Pierce hadn’t done such a good job of providing supporting characters, I probably would have minded far less! And while Beka is not without friends in the following books, or references to the original crew, the stories take her far and wide, away from home.

Which is great, if you want to see how the Court of Rogues works in another city, or what other kennels are like, or what this Gentle Mother nonsense looks like in action, or how the royalty behave. If you had asked me if I would be interested in those things, I would have said, “Of course!” And yet, it turns out that what keeps me hooked is Beka and her found family.

When I was just starting out in bookselling, a colleague taught me one of the first rules of handselling. “Find out,” she said, “if they care more about plot, prose, or character.” I’ve always been a fair mix of all three, and any one element can make or break a book. But when I look back at my favorite books of the last year (The Long Way to a Small, Angry Planet; Ninefox Gambit; What Is Not Yours Is Not Yours; The Prey of Gods; Amberlough), it’s clear to me that character — and more specifically sets of characters — has pulled far ahead in my preferences.

If I reread the Beka Cooper books again, it’ll likely just be Terrier; I love Beka, and love seeing how she’s grown, but I love her best in her lodgings on Nipcopper Close.

In case you want to follow along at home, here’s our schedule!
: Beka Cooper (Terrier, Bloodhound, Mastiff)
August – September: The Song of the Lioness (Alanna, In the Hand of the Goddess, The Woman Who Rides Like a Man, Lioness Rampant)
October – November: The Immortals (Wild Magic, Wolf-Speaker, Emperor Mage, The Realm of the Gods)
December – January: Protector of the Small (First Test, Page, Squire, Lady Knight)
February: Daughter of the Lioness (Trickster’s Choice, Trickster’s Queen)
Optional: Tortall and Other Lands