I’ve always been a collector by nature, which is a problem when you’re a comic book reader. Comic book collecting is not for the faint of heart.

Oh, when I first started reading them, things were fine. I tried a series, I liked that series, I went to my LCS and dug up as many back issues as I could find. I discovered a new character, I trawled the internet until I could get my hands on their entire back catalog. One of my favorite memories in comics fandom is receiving over sixty back issues of Impulse from eBay and plowing through them over the course of one glorious week. It took me years to track down the rest of the series, especially the last holdout, issue #69 (nice), but now I own all 89 glorious issues – plus annuals and team-ups – bagged, boarded, and boxed alphabetically between Guy Gardner: Warrior and Justice League International.

But the years went by, and the boxes multiplied, and meanwhile I was starting new series and discovering new characters. My comic book collecting quickly got out of hand.

I readjusted. I pared down, I donated, I went largely digital. I got it under control.

And then omnibuses happened.

See, here’s the thing: when I got into comics, only a tiny percentage of what was being published on a monthly basis made it into trade. The back catalog was almost completely ignored. If you wanted back issues, you had to track them down, in shops or at conventions or online, and build a collection. 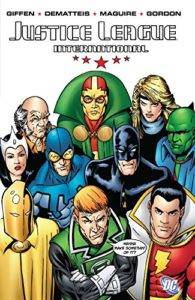 So I did. I spent years building up that aforementioned Justice League International collection, but when DC published the first seven issues as a trade, you’d better believe I snatched that right up.

…And then a few years later they re-released those issues in new trade dress, as part of a series that eventually went up to six volumes.

I couldn’t justify repurchasing Volume #1, but I bought #2-6. (And if you don’t think it drives me nuts that the first spine doesn’t match the other five on my shelf, you don’t know me very well!) 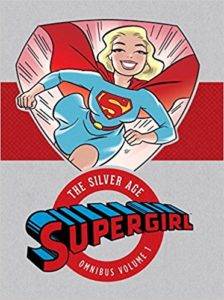 Or consider Supergirl, my all-time favorite hero. For ages and ages, the only Supergirl books available were trade collections of her early 2000s run, which was…uneven, to say the least, and two volumes from the DC Showcase collection. Now, I love the Showcase collections, which reprinted 500 pages of comics in black and white, usually from the Silver Age, and kept the price points in the $10-$15 range by printing them on cheap newsprint. You can’t beat that deal.

But then the show (the wonderful, wonderful show) happened, and Supergirl blew up as a character. Now, I couldn’t be happier about this, or about the fact that DC is now reprinting reams and reams of her earlier adventures. But it does mean that I’ve been staring down the barrel of this $75 omnibus for a year now.

Do I buy the omnibus (and the second volume, which comes out in January)? Do I sell or give away the Showcases? What if there are issues in the Showcases that aren’t in the omniboo? Do I keep both? I live in Manhattan, you guys, I don’t have a lot of storage space! 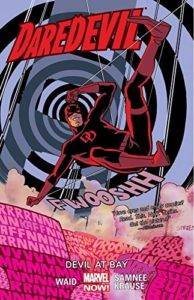 Or what about Daredevil? I got into him because of the Netflix show, and started collecting the then-ongoing 2014 Mark Waid run in trades. But Waid also wrote the 2011 run – really, the 2011 and 2014 runs are the same series, artificially broken up by one of Marvel’s random renumberings – and by the time I got on board, Marvel was already putting out larger hardcover collections of the 2011 series. So now I have part of the 2011 run in hardcover, all of the 2014 run in paperback…and now Marvel’s unleashing fancy omniboo! Plus there’s the stunning Artist’s Edition of Chris Samnee’s unparalleled work on the series. What’s a girl to do?

Oh, and what if they release collections of runs I’ve painstakingly collected in single issues? (Like the previously mentioned Guy Gardner: Warrior! Hahaha I kid, that’s never gonna happen.) Do I get rid of my floppies to buy the trades? Do I stick with the investment I’ve already made? Do I buy the new, keep the old, and eventually die under an avalanche of four-color funny books in my tiny apartment? (Edit: I discovered while adding links to this post that there’s a JLI omnibus coming in October. HELP ME.)

Look, I don’t ask for much. All I want is all of my favorite comics in the most complete, attractive, accessible, and affordable format possible, all at once, so that I don’t ever have to reconsider my prior purchases.

Oh, and they need to be in a beautifully matched set, so that I can buy every volume and lie majestically atop them like a dragon with her hoard.

And it’d be nice if they were signed.

So get on that, comics! In the meantime, I’ll keep fretting over each month’s solicits and watching cartoon flies buzz out of my empty wallet.

Readers, how do you handle new editions of books you already own? What are your comic book collecting tips?