August 12th brings Ducktales, the reboot of the beloved 1990s animated series. The show features Donald Duck, his Uncle Scrooge; nephews Huey, Dewey, and Louie; and compatriot Webby, the biggest Donald fan. The family will go on adventures and “might solve a mystery, or rewrite history,” as the theme song promises. An all-star cast, including David Tennant and Lin-Manuel Miranda, are enthusiastic about the adventures. So are we. This reboot of Ducktales unites several different comics incarnations. We get the Carl Barks comics, the Don Rosa era, the Italian and the English comics. All vary in subject matter, with the same characters.

Donald will face the biggest changes. In Disney animation, Donald exists to entertain. The world throws slapstick at him, he rarely gets a victory, and cute animal sidekicks undermine his authority. Disney comics have this interpretation, and more. 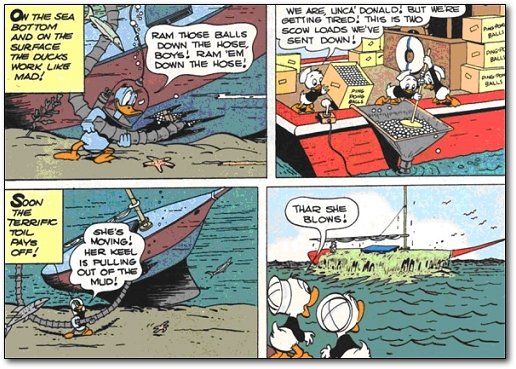 In Italian comics, Donald poses as a violent superhero who keeps the town in order. In English comics, he fights against his bad luck and Scrooge’s penny-pinching. He also has a mischievous streak that he harnesses to care for his nephews. All of these tropes will come in to play, especially Donald’s desire to parent his nephews.

Scrooge will also get more depth. In the Don Rosa graphic novel The Life and Times of Scrooge McDuck, we learned how he became the richest duck in the world. Scrooge has regrets, but he can’t give up his money hunting. He decides to return to adventuring with his nephew’s encouragement. 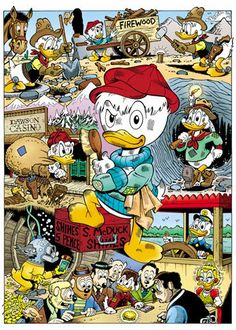 Ducktales aired in 1987, and the reboot airs 30 years later. In the original, Donald had to leave his nephews with Uncle Scrooge when the navy calls. He makes them promise to behave and hugs them. We don’t see Donald for the rest of the series. Scrooge takes care of the boys, and fears them leaving.

The 1990s show tackles issues such as economic distress, cheating clones out of dimes, and family. Scrooge’s desire for more money clashes with his need to protect the boys, while they simply want a fun time at home. The Beagle Boys want to rob Scrooge blind, while Magica DeSpel wants his lucky dime.

We get some major differences. For one, the animation is more stylized. I prefer this, since the story promises a new narration. Also, after the disaster of Powerpuff Girls (which has identical animation to its original cartoon but terrible writing), compromising on style for a better story seems more suitable.

Donald is here for the ride. He takes care of the boys since their mother abandoned them, and he doesn’t trust Scrooge to ignore adventure. Scrooge and he used to travel, and they resume the call to seek new treasures and cities. Donald reveals he can wield a sword against pirates and deflect lasers.

Webby and Mrs. Beakley will also differ. Mrs. Beakley was the oft-frightened housekeeper who would fail to maintain order. Webby, her granddaughter, would be the token girl, to show off her doll and occasional spunk. The new Beakley serves to bodyguard Scrooge and take no nonsense, by nephew or criminal, and Webby wields weapons like a pro. She worships Donald and calls him “the greatest adventurer of all time!” That won’t stomp her from crushing the boys in a nerf dart war, or wielding a grappling hook.

The creators are also welcoming. Frank Aragones, who previously worked on Wander Over Yonder, has answered multiple questions. The entire cast is enthusiastic about the reboot. We have lots of promotional videos, including clips and renditions of the classic theme. Disney wants to court the growing fanbase.

I know what I’ll be watching on Saturday. In the light of Gravity Falls and Wander Over Yonder ending, we need a fun show that promises nostalgia and adventure.