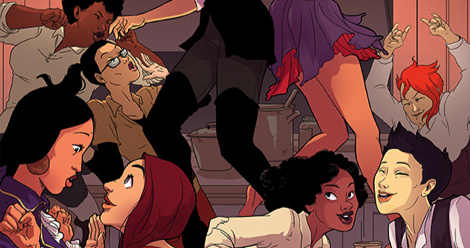 There are a few things I should confess right off the bat: 1. I love pirates, 2. I love queer girls, and 3. I love the Princeless: Raven the Pirate Princess comics. It’s only logical, as PRPP contains heaps of both the first and second. Seriously, though, this comic is my jam, the one I look forward to every month, and I’ve been waiting for a new fix since last December. That wait will soon be over. Princeless: Raven the Pirate Princess Year 2 #1 hits local comic book stores on October 18, 2017. 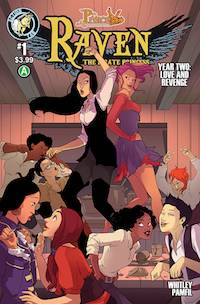 Year 2 returns with a slightly different creative team. Xenia Pamfil, who worked as a colorist on earlier issues, takes over full artistic duties in the new run. You might know Pamfil’s solo series Mishka & the Sea Devil, an all ages comic about a fisherman who ends up on an uncharted island. Jeremy Whitley continues as creator/writer, and is one of the busiest man in comics, with recent runs on Secret Empire, Champions of the Universe, and of course The Unstoppable Wasp (go read it right now if you haven’t, it might be the best comic I read this year), as well as an upcoming stint on Vampirella.

[SPOILERS for Year 1] When we last left Captain Raven Xingtao and her crew, Raven had fought and defeated the goddess Leilani, securing her aid in treating the gravely injured Ximena. Their fight scene is one of my favorite moments of the series, full of both humor and honest emotion. Year 1 ended with Raven acknowledging that she is in love with Ximena, and trying to find a way to tell her.  Year 2 continues shortly thereafter, and from the get go, it seems that Raven’s feelings have not changed.

However, the love triangle that was strongly hinted at in Year 1 is about to be on like Donkey Kong for Year 2. Which brings me to confession 4. I ship Raven/Ximena. Hard. I love them. They have the perfect combination of angst and sweetness. Throwing a flirtatious and determined Sunshine into the mix will definitely complicate things. As they say, may you live in interesting times. 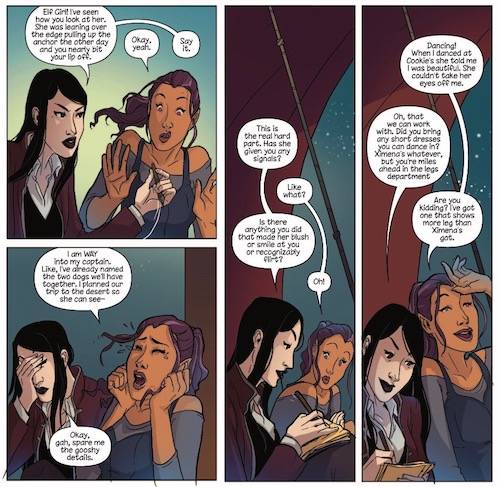 While there’s quite a bit of background, Princeless: Raven the Pirate Princess Year 2 is also a great place to jump into the story. You can pick up issue #1 and be up to speed in the first few pages. This all women pirate crew, bound on a mission of revenge, promises adventure and soap opera, as well as the most diverse cast in any comic I’ve read.