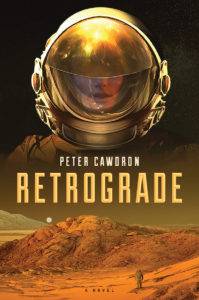 The international team at the Mars Endeavour colony is prepared for every eventuality except one—what happens when disaster strikes Earth?

Mankind has long dreamed of reaching out to live on other planets, and with the establishment of the Mars Endeavour colony, that dream has become reality. The fledgling colony consists of 120 scientists, astronauts, medical staff, and engineers. Buried deep underground, they’re protected from the harsh radiation that sterilizes the surface of the planet. The colony is prepared for every eventuality except one—what happens when disaster strikes Earth?

at Where Traveler, Love Edgar Allen Poe? Head to These 7 Cities

at Unbound Worlds, So You Want to Read Cosmic Horror

at Vogue, What to Read This Fall

at Literary Hub, 10 College Courses to Read Along With This Semester (From Your Couch)

at The Millions, Top 10 Most Purchased Books

at BuzzFeed, 16 Books You Read As A Kid That Were Actual Emotional Torture

at Pop Sugar, 87 Books by Women You Should Read Before You Die