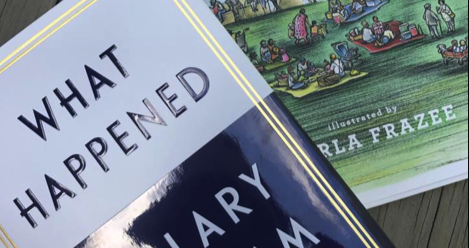 After many tears and much relived anger, I finally finished What Happened by Hillary Rodham Clinton. It wasn’t an easy read. Some of the wounds of the 2016 election are still raw and pulling off the bandage to poke at them a bit hurt more than I thought it could. But it was personally important for me to read. Not exactly cathartic, but something I needed to really begin to work through my anger and towards effective resistance.

This is not going to be yet another thinkpiece about how much right HRC had to tell her own damned story as compared to Bernie and all of the (mostly Y gene bearer) talking heads. This was her story, more intimately experienced by her than any other living soul in our country. Period. There, I just saved you a lot of internet reading and eyerolls.

But, this is Book Riot. So of course, we’re most interested in what exactly this accomplished lawyer, First Lady, Senator of New York, Secretary of State, and first female nominee for President of the United States kicks back with after a long day of fighting the patriarchy. Reading is clearly a big part of the Clintons’ lives. Hillary discusses in her book an intricate book tracking spreadsheet she and Bill use. She talks about watching Bill constantly rearrange their beloved bookshelves. Literature is obviously a central theme to their love story. And HRC proves that through the number of literary references she employs throughout What Happened.

So, if you miss having a literate president. If you aren’t convinced of the genius of The Art of the Deal. And if you’re looking for your next read to inspire you to “resist, insist, persist, enlist,” here is a round up of all of the literary references in What Happened.

But first, I must brag. My 4 year old daughter and I got to meet Hills herself shortly after it was released and got signed copies of What Happened and her new children’s book, It Takes a Village. It was a surreal, touching experience and it (along with her latest book) left me with the confirmation that we all made a very big mistake. But What Happened gave me the motivation to right our nation’s collective wrong. It turns out, I remain forever and always #stillwithher. 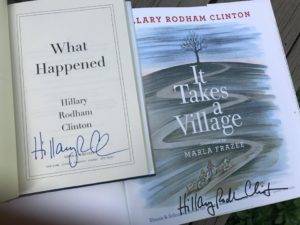 “Invictus” by William Ernest Henley (as quoted by Nelson Mandela)

The Neapolitan Novels by Elena Ferrante

And Still I Rise by Maya Angelou

Help, Thanks, Wow: The Three Essential Prayers by Anne Lamott

The Return of the Prodigal Son by Henri Nouwen

Lean In: Women, Work, and the Will to Lead by Sheryl Sandberg and Nell Scovell

The Destruction of Hillary Clinton by Susan Bordo

The Handmaid’s Tale by Margaret Atwood

A Vindication of the Rights of Women by Mary Wollstonecraft

Bird by Bird by Anne Lamott

The Prophet by Kahlil Gibran

One Hundred Years of Solitude by Gabriel Garcia Marquez

Learning to Drive by Katha Pollitt

Wild: From Lost to Found on the Pacific Crest Trail by Cheryl Strayed

The Mind’s Eye by Oliver Sacks

“The Summer Day” by Mary Oliver

A Letter of Consolation by Henri Nouwen

Locking Up Our Own: Crime and Punishment in Black America by James Forman, Jr.

With Liberty and Dividends for All: How to Save our Middle Class When Jobs Don’t Pay Enough by Peter Barnes

Devil’s Bargain: Steve Bannon, Donald Trump, and the Storming of the American Presidency by Joshua Green

“You Are Accepted” by Paul Tillich

Bowling Alone: The Collapse and Revival of American Community by Robert D. Putnam

It Takes a Village by Hillary Rodham Clinton

The Power of the Powerless: Citizens Against the State in Central Eastern Europe by Václav Havel

A Game of Thrones by George R.R. Martin

The True Believer by Eric Hoffer

Did I miss any literary references in What Happened? Let me know in the comments.