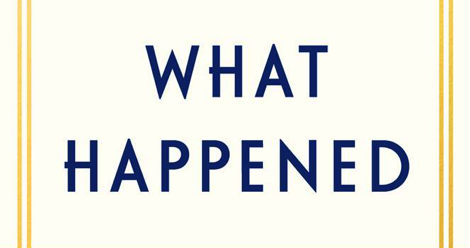 If you’re still wondering who the target audience for Hillary Clinton’s new book is, then perhaps we haven’t met. 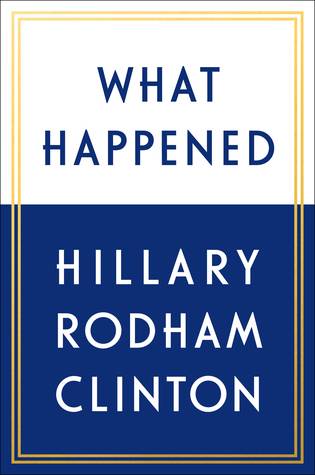 Hello. Allow me to introduce myself: I’m a liberal woman in her mid-30s. I studied history and political science in college. For good measure, I also tacked on a graduate degree in public policy. I read about 100 or so books a year, and some of those books are usually political memoirs. I even have a slot ready for Secretary Clinton’s memoir in the alphabetized “modern feminist memoirs” section of my shelves between Shrill and Year of Yes. I live in DC and spend more hours a week than I’m willing to admit discussing things like the benefits and drawbacks of block grants over $4 glasses of house wine and nachos. (Believe it or not, about 90 percent of DC happy hours have nachos.) I’m pretty much a caricature of what Secretary Clinton’s publisher was hoping for when they signed her contract for What Happened.

And they were absolutely right. This book has been on my radar for months. I already own one copy of What Happened on my e-reader. And I’ll buy another one in hard cover to fill that aforementioned slot once I’m ready to have it on my bookshelf where I’ll see it every day.

Did you catch where this story just took a turn? Because a funny thing happened on my way from the dedication of What Happened to the author’s note: I kept flipping back to my Kindle library and reading a different book instead. It happened three times this last week before I realized I was doing it and had to come to terms with the fact that even though Secretary Clinton was ready to write her book—and she has ALL of my support in doing that, by the way—I’m not yet ready to read it.

I want to be ready for a lot of reasons. Besides all of those listed above, the last year has made me believe more strongly than ever in the galvanizing effect of a shared passion and the sustaining nature of a community. Over the last couple of weeks as I’ve seen friends and peers posting about their plans to read What Happened, I’ve wanted to be right there with them. I want to dig in and have those shared reading experiences of heartbreak and inspiration. I was ready to get worked up all over again about the “Bernie bros” and to tear up while reading about The Concession Speech. Frankly, I also really want to know if she says anything about that amazing meme with Bill and the balloons. I believe whole-heartedly in this person and in the solidarity behind her, and I want so much to want to read this book.

As I mentioned, I was in denial for awhile about my readiness. There was a speaking event in DC right after the release that I was definitely going to get tickets for. Until the window slowly closed and I didn’t. And then—despite all my best intentions to pre-order MONTHS ago—I waited to buy the book until all the internet jerks were jerk-y enough to force the issue. (Or, in the wise words of my friend Megan: “I saw one too many assholes post about how she should shut up, and was like ‘here, take my money.’”) And then there’s the aforementioned failed attempts to get past the dedication.

I know that there are a lot people out there who support Secretary Clinton and aren’t reading this book right now for a variety reasons. I also absolutely understand that the garbage fire of the 2016 election and its legacy burns much hotter and brighter for a lot of other people than it does for someone like me. Dreamers, transgender men and women, refugees, and many other Americans have a whole host of challenges to navigate that I can’t begin to imagine.

I can only tell my own story from where I sit, and where I sit for 40 or 50 or 70 hours a week is at a desk with a dysfunctional computer monitor, no paper clips since April, and file folders I brought from home. Because the other reason that I’m the perfect audience for What Happened is that in my day job, I work in public service.

Working in public service on behalf of people who don’t always have the opportunity to ensure that their rights and interests are represented in government is the only thing in my adult life that I’ve been consistently certain I want to do. I don’t think it’s any better or worse than any other career or choice generally; it’s just the one that I’ve always known was mine, what some might call a vocation. So I set public service as the northern star of my life path more than a decade ago, planted the seeds for a future focused on that goal, and moved 3,000 miles from the rest of my family to pursue it at the ripe old age of 24. Although those decisions haven’t always made things easy, they put me on a path to do a lot of things I’ve found rewarding and to meet and befriend a lot of extraordinary people.

But the last year has not been kind to public servants. The 2016 election was an indictment of public service unlike anything I’ve seen in my life and frankly unlike anything I’ve seen in my study of modern US political history. (Although I guess to be fair I should mention that we were short on paper clips and file folders long before 2016.) Given that, in many ways, it would make even more sense that I would turn now to What Happened, which is a book by a woman who is undoubtedly an exceptional public servant. This book might even feature a more inspiring “public servant recovers from devastating defeat” storyline than season 6 of Parks & Rec, and that is saying something.

But as a reader, I have to be realistic about what I can and can’t get from a book. The truth is that for me, there’s nothing Secretary Clinton can write that is going to change the fact that tomorrow, I need to be ready go to work again and spend the day and possibly the night and weekend trying to protect programs that I believe in from being dismantled by an Administration that doesn’t understand them. Whatever catharsis, inspiration, or solidarity reading Secretary Clinton’s words might offer, in the aftermath of the 2016 election, there’s nothing I can read in What Happened that will—for me—negate the fact that a country that I have built my life around serving has elected a President who has absolutely no interest or faith in that service.

If I could offer 24-year-old me the chance to take a different path, I wouldn’t consider it for  second (besides maybe offering a few tips about which happy hour has the best nachos). There’s also no doubt in my mind that whether it’s next month or next year or five years from now, I’ll eventually read What Happened. The dedication is a very promising start, after all, and I should know—I’ve read it three times.

But despite knowing that I wouldn’t change my past and that I have a vague sense of my future, What Happened isn’t the book for my personal present. I like to believe that of all people, Hillary Clinton, a woman who has dedicated her life to public service and who has had her heart broken by it more than once, would understand why not.