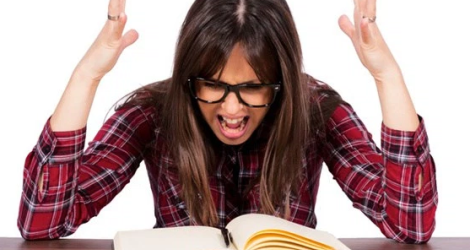 After a stressful week I found myself putting down almost every new book I picked up, and rather than continuing this depressing trend I decided to ask fellow Rioters about their automatic DNF (Did Not Finish). Because while things like stress, schedules, health, natural disasters, spending most of your time resisting an administration can cause a major slump in reading, sometimes there are very definitive things we refuse to read which is the cause for our putting down a book. Here are some Rioters and their automatic DNF:

The older I get the easier it is to abandon a book. Why waste time reading a mediocre book when I could be reading a great one? I even quit well-written fascinating books if they aren’t about something I care about. We have no shortage of writers with amazing writing talent, or exceptional books. I judge books by two criteria. The first yardstick I use is borrowed from the film The Matrix. Does the book show me more about reality or does it hide it (red pill v. blue pill)? The second rubric is whether a book expands my knowledge on my favorite subjects. I wasted too much of my youth reading purely fun books. At age 65, I want to know more about reality before I depart it.

I used to have this sort of feeling that I was betraying a book—and myself—if I didn’t finish it. No matter how bad the book was, or how boring, I would carry on reading it. Sometimes I would spend a great amount of time reading a book I didn’t like, and dragging the reading, because I wanted to finish it before starting anything else. Nowadays, I have so many books on my TBR pile that I really don’t think bad books deserve the time I would waste on them. I’ve finished a few bad books, waiting for the moment when the story would change and become interesting, and sometimes I do get lucky in this aspect, but mostly, if the writing is bad or the story keeps dragging and nothing happens, I just put down the book and I move on to another. I don’t regret having finished a bad book, but the time I’ve spent with bad books so far has taught me better than to carry on reading them these days. I’m sure I won’t miss the stories I didn’t like in the first place.

I have a TON of these. One of the major ones is if there’s a prologue, but instead of labeling the prologue as such, it is called “Chapter One.” This is a giant red flag that the author has no idea what they’re doing, plus it makes me go into a rage spiral because I really, really hate prologues. Immediate DNF. Also, if I fall asleep three times in a row reading a book, it’s going buh bye. I have better things to do than read stuff that bores me.

To paraphrase a line from one of my favorite animated movies, “I do not read fast.” But I’ve also got major canine completion syndrome when it comes to books. If I start it, I’m finishing it and I’m in it for the long haul, no matter what. If the author takes 100 pages to introduce us the characters before touching on the plot? I’m finishing. If the POV is switched halfway through and we’re treated to four chapters of esoteric mathematical theory after spending the first part of the novel racing spaceships? I’m finishing. But introduce female characters who are described only in physical terms and “developed” emotionally by talking about how they react in a hyper-sexual manner to the macho male protagonist? Yeah. No. Hard pass. Underdeveloped “window-dressing” female characters were a hallmark of genre fiction when I was growing up in the 80s and fed into an unenlightened, hormonally-coked-out view of the opposite sex. Fiction has matured, we have matured as a society, beyond making a female character’s defining feature how good she looks in her (always skin-tight) outfit and whether or not she’ll sleep with the main character. If I’m going to spend weeks in a world, I’m not going to settle in to a place that makes my skin crawl whenever I pick up my Kindle.

It seems sort of simple to me, but I bail when I’m bored. I can stand a lot of terrible things. I’ll even hate-read things that have a horrible case of -isms (racism, sexism, ableism) just so I can shout from the roof-tops the proof of their grossness. BUT if nothing is happening, I’ve been known not to make it even a twenty pages in. I’m much more likely to hate-read something that is offensive—and give it a howler of a review—than to give any time to something that puts me to sleep.

Boredom or utter frustration with the writer. Also a lack of accuracy about violin playing. (I got violin lessons since I was six; while I haven’t played in ages, the memories die hard.) If you don’t know how to play violin, that is fine, and there are ways to wing it. But if you don’t show any knowledge about what violin playing involves, then I won’t read your book. Or if I do read it, I will judge you forever.

I’m shallow. If a writer uses lots of short sentences, particularly lots of sentence fragments, I can’t deal. That staccato rhythm is just profoundly grating to me. I can think of at least one universally beloved novelist whose hugely acclaimed book I had to stop reading, for precisely this reason.

Unintentional sexism. By that I mean the author is sexist in the way he/she handles the material. I’m fine if the character is sexist and unlikable as long as I can tell that the author knows that the character is sexist and unlikable. Does that make sense? For instance, I’ve abandoned books where the author describes women’s breasts over and over. Like, every time a woman appears. Even if her breasts have already been described. Um, no. Most recently, I DNF a book where the main character’s storyline centered around whether or not she was going to be raped, and meanwhile she’s thinking about finding romance with other members of the community, and you never really get the sense that rape is trauma, and would cause a lot of trauma. I abandoned that one halfway through. There are so many unread books out there. I know what breasts look like; I’ll read something else, thank you.

As for me I’m done reading the casual -isms. I don’t mean books that show the prevalent racism, sexism, homophobia, Islamophobia etc in our society. It would be strange and just as harmful to pretend none of these issues exist in books, but when the actual text is in fact casually racist—like a mystery filled with good white characters and the only POC is the “bad guy”—I’m out. When an author describes every male character quickly by just hair and skin color but women get described by every single inch and curve of their bodies I’m annoyed—once it crosses into “she was 40 now but you could still tell she was once hot” I’m out. I’m not here for authors who use their characters to slut shame women or rant against fat people when there is no push back. I don’t have time to read books about marginalized characters that are stereotypes the author most likely grew up watching on TV. There’s just too many books I want to read to waste any more energy or time.

If you have an automatic DNF please tell me because I’m dying to know what it is.