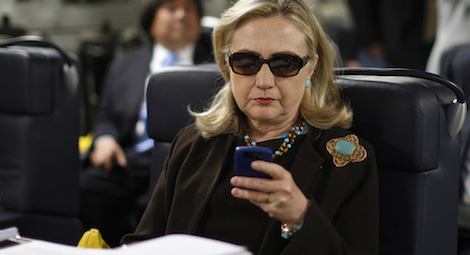 In a recent Washington Post interview, Hillary Clinton made an offhand comment about romance novels that struck readers the wrong way. As part of an answer regarding the recent wave of sexual assault allegations, Clinton—with the verbal equivalent of a dismissive gesture—lumped romance novels in with a culture of masculine aggression towards women. She condensed the entire industry to the single image of ” women being grabbed and thrown on a horse and ridden off into the distance.” I guess it’s been a while since she read a romance (since at least the 1980s, by the sound of it). Most modern readers could tell her that the genre these days is populated by strongly feminist romance novels—no “grabbing” necessary.

(Unless consensual. Of course.)

Clinton’s treatment of the genre is, at the very least, disappointing. As a supporter of women’s right, you would think that a genre by, for, and about women would meet with her approval. In particular, a genre which in recent years has produced a wide variety of romance novels, featuring increasing levels of racial and sexual diversity and social insight.

Maya Rodale—a frequent defender of the genre—shared her thoughts about Clinton’s dismissal of the romance genre. She ended by issuing a challenge to Romancelandia: recommend some #RomanceNovelsforHillary. So readers and authors alike chimed in on twitter to help fill Clinton’s TBR.

Some tweeted specific romance novels, with political themes or complex female characters that they thought HRC would appreciate:

Category ID: 4284
Category ID: 475
Kissing Books Newsletter
Sign up for Kissing Books to receive news, book recommendations, and more for residents of Romancelandia.
Thank you for signing up! Keep an eye on your inbox.
By signing up you agree to our Terms of Service

Dear @HillaryClinton, I also loved @The_Julia_Kelly's feminist sculptor in The Look of Love. You should really check it out. https://t.co/MX0xEbQFov #RomanceNovelsForHillary

I love the idea of suggesting #RomanceNovelsForHillary. I think she should start with A Week to Be Wicked by @TessaDare and Sleeping Beauty by Judith Ivory.

We are the writers who know #RomanceResists. We are writing stories right now in support of the resistance. Check out @TessaDare's The Duchess Deal. #NeverthelessShePersisted #RomanceNovelsForHillary

Alexandra Haughton even got into the spirit of the season:

Others couldn’t pick just one romance:

#RomanceNovelsForHillary
Any of these authors but especially
Not Quite a Lady & The Last Hellion @2nerdyhistgirls
Flowers in the Storm @LauraKinsale
Not Quite a Husband, My Beautiful Enemy, Private Arrangements @sherrythomas
Indigo @authorMsBev
The Duchess War @courtneymilan

And some offered up the whole backlist of their favorite progressive romance authors:

HRC should start with the books written by Selena Montgomery (aka Stacey Abrams who addressed the DNC convention last year. Oh and, is currently running for GA Governor) https://t.co/Vv6ksccqsZ #romancenovelsforhillary

It was books by @Kristan_Higgins that got me hooked on romance novels. No horses or sunsets, just relatable stories about smart, strong, funny, resilient women. #RomanceNovelsForHillary

I would humbly suggest anything by @sarahmaclean – love, empowerment, and cultural relevance set in lush historic beauty. Her works are both an escape and a reality check. #RomanceNovelsForHillary

Even romance publisher Avon got in on the fun:

Aside from being an excellent list to stretch any reader’s TBR, the books recommended go far beyond any of Clinton’s expectations for the genre. In fact, the collected list is a perfect slice of the modern romance genre: alive, thriving, and constantly evolving.

So yes, occasionally a heroine still gets tossed onto a horse. But these days she’s just as likely to pick up the reins and ride for herself. Maybe not towards the sunset, but definitely towards a better future. Because that’s the promise of truly feminist romance novels: you don’t just get to live happily ever after, you get to do it on your own terms. And on your own horse.

I would think that’s something that Hillary Clinton could appreciate.