December: the month when readers look angrily at their calendars every day and think, “But how I am supposed to finish all the books I wanted to read this year?!” And stare at that little tracker bar on Goodreads with a rising sense of dread, since it is definitely not hovering where it should be. And start to panic.

If that sounds familiar, or (since it doesn’t actually matter how many books you read in a year, as long as you’re enjoying them) if you’re just looking for some excellent short comics to enjoy on a cozy winter evening—look no further. Here are seventeen fantastic short comics that you can read in an afternoon. If binge reading is your jam, you could probably read all the comics on this list in a weekend! Because, I promise, you’re going to want to read them all: these ones are good.

Short comics without any forthcoming issues or sequels! These are stand-alone stories that you can enjoy in one sitting. No cliffhangers, no unresolved story arcs, no wondering but what happens next?! Curl up in your favorite nook with a hot beverage and let these amazing comics transport you.

Princess Princess Ever After by Katie O’Neill (58 pages)

Two princesses go on adventures, use their smart brains, rescue each other, and find love (with each other, duh). What more could you possibly want from a 58 page comic? 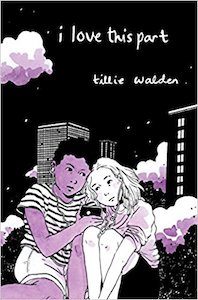 I Love This Part by Tillie Walden (65 pages)

A quiet, bittersweet love story about two teenage girls who hang out, share earbuds, go on walks, and have text conversations. It sounds mundane, but the art is truly spectacular. There aren’t very many words; the drawings carry the bulk of the story and it’s really stunning.

I Thought You Hated Me by MariNaomi (67 pages)

This lovely little black and white graphic memoir is an honest and funny portrayal of thirty years of friendship. MariNaomi beautifully captures the simple moments that define friendship through childhood, adolescence and adulthood: passing notes in class, sleepovers, all-night diners, chatting over wine. 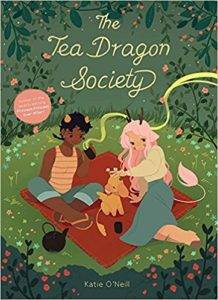 This short gem ranks among my favorite comics of 2017. Greta is an apprentice blacksmith who  stumbles upon a lost tea dragon. When she returns it to its owners, they welcome her into the gentle and loving world of the tea dragon society. A comic about belonging, the art of making things by hand and within community, and the joy of simple pleasures, it’s a magical, glittering, cozy, queer joy of a story. 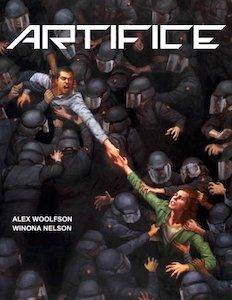 A sci-fi love story between an android soldier manufactured by a powerful corporation and the human soldier he was sent on a mission to kill. The depth of the world-building in this 111-page story is phenomenal and the art is stunning. It’s just all-around fantastic storytelling.

When the king of Mancastle and all his knights are eaten by a dragon, Mancastle becomes Ladycastle: the women happily take over. Merinor the badass blacksmith becomes king and the old king’s daughter (who he’d kept locked in a tower for six years) Aeve her best champion. After King Merinor turns a backwards patriarchy into a cooperative and egalitarian society, the women of Ladycastle work to defeat the wave of monsters that threatens their kingdom. Libraries and tea parties are involved. Oh, and they sometimes sing while fighting. And if none of that sold you, there are fun and playful references to everything from Shakespeare to Harry Potter to Hamilton to The Princess Bride. 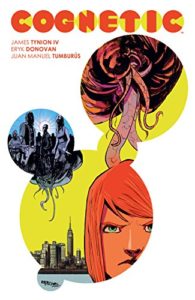 An ancient and all-powerful psychic being descends on modern-day New York City seeking world domination. Sound a little cliche? IT IS NOT. The story builds quickly and fiercely, the characters were fascinating, and I was constantly surprised. Also: chilling, creepy, incredible artwork.

These comics are all first volumes of ongoing series. You can easily read these books in one (or two) sittings, but beware: you’ll be hooked. If you’re looking for some excellent quick reads to finish out the year, these’ll do the trick, but they’ll also explode your 2018 TBR with volume twos and threes and fours. Don’t worry. Take a breath. It’s a good thing!

This comic is set in a terrifying future where young poor folk are branded, enslaved and shipped offworld to a dessert penal colony. Once there, they’re either forced to work in dangerous ice mines, or to survive as best they can amid the gang warfare, poverty and exploitation of Concrete Park. It’s dark, but full of fierce and resilient characters, explosive and sometimes-dizzying art, and sharp social commentary about race, gender, and urban life. 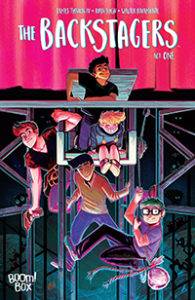 The Backstagers by James Tynion IV and Rian Sygh (109 pages)

A group of queer boys at a (not very awesome) all-boys boarding school find friendship and belonging as part of the stage crew for the school’s (very prestigious) theatre department. Unbeknownst to the rest of the school, there’s a whole world of magic backstage, full of strange creatures, odd inventions, constantly shifting hallways, and mysteries galore. This book is a beautiful antidote to toxic masculinity. These boys are gentle and kind and loving; they cry and hug each other and express their love, fear, doubt, and joy without shame. It is AWESOME.

This book is worth reading just for the scene where the badass heroine Raven utterly destroys a group of men trying to mansplain at her. But also: did I mention that said badass heroine is a queer woman of color and that her pirate crew is a group of smart, strong, kickass women? Adventure + feminist pirates = READ NOW. 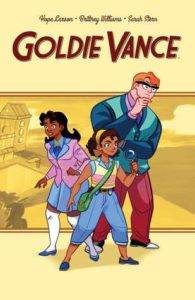 Goldie Vance lives with her dad at the Florida resort hotel he manages. The resort houses an in-house detective service. Which is pretty great, because Goldie Vance is really good at solving crimes. So she does that. With a lot of humor and pluck, and some help from her circle of friends and colleagues. Everything about this comic is delightful.

I honestly did not expect to love this roller derby comic as much as I did. I have some friends in derby so I’ve heard how awesome, empowering and all-consuming it can be. But this comic wasn’t just a fascinating introduction to derby culture. It was also a sweet and scathingly honest story about female friendship, competition, and finding your voice. Also: incredible artwork featuring badass derby women.

What’s not to love about an intergalactic cooking completion? When a producer for the reality TV show Space Battle Lunchtime whisks Peony away from the bakery where she works and onto a spaceship, she has to contend with bizarre celestial ingredients, feuding alien chefs, and the high-pressure world of galactic cooking. With wildly colorful and creative art, this comic is zany and fun and had me laughing out loud. 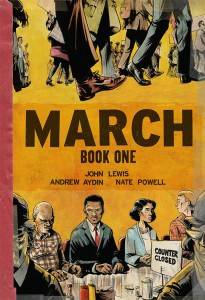 The first book in John Lewis’s acclimated trilogy about the civil rights movement is powerful, insightful, moving, and gorgeously illustrated. It’s both a history of one of the most important social movements this country has ever seen, as well as one man’s personal journey of transformation.

Kamala Khan is just an ordinary Muslim teenager from New Jersey, until she is suddenly gifted with superpowers, and has to deal with the surprising and sometimes-overwhelming consequences. Kamala Khan is a modern superhero heroine for the ages. You don’t want to miss out on her awesomeness. 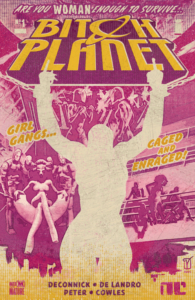 Set in a chilling future that feels a little too familiar, patriarchy and misogyny are the law of the land, and non-compliant women (read: women who think for themselves and enjoy being treated like human beings) are shipped out to a truly terrifying off-world prison. This comic is dark and smart and beautiful and scary all at the same time. 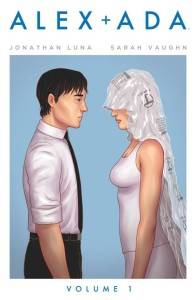 When Alex’s grandmother gives him an android for his birthday, he’s not sure what to think. Androids are a normal part of life, but he never wanted one. Plus, Ada…doesn’t have a personality, and it’s kinda weird. Not sure what to do to, he stumbles upon an underground world of humans and robots who believe that not all sentient life is organic. It took me a little while to get into this comic, but I was hooked by the end.