This is a guest post about A Wrinkle In Time from Nancy Snyder. I am a California native who still resides in the Golden State. After studying at San Francisco State University, I began my life working for the City of San Francisco as an administrative assistant while also working as a union organizer and officer. I have written extensively on labor history and the labor movement, books, politics and women’s issues. Besides my daughter and my two small granddaughters: reading and writing remain my all-consuming passion. 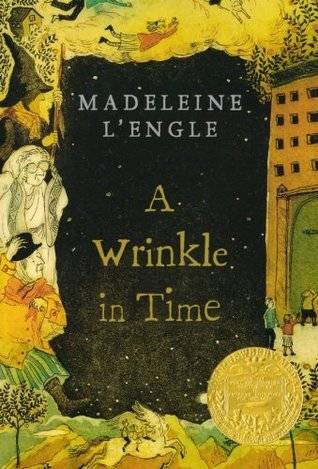 I gave myself the best Christmas present ever: I reread A Wrinkle in Time by the Christmas tree. The experience was akin to visiting my oldest and dearest friend. I became reacquainted with the first book that was my reading obsession.

A Wrinkle in Time was read to me in the fourth grade. A few years earlier, the book had won the Newbery Medal, and my teacher, Ms. Lloyd of Overland Avenue Elementary School, was particularly fond of the book and read it with delight. This enthusiasm was soaked up by my young reader self. I wanted to read this story on my own.

What I adored about A Wrinkle in Time was the adventure. I loved Meg Murry and all of her faults, Calvin O’Keefe as the steadying force of calm, and the preternaturally brilliant and witty younger Murry brother, the inimitable Charles Wallace.

I was never a science fiction or fantasy enthusiast; I simply believed everything in A Wrinkle in Time was true. Such a thing as intergalactic travel was possible: all one had to do was master the art of “tessering” and to know unusual Mrs. Whatsit, Mrs. Who, and Mrs. Which. Simply because most of us had not had this opportunity did not rule out these possibilities that such a journey was, indeed, very probable.

My young reader self was not satisfied with merely checking the book out of the library. I needed A Wrinkle in Time by my side at all times to satisfy my emergency reading needs. For $3.25 I bought my first book, and this original edition of A Wrinkle in Time was beautiful.  The book had the top pages tinted a lime green to complement the dark blue cover.  The profiles of Meg, Calvin, and Charles were trapped in their own concentric circles against this blue background.

My first love became my first accessory. Despite whatever may have been on the fifth and sixth grade syllabus, A Wrinkle in Time was there with any school papers. This first copy had my dirty thumbprints imprinted on the clean back cover from my times playing handball.

This first copy of A Wrinkle in Time did not have a picture of its wonderful author, Madeleine L’Engle. While living in San Francisco in 1992, the American Booksellers Convention came to town. Given my work at the San Francisco Public Library, I received a pass to enter the convention. It was then that I saw the glorious L’Engle who wrote the book that contained everything important to me when I was younger.

Like millions of other readers, I felt I owed Madeleine L’Engle a tremendous amount of gratitude. If I did not have A Wrinkle in Time in my life, I simply did not know how I would have managed life with all of its problems and glories.

Just seeing Madeleine L’Engle was a gift.  She was tall and wearing a long purple and mauve caftan—simple yet elegant.  She exuded calmness and a self-assuredness that I wanted to own. I can still imagine her, and when I do, the gracefulness and intelligence that was Madeleine L’Engle comes back to me as a gift.

Sitting by the Christmas tree, I realized how prescient I was to choose this book as a guide for life. After at least twenty readings of this book as a youngster, I internalized the L’Engle wisdom to my great advantage. Meg used her anger to conquer her fears: she needed to stay angry and stubborn and outraged to rescue her father. If she had focused on the impossibilities of her journey, she would not have even left the planet.

I attempt to imitate Meg. I realize when to stay angry at the injustices enveloping us and when to let the anger go to focus on the solutions.

Meg was the ultimate outsider and consistently challenged authority; society would have us believe these are disagreeable personality traits that need squashing to become successful.

A Wrinkle in Time showed the strengths of such faults: that being the outsider can lead to great adventures and to question authority can change the world.

I aspire to be the great communicator as was Calvin O’Keefe’s strength. I also aspire to the great intelligence of Charles Wallace. However, I am aware of the warnings of Mrs. Whatsit: Charles’s magnificent intelligence may also be accompanied by arrogance and pride, something to check ourselves of when we are convinced that our intelligence is infallible.

I just have one bit of advice to the young and old who fill the theaters: regardless of how extraordinary the movie will be, read the book first. The book is always better.

Psst: For more of our coverage of Engle’s book, check out our archives here.

News and recommendations from the world of kit lit and middle grade books.
Thank you for signing up! Keep an eye on your inbox.
By signing up you agree to our Terms of Service
#Children's#A Wrinkle In Time