An introverted child, my access to books included Scholastic order forms, Christmas, libraries, a Reader’s Digest stack in the hallway half bath, and grocery-store endcaps—once defined by candy and the mass market comics featuring Archie Andrews and the gang. A young reader of the series, my retained knowledge resembles brain soup. Betty and Archie. Jughead and burgers and Hot Dog. Josie. Sabrina. Memories lap and lurk in the recesses of my mind until something calls it up. 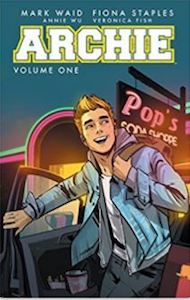 After finishing Stranger Things 2, a big TV show-shaped hole appeared in my life. Inundated with amazing buzz following Riverdale’s summer run on Netflix Instant, I binge-watched an amount of episodes I won’t disclose here in one wide-open night. Twin Peaks-esque with all that fog, a staple diner, and Mädchen Amick, the show’s ambitious. Loosely based on Archie Comics, it explores class, racism, sexual fluidity, guns, assault, addiction, mental health, and a generations-old feud, among so many other things. After the murder of high-school football player Jason Blossom, Archie and friends reckon with and investigate the busted façade of their small town.

Working steadily and obsessively since the age of ten left little room for programs, so I’m used to TV show-shaped holes in my life. Missing out on every teen drama from Dawson’s Creek to Gossip Girl, my love of Riverdale is visceral. It feels necessary, luxurious, like I have arrived.

Amid mid-season 2 finale noise surrounding the Black Hood, I found myself satisfied. In a show packed with characters and storylines, I counted on a cliff-hanger. I actually count on every episode being suspenseful, and I’m enjoying the 22-chapter ride. My questions arrive like tidal waves. Will Cheryl Blossom seek help for her PTSD? Are the Pussycats, Valerie Brown and Melody Valentine, beginning a two-piece band after Josie McCoy burned them? DID JUGHEAD JONES REALLY SCRAPE OFF PENNY PEABODY’S SNAKE TATTOO WITH A SWITCHBLADE? What’s with F.P. Jones and Alice Cooper? Will someone expose the mayor and sheriff’s affair? What about Josie’s dad? Betty Cooper’s brother? Jughead’s mother and Jellybean? Will Toni Topaz get more screen time? To voice just several concerns.

Obviously, my satisfaction arises from something bookish. This expectation originated early in the first episode. At Pop’s, Betty, catching up with Archie after the summer, tells him about her internship. After organizing a book release party for Toni Morrison, Betty’s “literary hero” tells her, “Don’t rush this time, Betty. It goes by so fast at your age. One summer can change everything.” Unsurprisingly, Morrison, a treasured and decorated thinker and writer, keenly predicts the future. With her magic of tapping into ancient knowledge and being flawlessly present, she sets the tone for the entire show. 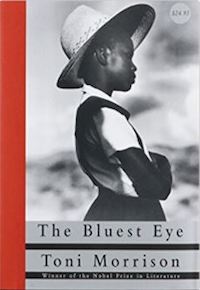 Since the first time I read The Bluest Eye, I understood Morrison’s words demand attention. She makes it so. Twenty-something me dog-eared page 15 for “We do not, cannot, know the meanings of all their words, for we are nine and ten years old. So we watch their faces, their hands, their feet, and listen for truth in timbre.” I remember a writing professor lecturing on the difficulties of writing interesting children, and here Morrison excels at precisely that in her first novel. While listening to Morrison’s latest, God Help the Child, on my work commute, I emphatically nodded my head to “No matter how hard we try to ignore it, the mind always knows truth and wants clarity.” 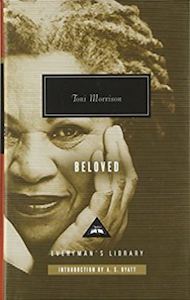 After Morrison’s advice to Betty morphs from omen to fact before our eyes, I—prone to daydreaming—don’t recall mention of Morrison, her work, or any writers of color until the last episode. Then: Jughead’s. Gift. To. Betty. A signed first edition of Beloved with an enclosed note thanking her for introducing him to her favorite writer. Sure, Varchie’s sex montage might be the topic of many conversations, but there’s a real intimacy in sharing books, showing someone your bent pages and marginal notes. Like Rory Gilmore and Jess Mariano in Gilmore Girls, books make me believe Bughead is destined to be together again and forever.

Let’s not forget Betty bought a vintage Underwood for the brooding Southside Serpent, who calls it the “typewriter of champions.” Their gifts to one another give their relationship real depth: off-screen conversations; heard, considered, and remembered thoughts. If love is when we let someone see us, then these gifts attest to their bond. In a show brimming with literary references (Romeo and Juliet and Nancy Drew), where you can guess the required reading by the books on set (The Metamorphosis), I’m hoping to see more writers of color, especially women, amplified by Riverdale’s ever-witty dialogue. And more Bughead.

The second season resumes Wednesday, January 17, at 8 pm on The CW.

Book Riot Comic's best posts, picked for you
Thank you for signing up! Keep an eye on your inbox.
By signing up you agree to our Terms of Service
#Comics/Graphic Novels#archie comics#riverdale#toni morrison