The 2017 VIDA Count hit the presses yesterday, and there are some causes for celebration, even while there is evidence that more work must be done. The VIDA Count measures the presence of women and non-binary individuals in publications across the literary landscape:  their main count covers 15 large-scale publications, and their count of the larger literary landscape covers 24 independent/small press literary journals and magazines. For purposes of consistency, the VIDA Count only considers work by women and non-binary individuals that was granted space in print; as VIDA points out, “It is too easy to confine women, gender minorities, and other marginalized writers to cost-effective web platforms, which frequently pay differently (or don’t pay at all), compared to their print counterparts.”

There are a few good points to highlight this year, but before we start, I want to highlight one of the figures VIDA gives us, which is that there was a 15% increase in the number of writers who completed the VIDA survey, up from 2016. Without writers completing these surveys and making the data available, the VIDA count wouldn’t really work, and it would be all too easy for publications to continue falling back on the old excuse that women and non-binary individuals don’t submit as much work as men.

I’ll be providing links to the websites for the magazines/journals that performed well in the Count so that you can buy some of their cool swag, subscribe to their content, or consider sending your own work there. Let’s show them some love and reward their work at parity. And away we go! 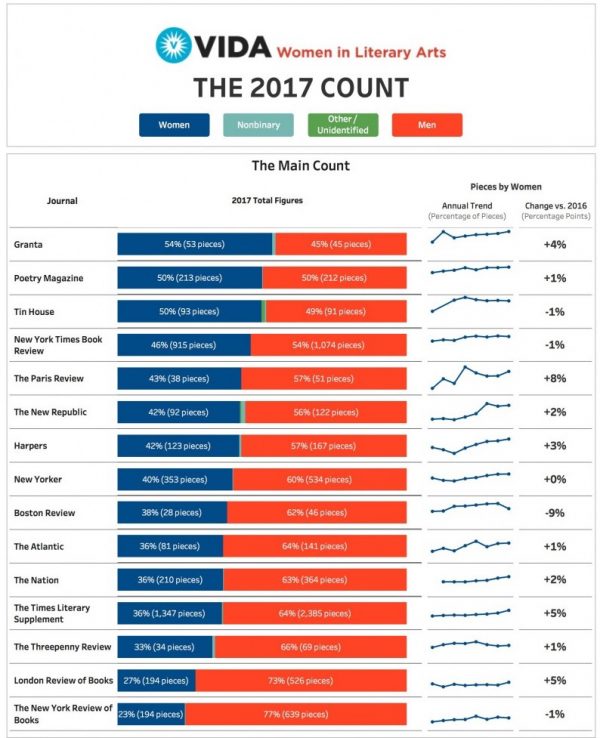 That said, 8 out of the 15 publications covered in the main count showed fewer than 40% women writers on their pages.

The New York Review of Books did well in 2016, coming in at 46.9% women writers. But in 2017? Not so much. Down to 23.3% women writers featured in 2017. They’ve done well before, they can do it again, but this shows that the goal of gender parity requires consistent effort, not a one-time party. 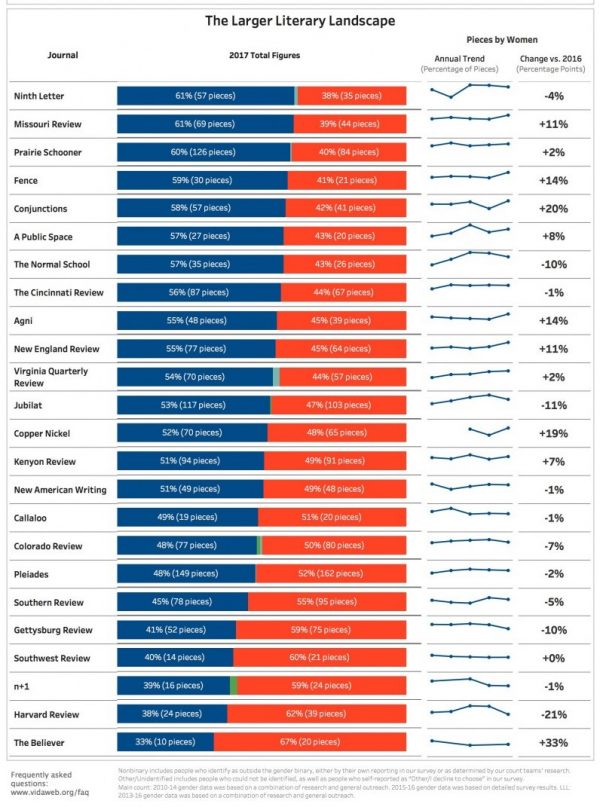 Now in the larger literary landscape, we do see more parity across the board. Small and independent presses have a greater rate of success in ensuring that equal attention is given to voices of women and gender non-binary individuals.

And the belle of the ball this year? The Missouri Review with 61.1% pieces published by women.

Let us reward them by buying all the back issues and all the swag.

In the larger literary landscape, 10 out of the 24 publications counted featured work by non-binary individuals. That’s up from 7 in 2016.

The Colorado Review, Ninth Letter, Pleiades, and Prairie Schooner all featured one piece written by a non-binary individual.

VIDA also does counts in other areas where privilege or bias could play a part in barring marginalized voices from publication:  age, academic access, race, disability, sexual identity, and transgender/non-binary are all counts that were conducted and tabulated. You can find those numbers at the end of the report.

So that’s 2017. If you’ll excuse me, I have to go subscribe to Missouri Review, and update my list of places to send my work.

More: Feminist Books to Read When Male Writers Turn Out to be Disappointing.