From the first page of Tara Westover’s Educated, I was gripped by her story and her writing. I eagerly wanted to know more about her survivalist Mormon family; their world was so different from mine that I couldn’t look away. [Warning: Spoilers from this point on!] 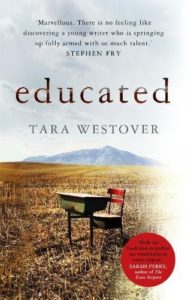 That’s how Westover gets you to keep reading at first; but soon enough you realise this isn’t a story of The Other at all, it’s a story about the importance of education in finding yourself in the world. Throughout the book, I was struck by how many things I have in common with Westover’s story, even if my reality growing up was radically far from hers.

Westover’s transformation is magnificent and so important. But most importantly, it’s relatable. When she reads Mary Wollstonecraft for the first time, and her world shifts, I was transported back to when I first read feminist texts and realised how my views and attitudes on gender were wrong. When she first learns about the Holocaust, which she had never heard of, I was transported back to when I realised for the first time that the history we are taught about slavery is sanitised. These were moments were Westover’s world shifts, where what she knew is considered ignorant and she looks at the world with new eyes. This is what education does.

And yet, throughout the whole story, I could not sense any shame, which I think would be a natural response to not knowing about the civil rights movement or the Holocaust. She is not ashamed of not having an education, and struggling to get one. Her world shifts so many times in her story, but the conclusion is that she is glad for those shifts, however painful they are.

These shifts are internal, but they affect the external. The knowledge gulf between Westover and her family is huge. As a PhD student myself, I sometimes feel like the gulf between my knowledge and people who aren’t as passionate about education as I am is huge too. To see that alienation written down was extremely powerful; the more I question the world we live in, the more distant I feel from the person I used to be.

Category ID: 479
Category ID: 867
True Story Newsletter
Sign up for True Story to receive nonfiction news, new releases, and must-read forthcoming titles.
Thank you for signing up! Keep an eye on your inbox.
By signing up you agree to our Terms of Service

And this is rarely ever talked about; education is a privilege, but it can also be extremely isolating, particularly at a time where academics and intellectuals are routinely dismissed for more simplistic takes we consume under the “fake news” umbrella. Westover’s father believes all kinds of conspiracy theories, but these theories are becoming more and more commonplace because of the internet. Educated is a memoir, but so much of it struck me as a cautionary tale against the alienation of critical thinking. Gene Westover is real, he will not accept any opposing truths to his own, and there are millions of him across the political spectrum.

Westover’s debut memoir is a triumph, and I am so thrilled to have devoured it. It depicted issues around education, religion, mental illness, and alienation in an empathetic way at a time where it would be easy to draw caricatures all around. Please read this book as soon as you can!