I do a lot of cooking. I also spend a lot of time thinking about superheroes. I’ve combined these disparate interests on a couple of occasions, including here on Book Riot when I spent some time considering which cookbooks each Avenger would contribute to the Avenger’s Tower library.

A meal I don’t often spend a lot of time on is breakfast: either I’m already at work when the kids get up or I’m trying to convince them that yes, we need to leave for the bus now, meaning quick and easy is the order most days. This morning, we were out of their standard fare and so the process dragged out. I did, however, manage to get them fed, dressed, brushed, and to the bus on time. Which got me thinking about all the parents out there who were doing the same thing. Superheroes one and all. 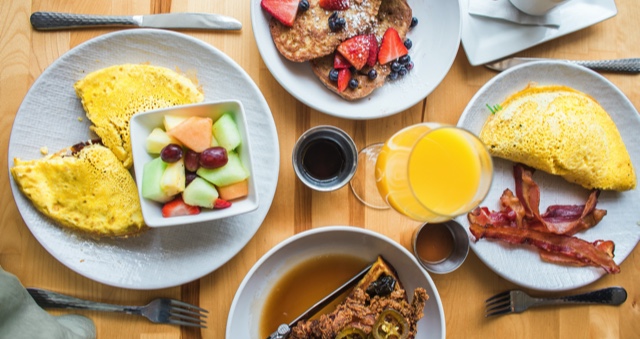 Which then got me thinking about what superheroes would have for breakfast. (I cannot take responsibility for where my brain goes. At a lecture hubs and I went to last week, Madeline Miller said that she doesn’t either, which makes me feel better about that whole business.)

FYI: I’m completely ignoring continuity and who may or may not currently be dead for the sake of comedy.

Here’s what I came up with:

I had to do all of them. I’m a completionist.

Bruce: As all of us who watched, and loved, the Batman: Brave and The Bold animated series know, Batman does not eat nachos unless his id, ego, and superego get zapped into three different bodies by a nuclear blast (I don’t make the “science”).

So what does the Caped Crusader have for breakfast? I’m seeing a protein bar/shake thing he grabs on the way out the door after an hour or two of sleep. Quick, efficient, and much to Alfred’s chagrin. No real enjoyment but it will keep him going.

Dick: Dick Grayson is probably one of the people who jumps out of bed with a smile on his face, ready to meet the day no matter how late he’s been out patrolling. He’s definitely a coffee drinker, probably with cream. Sugar depends on the day. Like Bruce, he spends a lot of his time in motion but he likes life and the world too much to eat cardboard so he probably goes for a muffin or a bagel. Maybe yogurt and granola if he has time.

Jason: Black coffee enhanced with the blood of his enemies and probably some of his friends.

Tim: Let’s get one thing straight. I am never going to call him Drake. Ever. I will not be taking questions.

The most intellectually gifted and most practical of the Robins, Tim has probably done research of the proper balance of protein to carbs to etc. for optimal function and makes sure he gets up early enough to sit and eat it at an optimal pace for digestion. He has exactly the right amount of caffeine to keep him sharp without the other side effects.

He has a secret vice though. Donuts maybe? Definitely something with absolutely no nutritional value. He’s judicious about indulging but sometimes, he just can’t help himself.

Damian: Despite his attitude and having been raised by a cult, Damian is still a teenager, which means Alfred is going to insist on something healthy like oatmeal or eggs, and he’s going to stand there and watch Damian eat it. Damian will do it because he has a secret soft spot for Alfred and appreciates the effort even though he’ll never tell the older man, so he makes sure he complains the whole time.

Being a teenager, however, and having missed out on a significant chunk of his childhood, Damian is still discovering the novelty of sugary cereal. He loves it. He’ll eat it until he explodes. Dick enables him by hiding boxes around the house for him to find.

Barbara: Barbara, with her mile a minute brain, usually forgets to eat breakfast because she wakes up in the middle of a thought and feels compelled to get to it before it gets buried under something else. She’ll do coffee or tea or an energy drink, whatever someone who knows her well enough to know she skipped her first meal of the day puts in front of her. Same on the food front though she is definitely a pancakes on the weekend kind of girl. The big, fluffy buttermilk ones. Especially if Dick is cooking.

Stephanie: As the only character in DC history to be both Robin and Batgirl, I think Steph deserves something extra special, especially since everyone from the editorial chain on down to Tim treated her like garbage. Let’s give her one of those absolutely perfect Liege waffles with whipped cream and strawberries.

Cassandra: The daughter of David Cain, a member of the League of Assassins, and Lady Shiva, Cass was raised to be the perfect body guard for Ra’s al Ghul. She was deprived of human contact and taught not to speak so her brain could focus on predictive body language assessment, this recalibration also led to difficulty with reading and writing. Sent on her first mission at age 8, she ran away from her father upon realizing the implications of murder. After ten years of homelessness, she was adopted by Barbara Gordon and welcomed into the Batfamily.

I just…want to make Cassandra something wonderful. Something that would put wonder in the heart and stomach of a child since she was so egregiously robbed of a childhood. Maybe a giant, fluffy slow cooker pancake or chocolate-chocolate chip muffins. Or my daughter’s favorite from our local crepe place, Cafe Moulin, the Super Belgium: bananas, strawberries, cookie spread, and chocolate sauce and their Nutella hot chocolate. 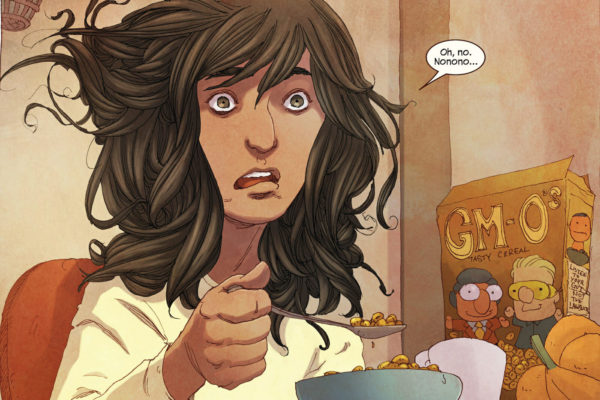 Kamala Khan (Ms. Marvel) is a Pakastani American teenager who lives in the family home and whose mother would certainly prepare family breakfast each day. And I have to imagine growing, shrining, and stretching would demand a fair number of calories. Running chronically late between school and superheroing, though, Kamala probably doesn’t always have time to sit down and eat. Luckily, aloo paratha fits nicely into a variety of containers and, even with chutney and butter, doesn’t require silverware. Cereal only leads to tragedy.

Monica was born in New Orleans, one of the best food destinations in the world. I imagine that despite traveling the universe and fighting aliens and monsters, she remains true to those roots—because who would want to trade cafe au lait out for anything else? Beignets are amazing, of course, but I see Monica at a counter seat at Camellia Grill (est. 1946) with a her coffee and a slice of heated chocolate-pecan pie after a rough mission. 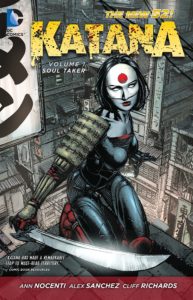 Hailing from Japan and wielding a mystical sword that devours souls, Tatsu Yamashiro has escaped a tragic past to become a superhero. I don’t see her as someone who has a ton of time to cook, but that doesn’t mean she doesn’t need to eat and reaping souls definitely calls for comfort food from home: steamed rice, miso soup, a protein (often fish), and side dishes like tsukemono, Natto, kobachi, or salad. Nothing too heavy and nothing fried; just old friends from far away.

Wakanda has existed in various locations throughout its history though it’s roaming has typically been confined to Sub-Saharan Africa. Most recently, Ta-Nehisi Coates placed it near Lake Victoria, which suggests a location similar to the eastern part of the Democratic Republic of the Congo. Happiest in her lab, Shuri no doubt has to be summoned to the table in the morning, but she secretly enjoys giving T’Challa crap before he’s fully awake. No doubt anxious to get back to work, Shuri might go for chai and mandazi, a cardamom donut popular in the eastern part of the continent.

In all of her incarnations, Misty has been a Harlem girl. Whether a cop or a bounty hunter, she’s a busy lady and I can see her enjoying the process of cooking as something precise and predictable when she has time. When she doesn’t though, sick of grab and go, she might head to Tsion Cafe for Tsion Eggs or FirFir. I am 100% sure she can take the heat. 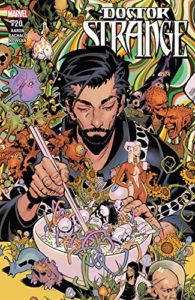 In Jason Aaron and Chris Bachalo’s Doctor Strange run, we learned that there are consequences to drawing energy from the Dark Dimension. One of them is being unable to eat anything remotely resembling food and being forced to subsist on demon guts. And eyeballs. Brains. Sentient, cursed tumors…Wong tries to help out by making it palatable but yeah…no.

The butt of last night’s cigarette and whatever whiskey is left in the bottle.

Heroes. They’re just like you and me in that they need to eat to survive. Sometimes it’s function over form and sometimes for the pleasure of taking a moment after a mission to savor home. Most of us don’t get to eat 156 tacos at 7 am like the Flash but hey, would you really want to?

Yes. The answer is yes. I would. Tacos forever.