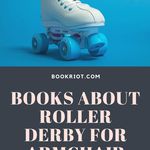 For me, a small time teenager in tiny Ireland, it started with Whip It!, the Drew Barrymore film which sent a spotlight into my soul. The idea that punky attitude and independence could exist in my near future was a rhapsody for me. But Ireland was still small and at the time there were no leagues that I knew of, and I wasn’t brave enough to start one. 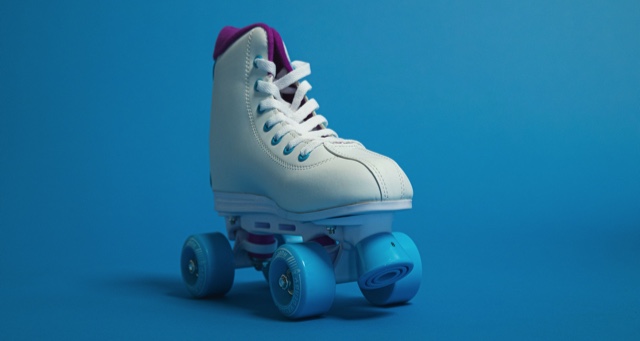 I did read Whip It!’s origin story by Shauna Cross, though, embracing the young adult vibe and the pushback against traditional ‘feminine’ values as Bliss Cavendar does throughout the story while she works out who she is and wants to be. It’s a lovely read, chock full of women who have agency and autonomy, helping each other to work things out and, even in their competitions, expressing fierce admiration for one another. It’s the sort of girl power that I could easily get behind.

When I moved to London, I attended some bouts and am still a loyal follower of lots of derby accounts on social media. Every few months I consider joining a league and commencing training, but every time I push it back again, convinced that I’ll make a fool of myself. I’ve even read Roller Derby 101: The Fresh Meat Training Manual by Punchy O’Guts a few times – it’s a great little instruction manual but in true armchair athlete style, I have yet to commit to the attempt in real life. 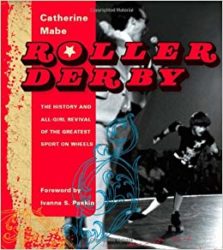 The sport isn’t a new phenomenon and though it grows bigger with each passing year, its history stretches back to the 1930s, when Leo Seltzer commenced his roller derby marathon, in which people on skates raced another in a desperate attempt to come first in a gruelling endurance event which covered 3000 miles in laps around a banked track. This origin is told in Roller Derby by Catherine Mabe, which details both history and revival of derby as a sport, interspersed with stories about athletes, names, art and even injuries.

Roller derby has been through several revivals but the most well known is the reemergence of derby in Texas in the early 2000s. As more and more women lined up to play, demands for materials grew and just as I was departing university I found a copy of Roller Derby Athlete by Ellen Parnavelas, which gives a fun and intense look into the world of derby, from rules and strategies to training and nutrition. In a world where much material about fitness is aimed at men and ‘the average male body’, the body positivity and commitment to sections on women’s fitness are welcome. 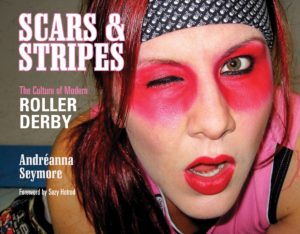 Of course, sports photography is a beautiful way to see inside the mess of competitive activity. Derby has two particularly great resources – Scars & Stripes by Andreanna Seymore is my favourite. Seymore is herself a skater and arrived to the sport in the late 2000s. Her photos are loaded with action, depicting emotional moments and action packed moments. This book is lovely precisely because it’s inclusive, noting the contributions of male teams, coed teams and younger leagues. The trend of ‘girls’ has come under consideration in the past few years, and many derby leagues have become more inclusive, welcoming trans and nonbinary people to the fold. In Rollergirls by Melissa Joulwan, photographs depict some famous stars of the modern day scene in black and white images. The sense of humour in the book is great and it’s a fun glimpse inside the chaos.

Unfortunately, roller derby remains in reemergence and as with many American sports, its history is dominantly white and the contributions and thoughts of indigenous groups and people of colour haven’t yet risen to the fore. Given the scarcity of publications about roller derby right now (relative to say, soccer), I’m hopeful for diversity in the voices that emerge from this revolution.