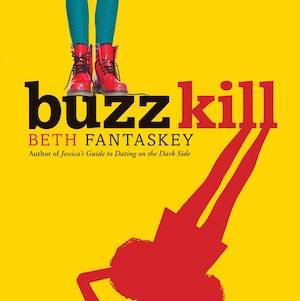 This giveaway is sponsored by Buzz Kill by Beth Fantaskey.

In this fresh and funny teen mystery, seventeen-year-old Millie joins forces with her classmate, gorgeous but mysterious Chase Albright, to try to find out who murdered Coach Killdare.

Putting the dead in deadline
To Bee or not to Bee? When the widely disliked Honeywell Stingers football coach is found murdered, 17-year-old Millie is determined to investigate. She is chasing a lead for the school newspaper – and looking to clear her father, the assistant coach, and prime suspect.

Millie’s partner is gorgeous, smart-and keeping secrets
Millie joins forces with her mysterious classmate Chase who seems to want to help her even while covering up secrets of his own.

She’s starting to get a reputation…without any of the benefits.


Category ID: 1786
Category ID: 476
Check Your Shelf Newsletter
Sign up to receive Check Your Shelf, the Librarian's One-Stop Shop For News, Book Lists, And More.
Thank you for signing up! Keep an eye on your inbox.
By signing up you agree to our terms of use
Drama-and bodies-pile up around Millie and she chases clues, snuggles Baxter the so-ugly-he’s-adorable bassett hound, and storms out of the world’s most awkward school dance/memorial mash-up. At least she gets to eat a lot of pie.

For this giveaway, we asked you to weigh in on your favorite teen mysteries. It’s no surprise there’s a mix of classic teen sleuths, long-running series, and new titles. There’s definitely something for every kind of mystery reader here, from those who want a good whodunit to those looking for a fast-paced heist.

A few of the titles that popped up multiple times:

The Naturals by Jennifer Lynn Barnes

Nancy Drew series by Carolyn Keene (by far your favorite!)

You also shared these titles as favorites:

Also Known As by Robin Benway

What I Saw And How I Lied by Judy Blundell

The Diviners by Libba Bray

The Face on the Milk Carton by Caroline B. Cooney

Harriet the Spy by Lois Fitzhugh

The Clockwork Scarab by Colleen Gleason

No One Else Can Have You by Kathleen Hale

The Girl Who Was Supposed to Die by April Henry

All Unquiet Things by Anna Jarzab

The Girl is Murder by Kathryn Miller Haines

Confessions of a Murder Suspect by James Patterson

The Westing Game by Ellen Raskin

The Lying Game by Sara Shepard

I Am The Messenger by Marcus Zusak