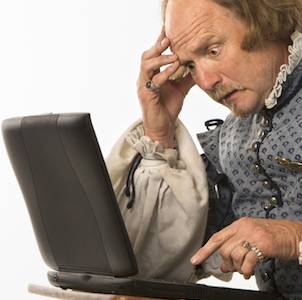 This is a guest post from Dennis Abrams. Dennis is a contributing editor for Publishing Perspectives, where he blogs daily on publishing news, with an emphasis on international and children’s publishing and media. He’s also a restaurant critic, literary blogger, and the author of The Play’s The Thing, a complete YA guide to the plays of William Shakespeare published in February by Pentian, as well as more than 30 YA biographies and histories for Chelsea House publishers, on topics ranging from Hillary Rodham Clinton to Xerxes, Angelina Jolie to George Washington Carver, and Eminem to Georgia O’Keefe and the Treaty of Nanking.

He currently lives in Houston, Texas with his dog, Junie B., and cats, Alexie and Fez. His next project is an “alternative” reading list for young adults on their way to college…or life, with a working title, “150 Books You Probably Should Have Read in High School…But Didn’t.” Follow him on Twitter @DennisAbrams2.

This year marks the 400th anniversary of the death of William Shakespeare – which means that now is an appropriate  time for you to read (or re-read) one of the plays that made his name virtually synonymous with the word “genius.”

Sure you can read one of the popular plays (Macbeth, Romeo & Juliet, King Lear, Midsummer Night’s Dream, As You Like It), or you can delve into some of the less well-known plays that I think have been underrated by audiences for centuries.

I’m here to help.  As the author of the new book The Play’s The Thing, a complete guide to all of the plays, I have done the reading and research, so you don’t have to.  Here is my list of the five most underrated of Shakespeare’s plays. The ones that don’t get nearly the attention they deserve; the ones that earn you serious literary bonus points for having read them. 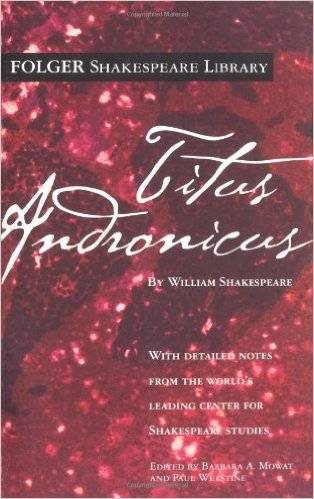 Are you a fan of horror films, preferably the bloodier the better? Do you have the darkest of dark sense of humor? If that’s the case, this is the play for you. It’s got mutilation (we’re talking hands and tongue lopped off). It’s got deaths and more deaths, including young men murdered, baked into a pie and served as dinner to their unknowing mother.

Think Hostel perhaps, or Day of the Dead – films that are so over-the-top bloody and gory that horrified laughter is really the only possible response. That’s the tragic yet over the top comic world of Titus.

As filmmaker Mel Brooks once said, “Tragedy is when I cut my finger. Comedy is when you walk into an open sewer and die.”  There are a whole lot of open sewers being walked into in Titus Andronicus. And for many readers, because the scenes are so balanced between tragedy and the open sewer, that uncertainty as to when to be horrified and when to laugh (if only uneasily), that makes viewing or reading the play a most memorable experience. 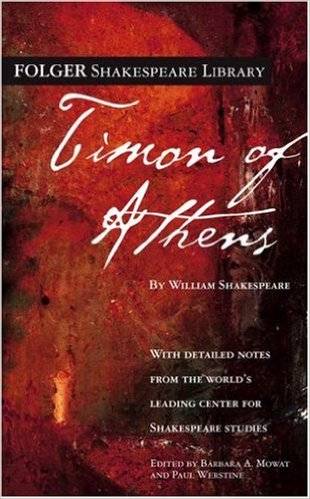 Do you know who your true friends are as opposed to those who are only with you because of what you can give them or do for them?

Regardless of your answer, this play’s for you.

It’s a play about a wealthy man living beyond his means. It’s about credit, influence, loans, and gifts. It’s about the power of money and what it does to people, both those who give and those who receive. It’s about whether people like and appreciate you for who you are, or only for what you can do for them.

It’s Timon of Athens, and of all of Shakespeare’s plays, it might be the one most relevant to the way we live now, to our concerns about money – who has it, who doesn’t, and what it does and doesn’t do.

The story is as old as money itself: the fable of the big-spending man who uses, and then loses, all of his wealth. And with that loss, he loses his wits, his mind, and everything he owns. And is.

It’s a play obsessed with wealth and power, with sickness and disease.

It’s also, truth be told, far from a perfect play – it’s deeply flawed structurally, the last scenes just sort of meander off, and there’s a feeling that the play was never quite completed to Shakespeare’s satisfaction.

But even so, there’s something in this play that strikes a deep nerve. Money, credit, the fear that our friends are using us and don’t love us for us…these are themes as relevant now as they were when the play was written. Ambition and the urge for more and more money is with us now more than ever, as is the realization that most eventually come to – that gold, ultimately, is worthless.

“I cannot eat it,” said Timon. And that’s a lesson that never goes out of style. 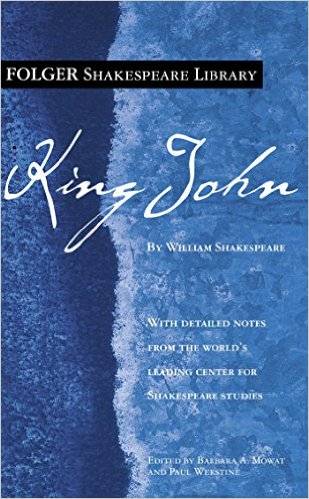 Think of The Life and Death of King John as the chronicle play that got away. Set in an even earlier period of British history than the two tetralogies (Richard II, Henry IV 1 & 2 and Henry V; Henry VI all three parts and Richard III), it seems to have slipped through the cracks when it comes to being performed or even much talked about. And yet, in King John, politics are depicted in startlingly modern terms – cynical, hard-edged, and ultimately destructive. Sound familiar?

The plot moves quickly and easily across the defining events of John’s reign (although surprisingly, it completely ignores the one thing that he remains known for – the signing of the Magna Carta – and if you want to know about THAT…there’s Google), while also taking constant risks with the material, showing us the chaotic and messy workings of reality in unsparing detail.

So even though the play takes place during the late 12th and early 13th centuries, from our 21st century perspective, King John seems to be one of Shakespeare’s most modern works, as well as a bold experiment in how to make drama out of history.

It’s darkly cynical when it comes to politics and religion. It’s a strikingly modern take on the absurdity of war. And in the character of Faulconbridge the Bastard, a huge step forward in Shakespeare’s growth as a writer.

But what I find most appealing (and totally modern) about the play is its downright cynicism – its seeming disbelief in the ability of politicians and religious figures to act honorably, instead of just serving their own self-interest. 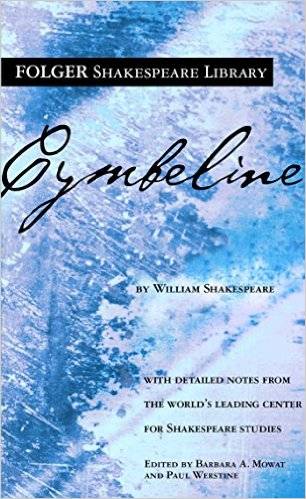 At the end of his writing career, Shakespeare wrote four plays often referred to as “romances” – Pericles, The Winter’s Tale, The Tempest and Cymbeline.

They’re not romances in the romance/love story sense. They’re tales of journeys taken, of loss and recovery, a mix of realism and magic. They’re fairy tales writ large. Not quite plausible, but utterly believable.

And Cymbeline is a doozy. Consider this.

It has plot elements later seen in Disney Classics Snow White (evil stepmother plotting to kill her stepdaughter with poison), Sleeping Beauty (beautiful princess seems dead but she’s only sleeping), and even Mulan (dead ancestors pray to the gods for the safety of their child).

And even among Shakespeare’s romances, Cymbeline is known for its extreme…implausibility.

You’ve got a beautiful cross-dressing princess. You’ve got a wicked stepmother who is so wicked she doesn’t even have a name – she’s just the Queen. You’ve got deaths, both fake AND real. You’re got an invasion by the Romans. The God Jupiter makes a special guest appearance, along with a large number of ghosts.

And although it’s ridiculous in almost every way one can imagine (and then some), it’s also ridiculously entertaining. And touching. And near sublime. Which makes for an odd, but altogether winning combination.

Plus it contains one of my favorite lyrics in all of Shakespeare. A sample:

Nor the furious winter’s rages,

Thou thy worldly task hast done,

Golden lads and girls all must,

As chimney-sweepers, come to dust.

By challenging himself to take elements from his previous plays, mix in the idea of the “romance,” throw in some fairytales, Shakespeare, in Cymbeline, came up with something altogether extraordinary.

“ Cymbeline, it seems to me, is the most extraordinary play that Shakespeare ever wrote. How does he do it? Staggering!” 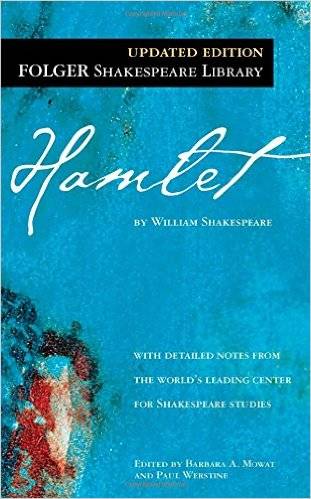 Yes – this is a list of the most underrated plays by Shakespeare. And while Hamlet is, obviously most highly rated, at the same time, I’d argue, it’s underrated and underappreciated for the extraordinary work of experimental art that it is.

It’s a play about death. And life. And theater. And murder. And ghosts. And love. And sex.

It’s a thriller. And a mystery.

It’s a play about life. About growing up and coming of age.

It’s a play about coping with a death in the family.

And more death. Lots of death. At the end of the play, the stage is covered with dead bodies.

While Hamlet speaks to people of all ages and all across all cultures and times, he is also, very specifically a young man in the middle of a personal crisis. His father has died, he doesn’t like his new dad, he doesn’t quite trust his girlfriend, and so what does he do? He mopes around the castle wearing black, talking to himself (although without the ability to post his thoughts on YouTube) about life and what it all means.

Or to put it another way, while Hamlet is a prince whose uncle has murdered his father and taken his throne (not a problem most of us can relate to), he is also a university student unable to come to terms with the loss of his father. And that is something anyone can relate to.

So one way of looking at Hamlet, then, is to see him as the first “modern” man in Western literature. Or even, although this might be stretching it a bit, as the first modern teenager.

But that’s just one way of looking at a play which is not unlike a hall of mirrors, and open to as many interpretations as there are readers.

When you read Hamlet, consider this from Logan Pearsoll Smith’s On Reading Shakespeare:

“The people in the work of other playwrights or novelists, however living, are yet perspicuous beings: we see their motives and understand them in a way we seldom or never understand people in real life. Real people will now and then surprise, and even astonish us with what they say and do; we can never quite predict their future actions; but this action of inexplicability, which at the same time invites and eludes analysis, Shakespeare has given to characters like Falstaff, and Hamlet, and Cleopatra.

“As Dr. Bradley finely says, ‘they are inexhaustible. You feel that, if they were alive and you spent your whole life with them…they would continue every day to surprise, perplex, and delight you…’ Our sense of their reality is heightened by our inability to see through them and find any formula to explain them. Of all these characters the most baffling is Hamlet; and the fact that we cannot explain him, that he seems unable to explain himself, is perhaps what makes this imaginary being seem in a way more real than any real person who ever lived.”

And it is that aspect of Hamlet, the need to hear more and know more about the young man named Hamlet, to learn what we know he has to teach us, is what brings us back to the play time and time again.

If you’re only going to read one play by Shakespeare in your life to celebrate this year of Shakespeare, this is the one.