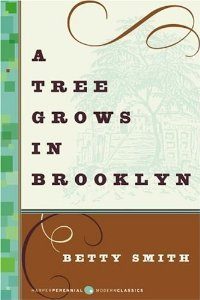 Betty Smith’s semi-autobiographical coming-of-age novel, A Tree Grows in Brooklyn, has been popular since its initial publication in 1943. Its protagonist, Francie Nolan, is a girl growing up in a tenement in Williamsburg, Brooklyn, in the early 20th century. The novel provides background on Francie’s family history while showing her developing voice as a writer. Although my life and family are very different from Francie’s, her immigrant grandparents’ belief in the importance of education will always remind me of my own grandparents. This classic book is memorable and quotable on broad, timeless topics like literacy, gender, family, and love.

Quotes on Reading and Writing

She read the words over aloud. They sounded like words that came in a can; the freshness was cooked out of them. She closed the book and put it away.

The world was hers for the reading.

It doesn’t take long to write things of which you know nothing. When you write of actual things, it takes longer, because you have to live them first.

A lie was something you told because you were mean or a coward.

A story was something you made up out of something that might have happened. Only you didn’t tell it like it was, you told it like you thought it should have been.

The secret lies in the reading and the writing. You are able to read. Every day you must read one page from some good book to your child. Every day this must be until the child learns to read. Then she must read every day, I know this is the secret.

Francie was ten years old when she first found an outlet in writing. What she wrote was of little consequence. What was important was that the attempt to write stories kept her straight on the dividing line between truth and fiction. If she had not found this outlet in writing, she might have grown up to be a tremendous liar.

Quotes on Love, Family, and Happiness

Look at everything always as though you were seeing it either for the first or last time: Thus is your time on earth filled with glory.

She had become accustomed to being lonely. She was used to walking alone and to being considered “different.” She did not suffer too much.

People always think that happiness is a faraway thing … something complicated and hard to get. Yet, what little things can make it up; a place of shelter when it rains—a cup of strong hot coffee when you’re blue; for a man, a cigarette for contentment; a book to read when you’re alone—just to be with someone you love. Those things make happiness.

She was made up of more, too. She was the books she read in the library. She was the flower in the brown bowl. Part of her life was made from the tree growing rankly in the yard. She was the bitter quarrels she had with her brother whom she loved dearly.

And that’s where the whole trouble is. We’re too much alike to understand each other because we don’t even understand our own selves.

Francie wished adults would stop telling her that. Already the load of thanks in the future was weighing her down. She figured she’d have to spend the best years of her womanhood hunting up people to tell them that they were right and to thank them.

I know that’s what people say—you’ll get over it. I’d say it, too. But I know it’s not true. Oh, you’ll be happy again, never fear. But you won’t forget. Every time you fall in love it will be because something in the man reminds you of him.

Those were the Rommely women: Many, the mother, Evy, Sissy, and Katie, her daughters, and Francie, who would grow up to be a Rommely woman even though her name was Nolan.