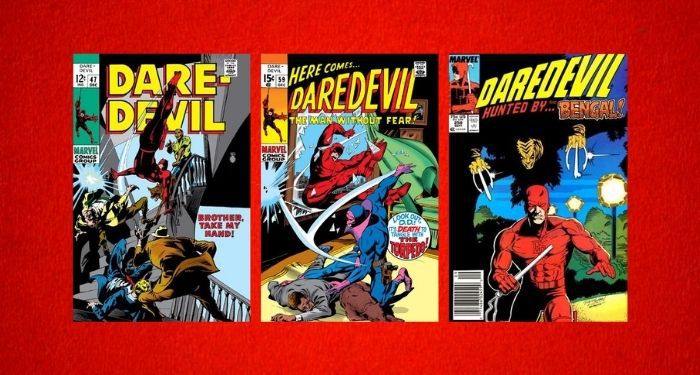 Even superheroes need friends! And, just like friendships in real life, some of those relationships last a lifetime and others fade away as you pursue your own destinies. In this series, I’ll be spotlighting some of the side characters who have been left by the wayside.

Willie Lincoln is very much a serve-your-country kind of person. He started out by joining the NYPD, where he proved so good at his job that a mobster framed him for taking bribes just to get him out of the way. Willie then joined the Army. By the time we meet him in Daredevil #47, he is slowly going blind after saving his buddies from a grenade attack. (There’s more to the story than that, but we’ll get to it later.) The last thing he ever sees is his favorite superhero, Daredevil, who has come to Vietnam to perform for the troops.

You may already be thinking that Willie Lincoln is similar to Eddie March, a previous Absent Friend (link at the bottom!). Eddie, too, is a disabled Black man who admires a superhero (in Eddie’s case, Iron Man) whose world he soon gets caught up in. They were both created in the late ’60s, though Willie came first and was created by Stan “the Man” Lee himself. George Tuska and Archie Goodwin, Eddie’s creators, may well have been influenced by Lee’s work, though Willie and Eddie have as many differences as they do similarities.

One other similarity: Willie was destined to quickly vanish into the ether rather than get elevated to “recurring character” status.

The last of Willie’s sight goes in the middle of the performance, and despite his earlier calm resignation to going blind, he understandably panics. Daredevil gives him an unsuccessful pep talk and then thinks to himself how stupid war is. Months later, back stateside, Willie hires Matt Murdock, whom Daredevil name-dropped during their conversation, to clear his name with the NYPD, which he does.

Willie could easily have disappeared at this point, never to return. Instead, he popped up two issues later. We learn that he’s gotten a job, as Willie puts it because this is the late ’60s, as “a liaison between the cops and the soul brothers” with the urban corps. Or maybe he rejoins the police force as an investigator. Different comics say different things. I’m starting to think Marvel does not care about this character.

Either way, Willie gets some dirt on Crime-Wave, a rather pathetic wannabe crime lord. In response, Crime-Lord puts out a hit on Willie, and Willie and Daredevil end up saving each other from the equally pathetic hitman Crime-Wave hires.

This was apparently so traumatic that Willie Lincoln would not appear again until Daredevil #258, nearly 20 years later. Speaking of trauma, we see that Willie still suffers from PTSD related to his military service. His guilt stems from a particular incident that occurred the day he was blinded. As Willie was being evacuated, his fellow soldiers massacred an entire village. The only survivor was a little boy who tried to get into the helicopter and was ruthlessly kicked to the ground by some of the other soldiers.

(Fun fact: The helicopter pilot who evacs Willie is named Rhodey. It’s never stated explicitly, but he is likely James Rhodes, the future War Machine, who served as a pilot in Vietnam. I don’t know if this ever came up in an Iron Man or War Machine comic, but I for one would like to know what he remembers about this whole “let’s murder a child” incident.)

The boy survives the fall and becomes a Punisher-like figure named the Bengal, bent on murdering the group of soldiers responsible for the massacre. That includes Willie, though he was busy being grievously injured at the time. When Daredevil reveals that he has been targeting an innocent man, Bengal jumps out a window out of guilt.

This comic is basically an excuse for Marvel to once again reiterate that war (especially the Vietnam War) is bad, but with a far darker tone than Willie’s debut. It also, unlike ’60s comics, can acknowledge that American soldiers were both victims and perpetrators of violence — and most of them got to go home and live their lives without suffering any consequences for their actions.

It also makes me wonder about Willie a little. While he didn’t kill any civilians that we know of, he didn’t make any effort to stop his fellow soldiers from threatening and harassing the terrified villagers, either. He’s not happy about it, certainly: his narration presciently indicates he wants to “be blind to everything around me” while this is going on. But saying he doesn’t want to see horrors occur doesn’t mean he’s about to risk his neck or his career to stop them from occurring. If no one had thrown that grenade, would Willie have stood by and let the massacre happen? Had he stood by and tolerated such behavior before?

All unanswerable questions. Willie’s last appearance to date was in The Marvels #1 in 2021, and that was just a quickie cameo of him watching Daredevil’s USO show.

I think Marvel missed a great opportunity with this character. Willie Lincoln debuted during a really hectic time in Daredevil’s life. He faked Matt Murdock’s death and then came back. He told his love interest about his secret identity and proposed marriage, only to see it all backfire. His former law partner became district attorney and recruited Matt as an assistant after his resurrection. With all this upheaval, it would have been easy enough to slip Willie in as a part of his new life. His liaison/cop position would have been the perfect excuse: whenever Willie met someone in need of legal services or uncovered illegal activity, he could pass the leads to Matt Murdock. It would have been great to get another disabled person into the cast, especially one who couldn’t rely on radiation-induced superpowers. The fact that his service dog Nugget is a very good boy would have been a bonus.

Instead, Willie became inextricably linked with the Vietnam era, which probably explains his lack of recent appearances. Unlike Eddie March, who became a minor pawn in Iron Man’s story, Willie became a mouthpiece for antiwar messages. Still, that’s no reason he can’t come back. America has been involved in plenty of wars since Vietnam, and they were all at least as terrible as that one. Since Marvel apparently has nothing better for Willie Lincoln to do than demonstrate the horrors of combat, some updated antiwar messages wouldn’t go amiss.