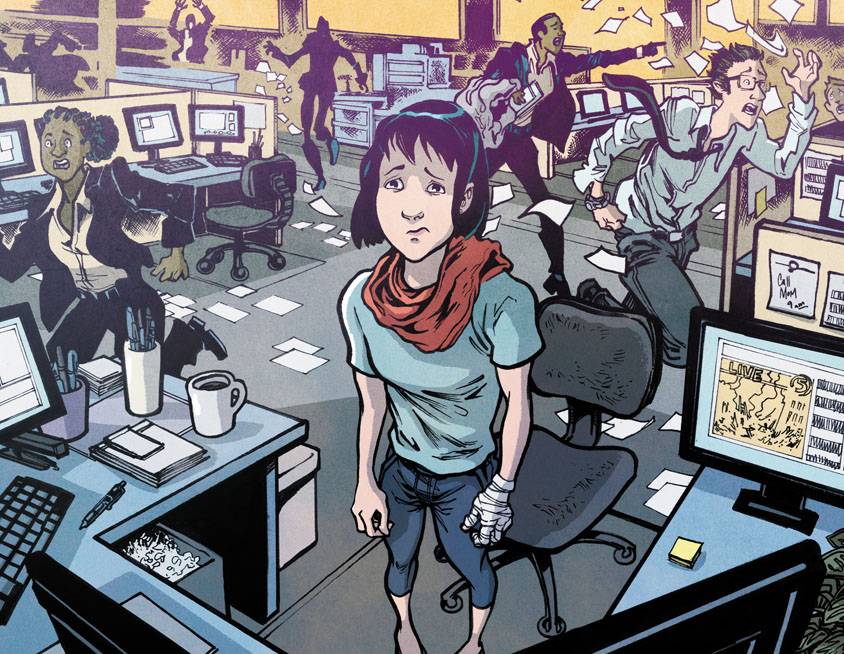 Adventures of a Comic Book Newbie is the place where you’ll find a discussion of the fundamental elements of comics and comic culture. If you’re new to comics (or perhaps a seasoned vet eager to get back to the basics), this column will serve as a guide on where to start and what you need to know to get the most out of your comics experience.

Panelteer Melody: I read your post on the top-selling books at Fantom this month, and I was intrigued by your point about pinch-hitter artists filling in for certain series. Why do comics series use substitute artists?

Panelteer Jake: Substitute artists are mainly used by Marvel and DC to keep the ball rolling 12 months a year with a full-length 32-page comic every single month (or more)–a pace that’s virtually impossible for a single artist to keep up.

Most creator-owned books, like the ones you’ll find at Image, don’t do this. Take Saga for example: rather than pump out an issue every month for the whole year, they’ll release a six-issue story arc once a month for six months, and then take a few months off so Fiona Staples can recharge her batteries before beginning the next arc.

DC and Marvel, on the other hand, want readers coming back to their local comic shop to put down cold hard cash every month (or week!). Many superhero comic readers are invested in a series for the iconic characters rather than for a specific artist, so they’re more likely to keep buying a book regardless of who’s drawing it.

Is this planned ahead of time, or does it happen when the main artist needs a pinch-hitter to make a deadline?

A little bit of both. To keep your baseball metaphor going: the Big Two like to keep a farm system of minor league talent, and fill-in issues are often drawn by up-and-coming artists as a sort of tryout before they hit the major leagues.

Comics are drawn months before they’re released, and common practice at Marvel and DC is to hire substitute artists to draw filler issues that can be released at any time, a stockpile that can bridge any gaps when the primary creative team misses a deadline or can’t put out a book for one reason or another.

So those issues are sort of outside of the main arcs?

As we’ve seen recently with Silk, Spider-Gwen, Batgirl, Black Canary, and Ms. Marvel, some of the fill-in issues are planned ahead of time as parts of the story, but sometimes they act as self-contained stories (which is why they can be released whenever). Ms. Marvel is interesting because it’s been juggling two main artists, Adrian Alphona and Takeshi Miyazawa, for its entire run. One tends to draw more of the action-focused issues and the other draws the more dialogue-heavy issues, playing to each’s strengths. But even with Ms. Marvel, there’ve been some filler issues with other artists as well.

I hadn’t noticed that difference between Alphona and Miyazawa, but you’re totally right! That’s a great example of how the artists can collaborate and add different perspectives. But in other books, it can be a bit jarring to switch from one style to another so frequently.

Batgirl has struggled a bit with fill-in artists during its most recent iteration, and a big reason is that Babs Tarr (who is fantastic!) comes from an illustration background rather than a sequential art background, so she’s taken longer than some of DC’s other artists to finish issues. You’ll notice on the credits page of Batgirl that co-writer Cameron Stewart (who’s an artist in his own right) does the plotting and layouts sometimes to help her along, and there have even been issues where Babs draws the characters but another artist draws the backgrounds.

If you look at the way the manga industry works in Japan, they go even harder in this direction. Long-running manga series will be credited with one main writer/artist for the whole run, but they’re able to do it because they often have a half-dozen assistants drawing backgrounds and things like that. Popular manga like One Piece and Attack on Titan all come out weekly, so it’s even more of a grind than monthly superhero comics!

Yikes! So how do they stay consistent? Do they all collaborate together, or keep a style sheet, or do they kinda take the idea and run with it?

When it comes to superhero comics, there’s always a style sheet. A lot of what editors do at DC and Marvel is make sure that characters are wearing the correct costumes, that it matches with existing canon, etc.

In regards to these great lady-centric books that have all had fill-ins lately, I think a lot of it is growing pains. Marvel and DC are taking chances on more non-traditional artists like Babs Tarr on Batgirl, Annie Wu on Black Canary, Robbi Rodriguez on Spider-Gwen, and Stacey Lee on Silk, all of whom have a distinct style that appeals to a different audience than your rank-and-file superhero comic, but since they’re newer to the industry, they don’t necessarily handle that grind as well as more experienced (not necessarily better) artists do.

I’m glad Marvel and DC are taking a chance on these ladies–they are some of my very favorite creators out there. Should I worry about the future of their books, though?

DC is about to reboot all their books later this year (even though they refuse to call it a reboot) with Rebirth, and it’s still unclear whether existing series will start over with all-new creative teams, or if they’ll pull an “All-New All-Different” and just renumber books with the same creative teams. So I dunno how that’ll affect the DC books.

Aren’t some of them going to double-ship (release two issues a month)? Seems like that will add even more pressure on the artists.

From what I can tell, the only books that’ll be double-shipping for sure are Batman, Superman, and Wonder Woman. We already know Scott Snyder is jumping ship from Batman to write Detective Comics to maintain his regular monthly pace, so that’s at least one book keeping a monthly schedule–I bet it’ll be a bit of both.

Marvel’s toyed around with double-shipping for a long time, too. Amazing Spider-Man has double-shipped on and off for years, and right now they’re doing it frequently with their marquee books like Invincible Iron Man, Avengers, and the Star Wars books.

Double-shipping is always for short-term gain. It burns out creative teams and sacrifices quality across the board. So yes, if Batgirl or Ms. Marvel begin to double-ship, I would be worried for the future of the series.

Hopefully the head honchos will understand the importance of these series in the long-term, then.

At the end of the day, it’s all about sales numbers. Batgirl sells well enough that I don’t think we have to worry about it, but Black Canary has already been confirmed as cancelled, and Silk is right on the edge–in that case, it got overshadowed by Spider-Gwen, which is a fun femme-centric book in its own right!

I doubt many of the books we’ve been talking about will double-ship, because the strength of most of these newer-audience series is in the trade paperback sales, not the single issue sales. Unbeatable Squirrel Girl has incredibly weak single issue numbers, but its trades outsell a bunch of other Marvel books, so it’s safe for the foreseeable future.

Ah, the differences in how sales numbers of single issues versus trades are counted–that is a whole ‘nother issue! (GET IT?!)

The industry is moving more and more towards trades and graphic novels, spearheaded by Image–they put out TPs as soon as all the issues are out, and most of their vol. 1s are only $9.99. Marvel and DC are way behind in that department, but you can see they’re beginning to catch on; they’ve been putting out more lower-priced trades lately, and I think Patsy Walker, A.K.A. Hellcat!’s first volume will hit stands pretty shortly after the first arc is over.

Awesome! So maybe in the future we’ll see more of the Image approach to art: release six issues, wait for the trade to come out while you give the artist a break, and then keep on.

I want to say yes, but I dunno–at the ComicsPro retailer summit in Portland last month, Image head honcho Eric Stephenson gave a big keynote speech that in part blamed readers for trade-waiting, which seemed strange to me, given the huge success his company is having due to trades.

His point seemed to be that while trades are great for the long term, many artists and writers still rely on those monthly paychecks from the single issues to pay their rent before the TPs can carry the weight of the series.

Yeah, but if artists need to step aside for a month because of the unrelenting pace, that doesn’t really help pay their bills either, does it?

It’s tough. Unless you’re one of the very very very lucky ones, you’re never going to get rich doing comics.

When we were talking about new artists handling the monthly grind of superhero comics earlier, it reminded me of Greg Land. Everyone loves to make fun of Greg Land as this awful artist who takes photo reference for his characters from porn–you might know him as the original artist of Spider-Woman before they kicked him off at issue #5 and redesigned her with a new costume and art style.

But Greg Land keeps getting work. Right now he’s the main artist on Uncanny X-Men, one of Marvel’s biggest books. Why does he keep getting hired? I reckon it’s because he turns in his work on time, every single month, forever.

Comics are an art, but they’re a craft, too, especially when it comes to superhero comics. The 12-month grind favors the craftsmen over the artists, and that’s where we get this big dichotomy in modern mainstream comics.

The more you know. Thank you! This has been fascinating AND fun.

Thanks, Melody! We should do this again sometime.