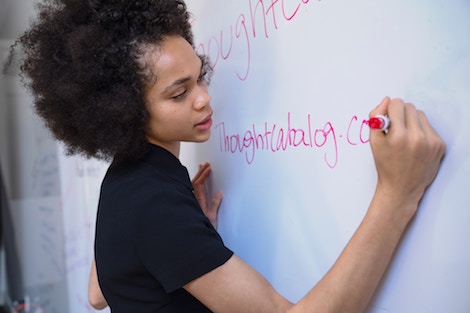 A few weeks ago I got a chance to go to a full weekend of events at the Toronto International Festival of Authors as a delegate. Three events in two days that were full of great authors and lovely gatherings of book-lovers. At the end of it, in addition to multiple signed books I walked away with a new-found appreciation for how teaching and education were pillars of every author’s talk.

The first event was an interview with Buffy Sainte-Marie and her biographer Andrea Warner. This is where I learned that Buffy had originally trained as an Elementary school teacher and that she views her work as a songwriter and performer as a way to continue teaching. She talked about how it was easier for people to hear the lessons she had to share when they were shared through music. My favourite part though was when the interviewer mentioned that Buffy often gives homework at the end of her performances and asked her to do the same for the audience I was a part of. Here’s what she said:

“One of them is a very Indigenous answer, but the other is a more general answer. Some will tell you that what you really want ain’t on the menu. Don’t believe them. Cook it up yourself as a creative person, and then prepare to serve it to them. Don’t just get mad at people for being the way they are. If you serve them what it is that you think is so wonderful, it’s going to be irresistible. That’s the way you make change.

The other piece of homework that I would give has to do with books, funnily enough. I always, at concerts, recommend several books. Of course, Bury My Heart at Wounded Knee by the late Dee Brown will tell you about the tragedies of the late 1800s. Another wonderful one, a skinny paperback that’s been out for a long time – I wish everybody would read it – is by Professor Jack Weatherford and it’s called Indian Givers. The last one that I’d like to recommend to you is going to break your heart. You think that truth and reconciliation is bad, and it was, and we’re dealing with it somewhat. Read a book called The Other Slavery by Andrés Reséndez. He did the research in Spain: names, dates and serial numbers – the enslavement of Native people in the Americas from the North Pole to the South Pole by the French, the English, the Dutch, the Spanish and the Portuguese. We really have not even touched on this yet.”

The next event was an interview with Madeline Miller. I had known going in that she was an incredible Classics author who did great work to humanize the work of ancient greeks. What I hadn’t learned was that while writing her first acclaimed novel, Madeline had worked as a high school teacher. During the talk she mentioned that her writing often would happen on larger vacation breaks from her teaching job because she felt that the emotional work of “being there” for her students was too similar to the work she did in empathizing with these classics characters. For me, as a reader, this level of care was incredibly apparent in her work.

The last event was a panel discussion between Rachel Giese, Sarah Henstra & Vivek Shraya. The focus of the event was feminism and gender dynamics in the author’s works, but all of the authors at some point or another spoke about their work in Education. Whether it was Vivek Shraya speaking about how the best thing they can do to help with gender identity and feminism is standing up in front of their students and teach them as a trans professor or Rachel Giese sharing anecdotes about her work with Elementary students on identifying the gender stereotypes present in their own thinking it was clear that education was an important part of all of their work.

Looking back, it shouldn’t have been surprising to me that the authors I love are also teachers. Learning and education are a huge part of my own identity as a reader. I am an avid lifelong learner and part of my venture to educate myself comes in the books that I choose to read. I am endlessly grateful that incredible teachers like Madeline and Vivek continue to educate through their writing.