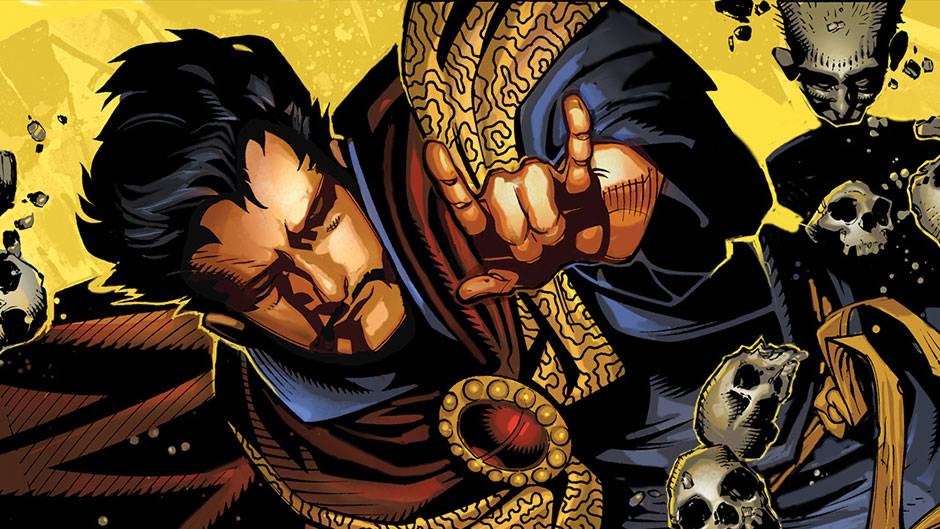 Doctor Strange is a character that I’ve always liked way more in theory than I have in practice. I have a soft spot for Doctor Strange: The Oath, his time on the unlikely squad of heroes The Defenders was always fun, and his position as a sort of dark manipulator in Hickman’s New Avengers really brought me to the character. But I’ve never quite clicked with him as a character on his own. I’ve been hoping that with a movie forthcoming, we’d see a bold new direction for the character in comics. And Jason Aaron, Chris Bachalo, Tim Townsend and Cory Petit deliver a really great introduction to the character.

This new issue begins with a great single page sequence that uses panels from several back issues of Doctor Strange to visually introduce characters to the major players in Strange’s life. Meanwhile, textboxes overlaid on the sepia-tinged panels take us through the flashback. It’s a great way to narrow down years of history into a concise and reader-friendly format. It provides the basics that you need to know, as well as giving you a hint of something more. It’s a format other first issues of long-standing characters could stand to innovate from.

The issue proper begins with a brilliant two-page spread of the good Doctor in action, armed with a shield and his signature hand gestures. Bachalo is an excellent penciler, but with a cartoony style that might not immediately jibe with all fans. However, Bachalo uses the page in ways that many “house-style” artists do not. Depth of field, loose panel borders and recurrent design elements are all staples of Bachalo. In this issue, we get treated to some wonderful monster designs, a kinetic feeling of movement and tentacles that frame panels and pages.

The Strange of this issue feels far fresher and a bit younger than his most recent appearances. Indeed, his usually grey sideburns are now a deep black. Perhaps that’s to reflect the casting of Benedict Cumberbatch for the feature film, but it also just seems to reflect a new direction for the character. (The Cumberbatchiness of the character can also be spotted in Strange’s casual wear, which sees his elaborate cape transform into a stately scarf while navigating Greenwich Village.) He still has his aristocratic bearing, but he feels looser, less concerned. If Mark Waid’s redirection of Daredevil was a return to the swashbuckling-era of that character, Aaron and Bachalo’s Strange is now a daring cavalier, a little more free spirited and perhaps a tad… sexier than previous incarnations.

There’s some fun supernatural world building as well, fleshing out and organizing the magic side of the Marvel universe. Strange meets some magical cohorts for a drink, which clues us in to some of the major players in the community. We also get a glimpse inside of the Eye of Agamoto – Strange’s mystical amulet, which allows him to see demons, monsters, soul eaters and more at work in every day life as he strolls down the street. Aaron likens them to bacteria that infest the soul, and the sequence is beautifully realized by Bachalo and especially Tim Townsend, whose heavy inks define the eerie creatures.

In all, the issue is a fun, spirited romp. It can be a little hard to figure out what the through line of the series will actually be, however, as it takes until the back third of the issue to hit upon an ongoing plot. Though some hints in this portion do give a sense of perhaps some Doctor Who in this Doctor’s DNA. Five dollars for this oversized issue can be a bit of a hard sell, especially for a character who does not have an in-built fanbase or who many are unfamiliar with. However, I had a lot of fun and am excited to see where it goes next, even if I am a little trepidatious about a similarity between the epilogue of this issue and a previous story arc of Aaron’s. Those curious about the character, those who like supernatural stories and anyone who’s looking for a good romp would be advised to check it out.