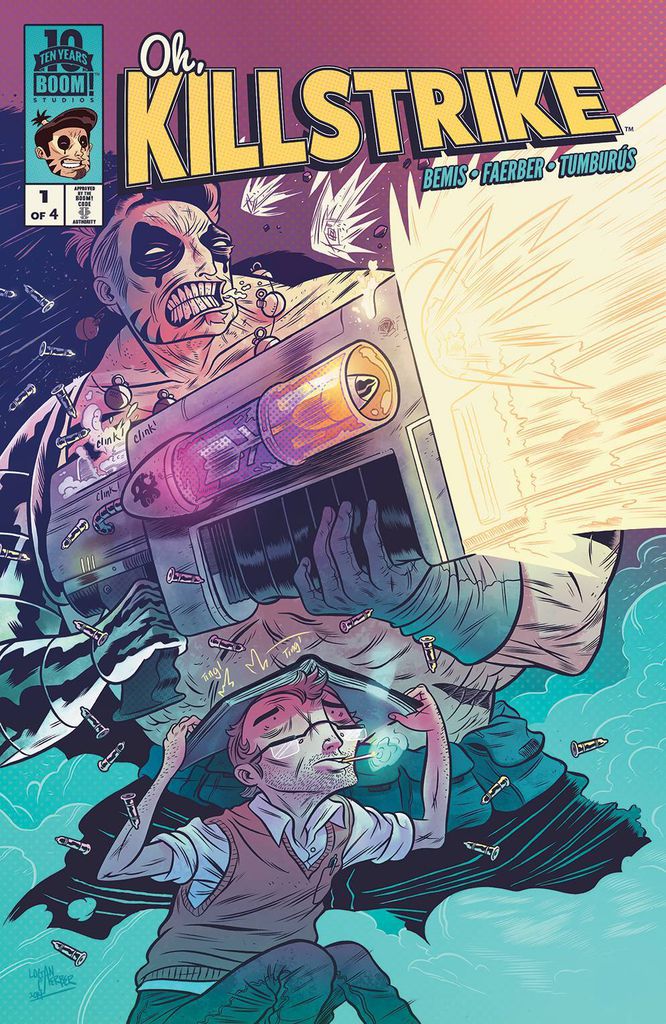 Sometimes there are comics that you don’t think you’re going to buy, but something catches your attention, and you decide to read the preview pages on ComiXology as a last chance to decide if a book is worth purchasing.

Now, I’ll be honest with you; it’s rare that a comic book grabs me within three pages. Like, seriously. I can’t even remember the last time it happened. My reading of preview pages is usually just a last resort thing: “I’m pretty sure I don’t want to buy this, so I’ll just read the first three pages in the ComiXology previews just to show myself that I’m not missing anything.”

I bought Oh, Killstrike #1 by Max Bemis and Logan Faerber because the first three pages of previews mashed so many of my buttons, I could have had my initials on a Galaga high score screen.

And that’s important. A first issue that intrigues you within three pages? That bodes well for an Art of the Start.

So what did those three pages do?

First, they’re easy to follow. There’s no world building. We’re dropped into a conversation between a husband and wife. About the value of a comic book. Killstrike #1 is now worth $100,000.00. And Jared owns a copy! They’re going to be rich! Meryl isn’t quite sure. Which gives Jared the opportunity to break it down for here, giving her — and the reader — a lesson on what happened to comics in the 90s in a rather charming style.

Now, I normally might balk at such blatant exposition, but as a longtime comic book reader who has had to field a lot of questions about comic books and the comic book industry, this conversation totally resonated for me. That may not resonate for everyone, but at least there’s a clarity to the situation here, so points to writer Max Bemis for that.

But I think what really had me put this comic in my cart was the way these pages were illustrated by artist Logan Faerber (accentuated with some great color work by Juan Manuel Tumburús). This is a story about comics in the ’90s, but it can’t be drawn like a ’90s comic book. Yet, there are points in this book that will need to evoke that art. Faerber’s got the indie art chops down pat — wide faces with button eyes and comically exaggerated mouths. Spindly fingers hold a smokestack of a cigarette. A baby’s cry winds through the room like a banshee’s wail. Smaller sound effects protrude into the frame like oblong soap bubbles. And when we DO get the promise of a ’90s comics character, Faerber manages to capture the accoutrement and impossible anatomy that look utterly ridiculous while still fitting into the cartoon world he’s crafted.

As the first issue continues, Bemis and Faerber begin to show us the chinks in Jared’s armor. For all his bluster about comics and making money “ironically” from the worst comic book ever made, we begin to sense there is a quixotic component to his quest. Finding that comic book and solving those money problems also means that Jared doesn’t have to spend time taking care of his new child. He’s diving back into his own childhood, even as he leaves his wife and child to go hunt through his mom’s attic.

And then, in a twist of magic realism, Jared finds the sought-after comic, only to have Killstrike, the main character, step from its pages and into Jared’s life.

The sequence that follows slams the the absurdity of grim-and-gritty comics characters into real life. Killstrike cannot fathom that most normal people do not have “enemies.” And now Jared has been saddled with a surreal new problem — what does one do with a grimly driven hero who has stepped out of a world framed by betrayals, revenge schemes, and the archest of nemeses? And how will this affect Jared’s life, as he has to deal with his marriage and fatherhood? Is Jared desperately entwining himself in his comics-centric past as a way of avoiding the present?

From the first issue, Oh, Killstrike promises to deliver something I’m not sure I’ve ever seen: a magical quest that employs the absurd tropes of ‘90s era comics to paint a nuanced portrait of a man at the crossroads of, y’know, real life.

I don’t know what lies in store for issue #2, but I’m utterly intrigued.

Did you read Oh, Killstrike #1? What did you think?

What’s cool, new, and worth talking about in the world of comics? Subscribe to our weekly podcast Oh, Comics! to find out.