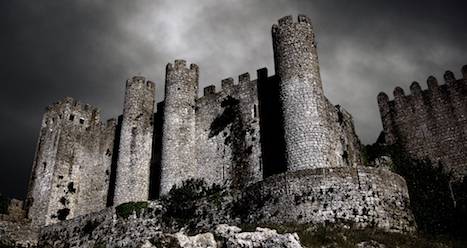 I have no doubt that I’m a medievalist in part because I have a deep and abiding love for all things Arthurian. Some of the earliest “adult” books I remember reading, usually with my mom, were Arthurian legends, or books based on Arthurian legend. My love of the genre has only grown over the years—and at one time created a crisis for me when I couldn’t decide if I wanted to become a legit Arthurian scholar or focus on a different area of medieval studies (I ended up reading medieval holy women, if you really want to know).

There has been much speculation and romanticizing about Arthur over the centuries. The medieval monk Gildas wrote the only extant contemporary account of a battle at Mons Badonicus (Mount Badon), which is the battle at which King Arthur supposedly drove the Saxons out of England. Archaeological evidence indicates that there was, indeed, a peace for roughly 100 years between the Celtic Britons and the Saxons following the battle. Winning at Mount Badon is generally considered to be Arthur’s crowning achievement of his reign in most of the legends and retellings out there (The Battle of Mount Badon, 2004).

After Gildas, later accounts by Nennius and Bede also mentioned Badon, though it is Nennius’s account which became more popular. Nennius’s version was much more engaging and exciting; it’s easy to see how it could capture the imagination of those who read it (Nennius, Camelot Project). Neither Gidas nor Bede mentioned an Arthur at all. The 12th century text by Geoffrey of Monmouth, Historia Regum Britanniae, expanded on the Arthur story (Geoffrey of Monmouth, Camelot Project). The manuscript was taken as a true account for many years, which could explain why the Arthur legend is so well-entrenched. Other than it’s badass, of course. Incidentally, the Historia Regum Britanniae also contains the first known version of King Lear.

Chretien de Troyes came next in the chronology of major Arthurian authors. His patroness was Marie de France, the daughter of Eleanor of Aquitaine. In the late 12th century, Chretien de Troyes wrote his Four Arthurian Romances, which appear to have been influenced by Geoffrey of Monmouth as well as other unspecified Celtic sources. These works reflect the ideals of the medieval French court and its concepts of chivalry, as well as the Courtly Love trope that was so popular at the time.

Then, in the mid-15th century, Sir Thomas Malory penned arguably the most famous version of the Arthur legend while he was in prison. Le Morte d’Arthur has influenced Arthurian literature since it was published by William Caxton in 1485. It was the primary source for Tennyson’s The Idylls of the King and TH White’s The Once and Future King.

Today, Arthurian legend remains a fairly popular literary genre, though I wish it was more so. I know, I’m biased. I wanted to share some of my favorite Arthurian novels with you all. One of my favorite kinds of Arthurian novel is the kind that takes the legend and makes it historical rather than fantastical. I do love a good fantasy version, complete with magic and wizards and spells, but what really blows my skirt up is when an author can convince me with historical fiction that Arthur might have been a real person. There are quite a few of these historical retellings on the list.

One thing I noted as I was researching for this post was how incredibly white the field is, possibly more so than many other fields (though this is just me eyeballing things. I could be wrong). I would really dig it if we could get some kind of Arthurian legend from some authors of color focusing on the people of color who would certainly have lived in Britain at the time (Swank, 2015). I did my best to find a few selections by authors of color—and thanks to my fellow Rioters who helped with suggestions—but this is a major gap in the genre. Also, I’m just going to say right now that I will not be recommending one specific and generally beloved retelling of the Arthur legend, so don’t @ me. Yes, I know it’s super popular. It is even one of my very favorite ones as well. But the author was a despicable human being and I can’t in good conscience recommend the novel anymore. The article I linked to ought to give you enough information to be able to figure out which book it is if you have somehow remained unaware of this problem with this particular author. 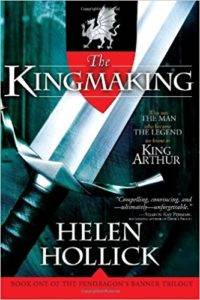 Historical retelling, focusing on Arthur’s early years when he was a 15 year old boy of unknown parentage through to when he took the throne.

Child of the Northern Spring (Guinevere series) by Persia Wolley

“Among the first to look at the story of Camelot through Guinevere’s eyes, Woolley sets the traditional tale in the time of its origin, after Britain has shattered into warring fiefdoms. Hampered by neither fantasy nor medieval romance, this young Guinevere is a feisty Celtic tomboy who sees no reason why she must learn to speak Latin, wear dresses, and go south to marry that king.”

Black Horses for the King by Anne McCaffrey

King Arthur needs horses big and strong enough to carry his knights. Galwyn, the son of a dishonored aristocrat, has the linguistic skills and love of horses to help Arthur get what he needs and make a name for himself in the process. 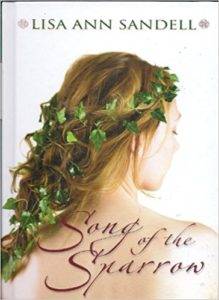 Song of the Sparrow by Lisa Ann Sandell

Written in prose, this is the tale of Elaine, in love with Lancelot, one of the only women in Arthur’s military base camp. She cannot trust her only companion, Morgan, with her secret, and when Gwynivere arrives, Elaine’s jealousy overwhelms her.

The Knights of Breton Court by Maurice Broaddus

“The King Arthur myth gets dramatically retold through the eyes of street hustler King, as he tries to unite the crack dealers, gangbangers and the monsters lurking within them to do the right thing. From the drug gangs of downtown Indianapolis, the one true king will arise.”

Fall to Earth by Ken Britz

A sci-fi retelling with a girl protagonist who is an Olympic fencing champion. Arthur is a scientist who invented something that could help the world or destroy it and he needs her help.

The White Raven by Diana Paxson

Based mostly on Celtic legend, this gorgeous version of Tristan and Isolde is told from the perspective of Branwen, Isolde’s cousin and lady-in-waiting.

A Tail of Camelot by Julie Leung

The first in a middle grade series based on Arthurian legend and told “from the perspective of Camelot’s most humble creatures: mice. Young mouse Calib Christopher dreams of becoming a Knight of the Round Table. For generations, his family has led the mice who live just out of sight of the humans, defending Camelot from enemies both big and small.”

Sword of the Rightful King by Jane Yolen

“The newly crowned King Arthur has yet to win the support of the people. Merlin must do something before the king is betrayed, or murdered, or—worst of all—gets married. So Merlin creates a trick: a sword magically placed into a slab of rock that only Arthur can withdraw. Then he lets it be known that whosoever removes the blade will rule all of England, and invites any man who would dare, to try to pull out the sword. But then someone else pulls the sword out first…”

The Lost Years of Merlin by TA Barron

A boy washes up on the shores of Wales with no memory, home, or name, and he is determined to find all three. He will, of course, become Merlin.

The Crystal Cave by Mary Stewart

“Born the bastard son of a Welsh princess, Myridden Emrys—or as he would later be known, Merlin—leads a perilous childhood, haunted by portents and visions. But destiny has great plans for this no-man’s-son, taking him from prophesying before the High King Vortigern to the crowning of Uther Pendragon…and the conception of Arthur—king for once and always.” 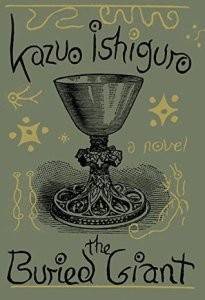 The Buried Giant by Kazuo Ishiguru

This one may be a bit of a stretch, but Gawain is there and I liked it, so it’s on the list. “In post-Arthurian Britain, the wars that once raged between the Saxons and the Britons have finally ceased. Axl and Beatrice, an elderly British couple, set off to visit their son, whom they haven’t seen in years. And, because a strange mist has caused mass amnesia throughout the land, they can scarcely remember anything about him. As they are joined on their journey by a Saxon warrior, his orphan charge, and an illustrious knight, Axl and Beatrice slowly begin to remember the dark and troubled past they all share.”

“The tale begins in Dark Age Britain, a land where Arthur has been banished and Merlin has disappeared, where a child-king sits unprotected on the throne, where religion vies with magic for the souls of the people. It is to this desperate land that Arthur returns, a man at once utterly human and truly heroic: a man of honor, loyalty, and amazing valor; a man who loves Guinevere more passionately than he should; a man whose life is at once tragic and triumphant.”

My Boyfriend Merlin by Priya Ardis

This one is a little fluffy for my tastes but it was a quick read and might be exactly what some younger readers are looking for. It imagines Arriane “Ryan” DuLac as a 17 year old high school student with a crush on biker boy Matt, who happens to be Merlin.

This graphic novel has King Arthur coming back to a post-apocalytpic Britain to save them all from zombies! More, please.

Daughter of Destiny by Nicole Evelina

Guinevere actually has a life and history of her own prior to meeting Arthur. This is the story of her early years.

Based on Arthurian legend. “Prince Rumon of France, descendant of Charlemagne and King Alfred, is a searcher. He has visions of the Islands of the Blessed, perhaps King Arthur’s Avalon, “where falls not hail, or rain, or any snow.” Merewyn grows up in savage Cornwall—a lonely girl, sustained by her stubborn courage and belief that she is descended from the great King Arthur. Chance—or fate—in the form of a shipwreck off the Cornish coast brings Rumon and Merewyn together, and from that hour their lives are intertwined.” 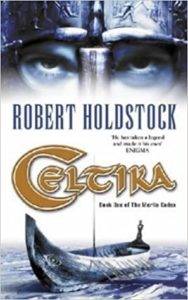 Merlin meets Jason of the Argus and goes with him on his quest to find the Golden Fleece. YES. “First novel in THE MERLIN CODEX from Britain’s most critically respected writer of the fantastic. In the centuries before he will become involved with Arthur, Merlin is immortal, almost young. He adventures across the world, and across unknown worlds. He becomes the friend of Jason, a Greek prince who seeks the Golden Fleece, and is involved with his enchantress wife, Medea. Through Greece, Finland, and other lands—and for the first time to England—the skein of Merlin’s tale leads to heroism, treachery and magic.”

From Guinevere’s perspective, the tale of “the golden child whose dearest friend is a saint who hears spirits singing; of the gentle-hearted woman who begins to dream of love, glory, and the fierce, proud king who will become her husband; of the passionate beauty whose name will be remembered and hated for centuries.”

Geoffrey of Monmouth. “Arthurian Passages from the History of the Kings of Britain.” Trans. JA Giles. The Camelot Project, University of Rochester, retrieved 2 Nov 2017. http://d.lib.rochester.edu/camelot/text/geoffrey-of-monmouth-arthurian-passages-from-the-history-of-the-kings-of-britain

Nennius. “From: The History of the Britons (Historia Brittonum).” The Camelot Project, University of Rochester, retreived 2 Nov 2017. http://d.lib.rochester.edu/camelot/text/nennius-history-of-the-britons