Chosen Ones by Veronica Roth.

Fifteen years ago, five ordinary teenagers were singled out by a prophecy to take down an impossibly powerful entity wreaking havoc across North America. The Dark One leveled cities and claimed thousands of lives; the Chosen Ones, as the teens were known, gave everything they had to defeat him. On the tenth anniversary of the Dark One’s defeat, the Chosen Ones, now adults, discover the Dark One’s ultimate goal was much bigger than they could have known—bigger than the world itself. But saving the world the first time was hard enough for Sloane Andrews and her fellow Chosen Ones. And this time, fighting back might take more than Sloane has to give. 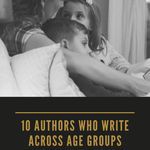 The 10 authors on this list refuse to be pigeonholed. They write for many audiences, reaching out to readers across age groups. Through their wide rage of published works, these authors cover themes and create characters who speak to many different types of people. And if you’re the type of reader who enjoys reading adult, young adult, middle grade, and children’s books, then these authors can reach out to you in nearly every corner of your reading life.

Jason Reynolds writes novels and poetry for young adult and middle grade readers. Reynolds’s goal is to write books for younger audiences (especially boys) who might be reluctant to read: “I know there are a lot — A LOT — of young people who hate reading. I know that many of these book haters are boys. I know that many of these book-hating boys, don’t actually hate books, they hate boredom… even though I’m a writer, I hate reading boring books too.” But even if you’re not a young adult or middle grade boy who hates reading, you’ll enjoy Reynolds’s work too.

In March 2020, Reynolds teamed up with Ibram X. Kendi to “remix” Kendi’s book Stamped from the Beginning into a young adult version called Stamped: Racism, Anti-Racism, and You. Another great Reynolds YA book to try: Long Way Down, a young adult novel in verse. And my middle grade pick for Jason Reynolds? As Brave As You, a heartwarming story about two brothers.

Leigh Bardugo is mostly known for her young adult fantasy, but recently she took her first foray into the world of adult fiction with her novel Ninth House. If you’re into the occult, you’re going to want to pick this one up. This book is already being developed into a series by Amazon Studios. So read it now so that when the show starts, you can be that smug person who knows where the story is going. I love being that person.

Aside from her adult novel, Bardugo has written many highly acclaimed YA novels. Some highlights: Six of Crows, Shadow and Bone, and King of Scars.

Lauren Oliver truly does it all. She writes books for young adults and middle grade readers, and she wrote a paranormal novel for adults called Rooms, which is narrated by two ghosts. Oliver started her journey as an author by writing fanfic before she’d even heard of fanfic as a term: “when I read a book I loved, I would continue to write sequels for it.” Little did she know back then that one day people would be writing fanfic about her books.

Oliver’s most recent YA novel is a murder mystery story called Broken Things. If you want to check out her middle grade novels, try Spindlers or Liesl & Po.

Louise Erdrich is another author who writes across multiple genres for many audiences. Her extensive bibliography includes novels, poetry, children’s books, short stories, and a memoir. Her most recent novel for adults is The Night Watchman. The story is based on Erdrich’s grandfather who worked as a night watchman and “carried the fight against Native dispossession from rural North Dakota all the way to Washington, D.C.”

If you’re interested in reading Erdrich’s middle grade books, her most recent book is Makoons, which is book 5 in The Birchbark House Series. And if you’re the type of person who likes to dive into a series, she has two for adults as well: The Love Medicine Series and Justice Trilogy.

My personal favorite of Snyder’s middle grade novels is Orphan Island, a magical realist coming-of-age story set on an island where nine children live without adults. My Jasper and June is her most recent book for middle grade readers.

As for her children’s books, check out Charlie & Mouse and its sequel, both illustrated by Emily Hughes, or Swan: the Life and Death of Anna Pavlova, illustrated by Julie Morstad. But truly, she has many great books to choose from.

A quadruple threat, author Jacqueline Woodson writes picture books, middle grade books, young adult novels, and adult fiction. Oh, and poetry. A quintuple threat then. She also hosted an excellent TED Talk, and if you’ve ever felt bad about how slow you read compared to all your other bookish friends, you should watch Woodson’s TED Talk. Then go out and pick up one (or several) of her books.

Most recently, Jacqueline Woodson released her adult novel Red at the Bone. Her most recent book for children is The Day You Begin, illustrated by Rafael López. You also don’t want to miss her middle grade memoir written in verse, Brown Girl Dreaming. I promise you’ve never read anything else like it.

Holly Black writes fantasy novels for both children and teens. She has also contributed to many anthologies and wrote a paranormal short story collection for young adults titled Poison Eaters and Other Stories. Her bibliography is pretty extensive, in other words, and speaks to many age groups.

Black’s most well-known middle grade work is probably The Spiderwick Chronicles, which was adapted for the silver screen in 2008. She also recently wrote a middle grade novel about the Disney character Maleficent, entitled Maleficent: Heart of the Moors.

If you’re familiar with young adult books at all, then you’ve probably heard of her novel The Cruel Prince. Published in 2018, The Cruel Prince is the first novel in the Folk of the Air series. Amazingly, the second two books in the series are already out. So as you can tell, Holly Black is a prolific writer, and we can probably expect a lot more books from her for both teens and children.

Speaking of writers with a large and impressive bibliography…Neil Gaiman probably needs no introduction at this point. He has so many books for so many different age groups that chances are you’ve run into at least one of them by now. Gaiman writes across many age groups and genres. Prose, poetry, film, journalism, comics, song lyrics, and drama…you name it, he’s probably written it.

Gaiman has written many picture books for children, such as Crazy Hair, illustrated by Dave McKean. His middle grade novel Coraline won the British Science Fiction Award, the Hugo, the Nebula, the Bram Stoker, and the American Elizabeth Burr/Worzalla award. And it was adapted into a musical and a film. Gaiman’s works for adults are equally popular. I recommend American Gods, which has also been adapted into a television show.

Who doesn’t know and love Jenny Han and her sweet YA romance novel To All The Boys I’ve Loved Before? You probably also know the two sequels P.S. I Still Love You, and Always and Forever, Lara Jean. You might also be aware of her YA series Summer I Turned Pretty. Or the Burn for Burn trilogy. But she writes more than YA. She also writes books for middle grade readers.

In fact, Jenny Han started off writing middle grade novels, and she has published two middle grade books so far: Shug and Clara Lee and the Apple Pie Dream. Han wrote Shug while she was still in college in 2006. She’s also a former children’s bookseller and children’s librarian, so she really knows her children’s lit stuff.

Nick Hornby is most well-known for his snappy, intelligent, and often comedic adult fiction. His novels for adult readers, like High Fidelity and About A Boy, are popular for a reason. They’re a whole lot of fun. On top of that, Hornby has established himself as a screenwriter. He was nominated for an Academy Award for his screenplay adaptation of the memoir An Education. More recently, he wrote the screenplay for the film Brooklyn, and he was nominated for an Academy Award for this one as well.

But while Nick Hornby has written about young characters in some of his book, he has thus far only dipped his toe in the young adult writing pool with his one YA novel, Slam. In an interview with The Atlantic, Hornby revealed that he didn’t find the challenges of writing a young adult novel that different from those of an adult novel: “I think the moment that you’re writing fiction that’s not about yourself or someone extremely like you then the challenges are the same… The moment you’re using a frame of reference that’s not your own, then it’s hard work, whatever it is.” Perhaps this means we’ll see another YA novel from Hornby one day?