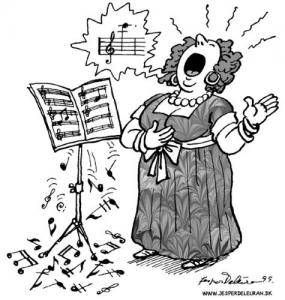 If it’s mid-winter, then we must be in the thick of opera season- am I right?  Now, I hear some of you saying, “wait, isn’t opera just for diamond-wearing, yacht-buying, mansion-building, nose-in-the-air billionzillionaires?” Well, to you I say:

Ok, no, really, as a person who has never been rich but has loved opera for a long time, I can tell you that, as with many things, with opera where there’s a will, there’s a way: i.e. BALCONY SEATS. Yes, I know, you can’t really see the singers’ faces without binoculars and you can’t feel their spit on your face, but at least you’re there! There’s just something about actually being in an opera house, listening to the raw, wonderful vocals wash over you and seeing the musicians pushing their instruments to the limit in the pit. It’s a good feeling, very different from listening to a recording (but still, thank goodness for recordings; otherwise, we would have to do what they did in the 19th century- go night after night to the opera until we had memorized the music. Now that, my friends, is expensive…).

But here I am getting to the bookish part of this post! Opera, in short, is very much alive in the 21st century. World premiers are staged all the time, around the world, and classics are still being performed to sold-out houses. AND PEOPLE ARE STILL WRITING LIBRETTI. (For non-opera people, a “libretto” is the text of an opera). But not just any people- famous living writers! I’m talking Amy Tan, David Mitchell, Margaret Atwood, and Annie Proulx, to name a few. They’re writing original libretti and even adapting their own works, suggesting that our fascination with the interplay of words and music is as vibrant as ever.

Below, for your viewing/listening pleasure, are some clips from recent Tan and Mitchell operas. I’ve also thrown in a list of other writers (living and dead) who have libretto connections. This is not an all-inclusive list, so please tell us about others in the comments!

Tan turned her novel The Bonesetter’s Daughter (2001) into an opera in 2008; it premiered at the San Francisco Opera, which had commissioned the work (the composer was Stewart Wallace). Going from novel to libretto isn’t easy in any universe; according to Tan, “the key was really to cut out the words and let the music stand for the emotions, because that’s what opera is. It’s music, it’s performance, it’s great voices. And the story was a framework in a way.” Both the novel and the opera revolve around the complicated relationship between a Chinese-American woman and her immigrant mother.

Category ID: 473
Category ID: 1005
Unusual Suspects Newsletter
Sign up to Unusual Suspects to receive news and recommendations for mystery/thriller readers.
Thank you for signing up! Keep an eye on your inbox.
By signing up you agree to our terms of use
[youtube]http://youtu.be/-M4rmrDMcjU[/youtube]

I just finished my first Mitchell novel, Cloud Atlas, several days ago, and boy was it fantastic. Imagine my surprise when I learned that Mitchell has written not one, but TWO libretti! Oh happy day! The first, Wake, which is based on the 2000 Enschede fireworks disaster in the Netherlands, was set to music by Klaas de Vries and performed by the Dutch Nationale Reisopera in 2010. Here’s more about the opera’s genesis.

Mitchell recently finished another opera (“an occult-mystery film opera”), Sunken Garden, with music by the Dutch composer Michel van der Aa. It was staged by the English National Opera in 2013. Apparently it’s a mixed-media opera in every sense of the phrase.

That’s right. Margaret Atwood is all UP in the libretti ’cause she’s awesome. Pauline, which will premiere at the Vancouver City Opera House in May of this year, explores the life of Canadian writer, actor, and poet Pauline Johnson. City Opera Vancouver says of the work: “Haunted by failure, tortured by her dual identity… Pauline Johnson fights to confront her past before the end, as her doctor tries to control the pain and her sister tries to control the story that will be told.”

And did you know that The Handmaid’s Tale was turned into an opera by librettist Paul Bentley and the Danish Royal Opera in 2000??? Neither did I!!!

Brokeback Mountain, which had been turned into a film in 2005, has now been turned into an opera! It recently premiered at Madrid’s Teatro Real with Proulx as librettist and Charles Wuorinen as composer (the performance runs through February 11). What’s particularly interesting about this adaptation is that usually libretti (in these cases) are condensed versions of longer works, but with Brokeback Mountain, as Proulx explains, the story itself was already compact. Therefore, “the opera, the libretto, gave a chance for depth and for the characters to grow.” Furthermore, Proulx expanded the role of Alma’s character and even change the ending. So in the near future, look for “Brokeback Mountain: The Opera” at an opera house near you, y’all!

Ok, if you’ve read this far, you will probably be interested in these little tidbits of operatic information:

Alfred Bester was what you might call a Renaissance Man of the literary persuasion. Not only did he write for comics, radio, and television, but he also produced English libretti for Giuseppe Verdi’s La Traviata and Modest Moussorgsky’s The Fair at Sorochinsk. Dayyymn, Al. Did you ever sleep?

Ann Patchett‘s novel Bel Canto (I highly recommend it, by the way) is being turned into an opera as we speak, to premier at the Lyric Opera of Chicago during the 2015-16 season. The composer is Jimmy López and the librettist is playwright Nilo Cruz.

Thomas Pynchon applied for a Ford Foundation Fellowship in 1959 to write either an original libretto or an adaptation of either Ray Bradbury’s Martian Chronicles or Alfred Bester’s Demolished Man. He was unsuccessful (see The Cambridge Companion to Thomas Pynchon).