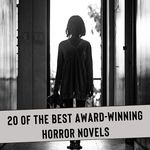 It’s that time of the year when the lists start to come out detailing the best of the year in books, movies, television, music, etc. It’s fun to see things you’ve enjoyed on these lists, and it’s exciting when things you love win awards, too! Take books, for instance. There are as many literary accolades as there are days in the year, easily. And they give them out in every genre, all year long. Let’s look at oh, say, horror books. There is an endless supply of award-winning horror books.

I picked horror books, mostly because they’re awesome and I’ve read a lot of them. Yes, Halloween is four weeks behind us now, but if you’re anything like me, you find reading scary books exciting year-round! You would not be surprised to hear that Stephen King has won a gazillion awards for his books. Everyone knows Stephen King. But there are hundreds of thousands more authors writing scary stuff, many of them also win awards, and a lot of them could use more attention.

From the Bram Stoker Award and the Shirley Jackson Award, named for literary giants in the genre, to the Lambda Literary Awards and the Man Booker International Prize, here are 20 brilliant books of varying creepiness to keep you searching the shadows and sleeping with the lights on. Each title includes a mention of an award it has won, but many of them have won multiple awards. And remember, these are horror books, so you’re bound to encounter all kinds of disturbing stuff in them, so proceed with caution, if necessary.

Okay, I know it’s weird to start off with the least scary book, but this list is in alphabetical order. I love this book with the heat of a thousand suns and had to include it. It’s a gothic debut about a group of human/dog hybrids created in the 19th century, who leave their castle and come out into society after their creator dies. It’s a bit like Edward Scissorhands, with dogs.

You can go home again — but it might not be what you thought it was. Ex-cop Mona Bright moves into her deceased mother’s home in the town of Wink. The little New Mexico town seems perfect, but Mona soon learns that the people who live there are not at all as they seem.

Clown in a Cornfield by Adam Cesare (Stoker Award for Best YA Novel, 2020)

There are a lot of people who think clowns are scary, but for those of you who need more of an explanation: meet Frendo. He’s the jolly clown mascot Baypen Corn Syrup Factory. But when the factory shuts down, Frendo is out of work. So he decides murdering the local kids will keep him busy. Idle hands, you know.

Sunglasses After Dark by Nancy A. Collins (Bram Stoker Award for Best Novel, 1989)

And for you vampire fans, this is the first in a six-book series! It’s about Sonja Blue, a former heiress turned punk rock bloodsucker still in possession of her soul. Sonja travels the globe, killing the very creatures who brought about her current condition, and trying to protect the innocent people who come between them.

This is a mesmerizing werewolf story, a confession of sorts told to a professor in India by a mysterious stranger. The incredulous story the stranger shares is full of bloodshed and terror, and goes back centuries. And there’s no sign that it’s going to stop.

The Living Blood by Tananarive Due (American Book Award Winner, 2002)

This is the second book in Due’s excellent African Immortals series. It’s about a family in the present day who must contend with the fallout of a 400-year-old pact that was made by humans in exchange for immortality. Because all immortality comes with a curse. And a body count.

This is most definitely not a book for people afraid of clowns. It makes Pennywise look like Mr Rogers! Jamie has the misfortune of crossing paths with a terrifying clown. Now he’s the newest member of the centuries-old Pilo Family Circus, living in a horrific alternate universe. But he’s not Jamie anymore, he’s JJ, and he’s got the scary new personality to boot.

A young woman with a twisted stomach inside her body who grew up on a meat farm must contend with life with her condition and the horrible, surreal world she experiences outside her home. This book has a list of awards and nominations a mile long!

The shape-shifter Coyote is set on a murderous rampage, determined to rid the world of the humans ruling the new world. But he will come up against fierce opponents, making this a clash of evil that may leave no one alive.

The Silence of the Lambs by Thomas Harris (Bram Stoker Award for Best Novel, 1988)

Pretty much everyone knows this novel because of the movies and television show. But there’s a reason it’s became so popular: it’s really scary. The story of Hannibal Lecter, the cannibal we all know and love, and FBI rookie agent Clarice Starling is a great tale of the triumph of evil over, er, more evil.

Oghi is left paralyzed by a car accident that also took the life of his wife. He spends his days in bed, tended to by his mother-in-law, who has started spending a lot of time in the garden. Too much time. Why is she digging all those holes?

Four American Indian men are the subject of a hunt when a supernatural entity returns to punish them for youthful transgressions. This is another book that has won and been nominated for a zillion awards, along with several of SGJ’s other books.

And this is an absorbing, disturbing story of body horror. It’s about a young woman named Yeong-hye, who decides to give up eating meat after having terrifying, bloody dreams. But her new diet is upsetting to her family, and as they attempt to control Yeong-hye and her eating habits, her behavior starts to get more dangerous.

And this is a tall tale — of terror! Two widowers take up fishing together as a way to deal with their grief. But their search for the ultimate fishing location will lead them to unimaginable horrors.

The Changeling by Victor LaValle (Winner of the Best Horror Novel at the British Fantasy Awards, 2018)

A new father goes on a quest and searches for answers when his wife commits a horrific act of violence and then disappears. This book won multiple awards and was nominated for dozens more, and is being adapted for the screen!

None Shall Sleep by Ellie Marney (Aurealis Award for Best Horror Novel, 2020)

I call this “Silence of the Baby Lambs.” It’s a really scary YA novel set in the 1980s, about two teens recruited by the FBI to help catch a killer who murders teens. They both have dark pasts, and will have to confront another killer to get help in their quest.

A young woman suffering from life-like nightmares in which she gleefully murders those around her seeks help from a psychiatrist. But instead of relief, her nocturnal chopping sprees threaten to become reality and take over her life.

Everyone always talks about Boy’s Life, but this has my vote for McCammon’s best book. It’s an epic about an apocalyptic wasteland, where people across the United States must choose a side in the battle of good versus evil. If you’re looking for something similar to The Stand, this will make you very happy.

Mexican Gothic by Silvia Moreno-Garcia (Winner of the Best Horror Novel at the British Fantasy Awards, 2021)

Set in Mexico City in the 1950s, this is the story of a young woman named Noemí Taboada who is sent to check on her cousin after receiving a disturbing letter. Upon arrival, her cousin explains that her wild accusations against her new husband and his family were a mistake. But the more time Noemí spends in the house, the more she believes the letter.

The Girl from Rawblood by Catriona Ward (Winner of the Best Horror Novel at the British Fantasy Awards, 2016)

Catriona Ward is a formidable recent name in horror, with The Last House on Needless Street this year and Sundial coming next year. This is her debut novel, a gothic tale about a young woman named Iris who is determined to find out why generations of her family have died young, under mysterious circumstances.

Hopefully you found a book or ten you are interested in reading! And for more horror recommendations, check out Tips for Reading Horror When You’re a Scaredy Cat, 15 LGBTQ Haunted Horror Novels, and 8 Feel-Good Horror Books That Are Both Scary and Fun.