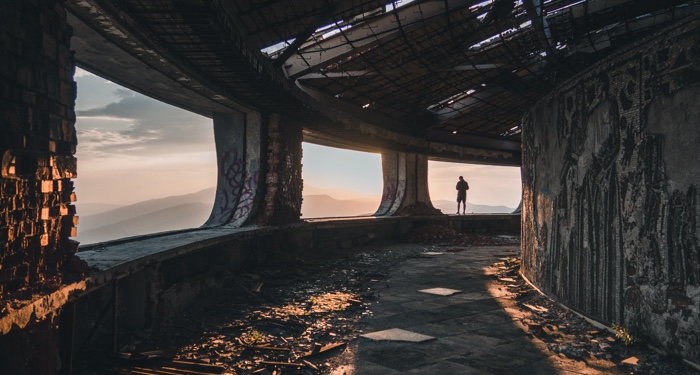 Even though things are bad right now, this list of dystopian books reminds us that things could be worse. Read on to find some books to cheer you up in a morbid way.

I am not usually a “things could be worse” type of person. However, it feels like we’re living in the early pages (or maybe the prequel) of a dystopian novel right now. This pandemic is causing understandable feelings of uncertainty, fear, and anxiety for many people. (It’s me. I’m many people.)

As a big fan of dystopian literature, I am reminded that authors have prophesied much worse fates for us. My aesthetic tends toward cheerful nihilism, so please don’t take this as toxic positivity. I know things are really bad, but hopefully reading about some even badder things will cheer us up!

Enjoy this list of dystopian reads that remind us things could be worse. 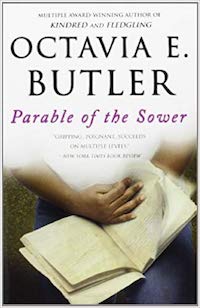 The Earthseed Series by Octavia Butler

In what was supposed to be a trilogy, but ended up a two-book series, the incomparable Octavia Butler tells the story of Lauren Olamina. Olamina lives within a walled community in the California of 2024 (which was the distant future when Butler wrote the first Earthseed novel in 1989). In Parable of the Sower, Olamina is a savvy though sheltered teenager who is already preparing for the inevitable fall of her city’s walls. Outside, the world is full of chaos, sickness, and violence. It is especially dangerous for people like Olamina, who has hyperempathy. This condition causes her to feel the emotions and physical injuries she sees in others. (Fellow empaths, we identify with that right now, amirite?)

In addition to her plans for survival, Olamina also “discovers” a new religion: Earthseed. Parable of the Talents follows the rise of Earthseed after Olamina leaves her fallen community behind. Both books see Olamina and her friends surviving a world ravaged by capitalism, where the poor fight, murder, and steal for food, shelter, and pleasure. Butler’s 2020s are a terrifying place that will show readers exactly how much worse things could be. 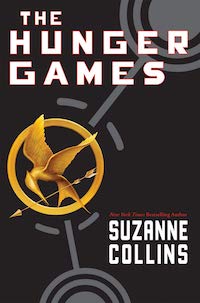 The popular Hunger Games trilogy (to which author Suzanne Collins will soon be adding a prequel) follows Katniss Everdeen, who lives in a poor district of a post-apocalyptic North America. Panem is made up of 13 districts required to work to support a luxurious lifestyle for the residents of The Capitol. Meanwhile most of the rest of Panem remains impoverished.

The most disturbing aspect of this dystopian series is that children are annually forced to fight to the death. They battle in nightmarish arenas designed to pit them against the terrain as well as their peers. This battle is broadcasted for the entertainment of The Capitol and as a warning to the districts. The child that survives the elements, mutated creatures, fabricated disasters, and the other 23 children trying to kill them, wins! The Capitol gifts the winner a comfortable home in their district, food, and celebrity status for life.

So…at least we don’t live in a world where the best we can hope for our children is to be poor and hungry or survive the Hunger Games and live with their trauma in comfortable accommodations. [insert nervous chuckle and silent scream]

*The new prequel, The Ballad of Songbirds and Snakes, is slated for release on May 19, 2020. You can watch a trailer here. 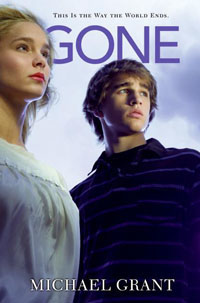 The Gone Series by Michael Grant

YA dystopia is excellent at reminding us that things could be worse, and this series is a master class on how bad can always get worse. In book one, Gone, everyon over the age of 15 in a California town disappears suddenly. Further complicating matters, an impenetrable barrier surrounds the town, allowing nothing in or out.

As if the kids in book one didn’t have enough to deal with, considering that older teens and adults vanished, they have to see to all of the unfinished tasks the missing left behind. That means finding unattended babies, turning off stoves before fire consumes them all, looking for car crash survivors, and more. Oh, and some of them suddenly have superpowers.

Unfortunately, that’s only book one. Considering that whole impenetrable dome thing, it’s not surprising book two is called Hunger. It gets really bad, y’all. I mean, the next three books are called Lies, Plague, and Fear. The good thing about this dystopian series that reminds us things could be worse? It also reminds us that we can survive bad things. The series concludes with Light. 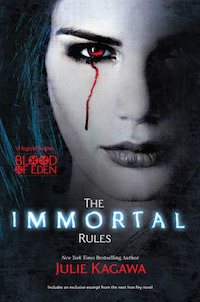 The Blood of Eden Series by Julie Kagawa

Okay, would it be a Mikkaka Overstreet list without a vampire book? Of course not! Thus, here is a dystopian vampire read that features a world worse off than our own.

The Immortal Rules is the first book in this young adult series. After a virus called the Red Lung wipes out most of humanity, the remaining people are struggling to survive their new world. Most live within walled cities, where they are enslaved and required to give blood monthly to feed their vampire overlords. That is, unless they’re unregistered, like main character Allison Sekemoto.

Unregistered humans face danger and starvation as they try to avoid discovery by either the ruling class of undead and other vicious unregistered human gangs. As if this isn’t bad enough, attempts to cure the Red Lung also created another class of predator. Rabids are bloodthirsty creatures who prowl the wilderness outside the walls, preying on both human and vampires.

The Immortal Rules is followed by The Eternity Cure and The Forever Song. There is also a prequel, Dawn of Eden. 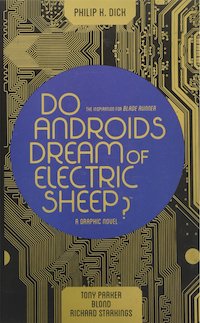 Do Androids Dream of Electric Sheep? by Philip K. Dick

This is the only read on this list that isn’t a series, but I couldn’t leave it out. Do Androids Dream of Electric Sheep? inspired the movie Blade Runner. After a global world war that decimated Earth and left it radioactively polluted, most people moved to colonies on Mars. The remaining humans on Earth live in a far worse world than we do now.

People spend most of their time at home, watching nonstop television or using their “empathy boxes.” These boxes supply a virtual reality experience of suffering, important in a world trying to fix the lack of empathy that caused its near destruction. Additionally, humans display empathy by owning animals. Sadly, since most animals are extinct, the poor can only afford electric animals—a truth they desperately conceal.

The story follows a police officer whose job is to find and “retire” realistic androids that have escaped servitude on Mars and are hiding on Earth. Empathy tests are used to determine who is android and who is human, but it isn’t easy when the major corporation that creates the androids continues to undermine the tests and make more lifelike models. The whole story leaves readers with philosophical questions about what it means to be human. Furthermore, anyone reading it right now would definitely be reminded that things could be worse.

If dystopian fiction cheers you up, you might also enjoy these posts:

Dystopian Literature You Need to Survive the End of the World