If you had a million extra hours and a urinary catheter, you might be able to watch all the available Sherlock Holmes adaptations the world has to offer.

Sir Arthur Conan Doyle’s infamous consulting detective made his first literary appearance in 1887. He got his start in serialized escapades in which he was enigmatic, frustrating, and, eventually, always right.

Since then, Holmes has been busy. So busy that the Guinness Book of World Records dubbed him the most portrayed literary character in film and television history. And that was eight years ago.

So where do you start? What’s worth watching? With more than 250 screen adaptations of Sherlock Holmes’s adventures, there’s no way to rank them all. But here are my picks for TV and film, ranked by how well they translate one of fiction’s most memorable characters. 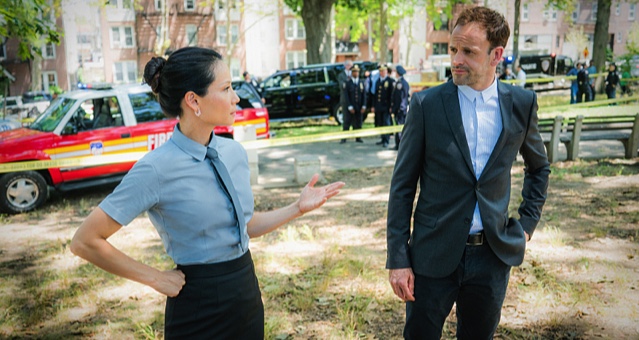 A modern version of Holmes. A gender-flipped Watson. A New York City setting. All wrapped up in the form of a CBS crime procedural. Elementary had the potential to be a spectacular failure. Instead, it charmed. It makes a certain kind of sense: Doyle’s serialized detective adventures serve as an urtext for the modern procedural, recreating a pleasant format with each new episode. While the format of Elementary isn’t particularly revelatory, the chemistry between its two leads elevates the entire production. Jonny Lee Miller plays a gleefully unhinged Holmes, recovering from drug addiction. He’s matched perfectly with Lucy Liu as a patient but firm Joan Watson, Holmes’s post-rehab sobriety companion. If you’re a Sherlock purist, you may skip this one. But if you like your 221B any which way you please, there’s lots to love.

The literally explosive first episode of this gender-flipped Japanese interpretation of Sherlock is guaranteed to grab your attention. Relocated to Tokyo, the newest title on this list also features one of the sexiest incarnations of Sherlock to date. Returning to Japan from volunteering in Syria, Dr. Wato Tachibana (Shihori Kanjiya) stumbles into a deeply personal mystery and the emotionally obtuse path of Sara Shelly “Sherlock” Futaba (Yūko Takeuchi). The first images of Sherlock in her tan trench, stilettos, and swaggering stance are hard not to be attracted to. Both lead actresses play their parts flawlessly; my only real knock against the adaptation is Sherlock and the good doctor’s somewhat inconsistent chemistry with each other. 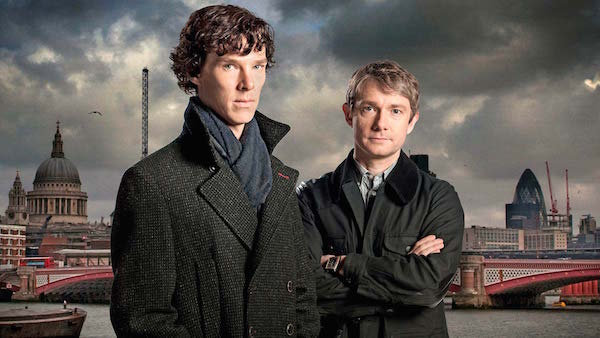 I’m half-tempted to break this ranking into two. The first two seasons of the BBC’s modern Sherlock Holmes adaptation are near perfection, drawing on Doyle’s original stories and faithfully updating them for the 21st century and its technological complications. The final two seasons? It was hard to hear them over the sound of my extended sigh. Just as he did when helming Doctor Who, producer, writer, and co-creator Steven Moffat contorts his Holmes and Watson into increasingly complicated and absurd storylines. (We will not discuss Mary Morstan; it’s still too painful.) But what keeps this show at No. 2 on this list is the interplay between its spot-on leads: Benedict Cumberbatch as a surly, brusque Holmes, and Martin Freeman bringing his Hobbit all to an exasperated Watson.

Jeremy Brett’s run as Holmes is legendary, and deservedly so. He embodies all the characteristics of Doyle’s original detective and fills him out even further with a deep, detailed inner life. The show itself feels the most full of all Sherlock Holmes adaptations, with details and staging that bring its Victorian setting to life. For faithfulness to its source material and the spirit of the work, this adaptation is hard to beat. The same can be said of the subsequent The Return of Sherlock Holmes, The Case-Book of Sherlock Holmes, and The Memoirs of Sherlock Holmes, each of which showcases Brett’s studied Holmesian brilliance. As a bonus, the foley work and sound engineering of these adaptations have a hypnotic ASMR crispness.

I watched this adaptation for the first time recently, and it is absolutely bonkers. The movie opens with a rather hedonistic retelling of the Baskerville legend, complete with its hound from hell. (Care warning for attempted sexual assault.) The production values have the campy flair of other horror movies from Hammer Films, like The Curse of Frankenstein. And the result is a memorable adaptation of Doyle’s most famous Holmes story, if not one I find all that re-watchable. Alongside the attention-grabbing visuals, Peter Cushing chews scenery in his first outing as Holmes, and Christopher Lee—just years away from playing Holmes himself—stares pointedly as a beleaguered Henry Baskerville.

Like I could omit a movie with Vincent Price hamming it up as animated mouse analog for Professor Moriarty. Based on Eve Titus’s Basil of Baker Street, the film features the meta concept of a rodent world that directly emulates the real world. While Sherlock Holmes and John Watson inhabit 221B on Baker Street, beneath them, you’ll find Basil, the titular mouse detective, and Dr. Dawson, a mouse veteran. They’re on the case of a missing toymaker ensnared in the schemes of the villainous Professor Ratigan. Obviously, it’s not a perfect adaptation, but it captured the dynamics of Doyle’s world—and paved the way for Disney’s animated renaissance of the ‘90s. (Care warning: Some elements have aged particularly poorly, including Basil’s introduction in racist disguise.)

There are no two ways about it: Robert Downey Jr.’s turn as Holmes is wild. The Guy Ritchie-directed Sherlock Holmes and its sequel A Game of Shadows (2011) are less about adapting the original stories and more about kidnapping them to harvest their parts. Here, Holmes is an eccentric action hero, complete with elaborate fight scenes. While it’s far from a faithful adaptation, Downey Jr.’s off-the-wall energy is undeniably charming—especially played against the steadfast presence of Jude Law as Watson. The equation makes for perfectly enjoyable, if not perfectly Holmesian, movies. And there’s more to come: a third movie—plot unknown—is scheduled for 2021.

Billy Wilder’s take on Sherlock Holmes is predictably comedic and absurd—and much more. It’s part parody and part homage, concerned with the disparity between the Holmes of “real” life and the Holmes of Watson’s stories. Sherlock, portrayed by Robert Stephens, is full of witticisms. Take this assessment of a prima ballerina in Swan Lake, for example: “Very strong arches, I must admit.” Holmes’s ambiguous sexuality is a running theme, but it’s treated with sincerity and compassion as often as it’s used as a punchline. The main mystery is a solid one, too, if bizarre. An unknown Belgian woman is fished out of the Thames and dropped at Baker Street. The ensuing investigation leads to Mycroft, Scotland, and the Loch Ness Monster… 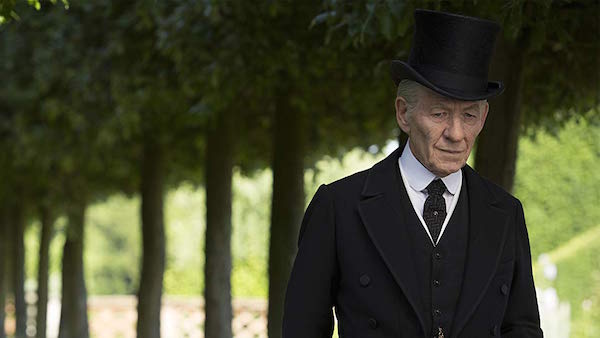 While not strictly an adaptation of canon, this quiet little gem has much to offer for those who’ve consumed all traditional Sherlock Holmes interpretations. Adapting Mitch Cullin’s A Slight Trick of the Mind, the movie finds a 93-year-old Holmes (Ian McKellen) in retirement, struggling with perhaps the most tragic circumstance he could imagine: memory loss. McKellen and his prosthetic nose do some work in this role as a thinking man who can no longer rely on his own mind. Watson, Mycroft, and (presumably) Mrs. Hudson are long gone, leaving Holmes alone and at his most vulnerable. But Laura Linney is here! And that is a treat, as Holmes tries to remember and write the truth about his last case. Is it the greatest Holmes mystery out there? No. But it covers new, intimate ground with a character you thought you knew.

Christopher Plummer as Sherlock Holmes is one of life’s true pleasures. Unlike a great many versions of the detective, Plummer’s Holmes is warm, capable of empathy, and, at times, downright jovial. He’s still driven by logic, but for once, not at the expense of his humanity. This Sherlock isn’t impenetrable, something you witness as he and Watson (James Mason) trail the bloody steps of Jack the Ripper. The gruesome Ripper murders aren’t a canonical case for Holmes, but there’s a cottage industry in pitting them against each other. Lindsay Faye’s Dust and Shadow is an excellent example, or you could play through the hunt yourself with the video game. Or you can just watch Plummer outwit conspiracy in his effort to save some of London’s most vulnerable women.

To many, Rathbone is the definitive Holmes, having played the detective across 14 movies. Rathbone’s shrewd, eagle-eyed, and springy interpretation set the tone and style for most Sherlock Holmes adaptations that followed. By contrast, if you’re a Dr. Watson stan, avoid these films at all cost. Here Watson (Nigel Bruce) is a bumbling buffoon of a sidekick rather than a partner to Holmes. More often than not he plays the part of a sentient pratfall. But you don’t have many of the Holmes and Watsons on this list without Rathbone and Bruce. A personal favorite is 1939’s The Adventures of Sherlock Holmes, which isn’t an adaptation of any single Holmes story but finds the detective satisfyingly matching wits with his nemesis Professor Moriarty.

Everyone’s favorite human-curious android, Commander Data, dons the deerstalker in one of Next Gen’s most pleasurable story arcs. Data, the self-aware android with a positronic brain, makes an oddly perfect Holmes. He’s relentlessly logical and incessantly curious. Pairing him with the excitable Chief Engineer Geordi La Forge creates the same Holmes-Watson dynamic of Doyle’s original stories. The difference? When this Holmes wishes for a foil capable of defeating him, the ship’s computer truly can deliver, unleashing a Holodeck Moriarty so cunning he can take control of his own simulation. This would’ve been just a fun lark with one episode, but when the show revisits Moriarty in the sixth season’s “Ship in a Bottle” episode, it transforms into true, poignant brilliance.

It’s remarkable, the things that stick with you from childhood. What’s stayed with me from this chipmunk-forward rendering of the classic Holmes novel The Hound of the Baskervilles is something curiously simple: the globe in the Baskerville family library that spun open to reveal a trove of cigars. To me, it seemed the height of wealth. I’d know I’d have made it to the top when I had a large globe stuffed with cigars I’d never smoke. Though certainly not a must-see Sherlock Holmes adaptation for everyone, the Rescue Rangers take is awfully fun. Chip, Dale, and the crew are enlisted by a dog, MacDuff, to find the will that can prove the Baskerville mansion actually belongs to his master, the family’s kindly younger son.

Did I miss your favorite Sherlock Holmes adaptation? How would you have ranked his many adventures? Shout it out by tagging @bookriot on Twitter.

Need even more Sherlock Holmes in your life? Check out other sleuthing coverage from Book Riot:

You can also check out Book Riot’s definitive rankings for another author with endless adaptations: Agatha Christie.