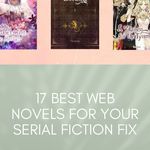 Delve into the world of light novels and you’ll eventually find yourself running across mention of web novels. Not gonna lie: it can be confusing when trying to figure out the difference. Some of the most famous light novels began as self-published series on internet forums, after all. Wouldn’t that make them web novels, too? Yes, technically. But in the context of common usage, web novels generally refer to online serialized novels from South Korea and China, while light novels refer to the format from Japan, regardless of whether they’re first published online or not. If you’ve only read light novels, you’re in for a treat! The best web novels deliver a mix of the familiar and new.

As you can surmise by the name, web novels are meant to be read online. Some North American publishers like Yen Press have been releasing them in collected volumes, but if you limit yourself to only that format, you’ll be missing out. Many titles can be read via online browser or apps. A quick caveat, though: some web novels are app exclusives. If you’re unfamiliar with digital apps, check out this quick primer. It’s geared toward manhwa, but the general idea remains the same.

By their very nature of being first serialized online, web novels are relatively new format. Even newer than light novels, which are also a relatively recent format. For that reason, rather than looking at classic web novels, let’s look at the most popular and well-known titles.

Solo Leveling made its English-language debut earlier this year, and what a splash it made! If you haven’t heard of this ridiculously popular series, it’s about a low-ranked monster hunter who has a close call with death. When he emerges from a coma, he discovers he’s acquired the ability to increase his strength through daily quests and missions. Because of the heavy game influence, Solo Leveling is probably one of the best web novels for beginners.

While Chinese web novels haven’t gotten a foothold yet on the English-language market the way Japanese light novels and Korean web novels have, it’s a very robust area. This is the best category to look up if you love wuxia and xianxia stories. Wang Yu’s epic tale follows a commoner who goes on a journey to cultivate to immortality. Sound familiar? Think again. In a genre filled with harems, super talented protagonists, and main characters who get “assists” that speed along their journey, A Record of a Mortal’s Journey to Immortality eschews all that. It may be a slow build story, but there’s a reason it’s considered one of the best web novels from China.

Love stories where the protagonist wakes up to find themself in their favorite novel? This one offers a twist on the popular trope. Dokja Kim loves the online web novel “Three Ways to Survive the Apocalypse.” When Earth plunges into the web novel’s setting, Dokja uses his insider knowledge and teams up with the series’s original protagonist to save the world.

In 2020, a Chinese drama called The Untamed hit Netflix and took fandom by storm. The series is based on a danmei — or boys love — novel by Mo Xiang Tong Xiu, AKA MXTX. Earlier this year, Seven Seas announced that they’d licensed that novel, along with the rest of MXTX’s catalog. Heaven Official’s Blessing is MXTX’s third novel and follows a god who has been cast out of heaven twice and has ascended once again for a third time. As he completes assigned tasks to maintain his newly regained godhood, he meets a man named San Lang, who has been keeping an eye on him for a long time.

The Second Coming of Gluttony by Ro Yu Jin

Seol Jihu is a gambling addict. It’s ruined his life. Desperate to leave this miserable existence, he escapes into a literal fantasy world but ends up dying there. Oops. However, he’s given the chance to send back his emotions to his past self. And from there, Seol uses this knowledge to redeem himself and try again.

Iris: The Lady and Her Smartphone by Yooswan (Tappytoon app exclusive)

How about a transmigration story that throws in a little of time travel? Our heroine, Iris, has just been murdered. As she dies, her entire life flashes before her eyes — including memories from her prior life in the modern world. But a stroke of luck sends her back in time before she was ever married. Now she intends to get revenge, and part of her plan involves Duke Valenciaga. What does he want in return? For her to date him. Seems like there might be a catch, right?

The Regressed Demon Lord Is Kind by Hungry Panda

Picture this: you’re a powerful demon lord who’s just been defeated by a group of heroes. As you lay dying, their leader stands over you and wishes that you become a kind person in your next life. Sometimes wishes are curses, though. And so our demon king returns to his younger self with all his memories intact and decides to honor the hero’s wish. Of course, he’s a demon, so his definition of “kind” might be a little different.

Daddy, I Don’t Want to Marry by Hong Heesu

Despised by her father and lover, Jubelian dies alone and sad. But she gets another chance at life, and in the process, realizes she’s transmigrated into a novel she’d read. Armed with this knowledge, she decides to live a peaceful life — which includes avoiding marriage to the crown prince. That plan, however, may prove impossible since the crown prince may be closer than she realizes.

Love straight-up transmigration stories without reincarnation and time travel? Here’s one for you. Eunha woke up to find she’s become the side character of a novel. Alas, this side character ends up poisoned by her fiancé. No, thanks. To avoid this bad end, she comes up with a new plan: pose as the fake fiancée of the novel’s male lead. Go big or go home.

A Villainess for the Tyrant by Yoo Iran

As a princess, Cecile always expected a political marriage. That’s why she’s resigned to becoming the wife of Emperor Estian. Unfortunately, Estian’s reputation precedes him. As you can probably guess, it’s not a good reputation. Cecile knows it’s only a matter of time before she dies at his hands, so she decides to put up a fight and become the villainess to his tyrant.

Five years ago, Yeon-woo’s twin vanished without a trace — until today, that is. Today, he finds his brother’s pocket watch and, more importantly, the diary tucked inside. He learns that his brother died while trying to climb a legendary tower that happens to be a dimensional nexus. Guess it’s time for him to climb the tower himself.

Light and Shadow by Ryu Hyang

Ryu Hyang has written some of the best web novels out there, and Light and Shadow lives up to that reputation. Duke Eli expected to marry a noblewoman. Instead, the noblewoman jilts him and a rude servant named Edna comes in her place. But there’s more to Edna than meets the eye.

Web novels have inspired many writers outside of Asia. Here are some original English-language web novels that have the familiar tropes and conventions we know and love.

The Beginning After the End by TurtleMe

One of the most popular original English-language web novels, The Beginning After the End starts with King Grey. Unmatched in strength and power, King Grey sits at the top of his martial-driven world. But the higher you rise, the harder you fall, and after dying, he reincarnates in a world filled with magic. With a second chance at life, he strives to correct the mistakes made in his previous one. Alas, who said his new world would be peaceful?

Reborn as the Villain’s Lackey by Twoony

When Faith dies, she transmigrates into a novel she read as a child. Too bad for her, she reincarnated as Kaeda, the antagonist’s henchwoman. Worse still, Kaeda is supposed to die. So she does what other transmigration heroines have done and uses her prior knowledge to change her fate. But in doing so, she discovers the hero may not be all that heroic and the villain may not be that villainous.

Valeriana has had a rough time lately, but she hopes her life will change when she’s accepted into her dream university. Well, her life does change, but not in the way she thinks. After an encounter with a demon, Valeriana travels to another world where she must train to become a knight or be imprisoned forever.

Legend of the Arch Magus by Michael Sisa

A powerful mage tries to prolong his life, fails, dies, and reincarnates as a duke’s son in a medieval kingdom. Not a bad fate, but his new identity doesn’t have the best reputation. As a result, the duke’s son was exiled by his own family to a poor village. Not to be deterred, our protagonist works to expand his new domain and lead them into prosperity. And maybe use of his magical knowledge along the way.

In the wake of a great war between their two races, dragons and humans form pacts with one another to maintain the peace. Artemis lives a comfortable life with her brother and her dragon, but she wishes for a companion of her own. You know what they say about wishes! When a black dragon comes seeking revenge on her brother’s dragon, Artemis hastily bonds with him to stop him and joins him on a quest beyond imagining.

There you have it! Some of the best web novels to get you started on this format. Interested in reading more? Check out this list of the best light novels.