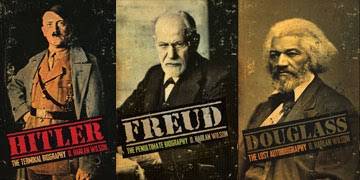 “It doesn’t matter what I write from now on. You know I’ve tricked you and you’re still reading Hitler: The Terminal Biography. Whatever I write, and however I write it, you’re probably going to think it’s pretty good.”

Let us be clear (famous last words): The three books which comprise D. Harlan Wilson’s recently published ‘Biographizer Trilogy’ (or, as he is sometimes prone to call them, his ‘Angry Black Author Trilogy’) are not biographies. They are an exploration of the ideas behind Biography, in the same way being abandoned in the middle of Death Valley without food, water or a map is an exploration of the American Southwest.

Their subjects, ostensibly, are Adolf Hitler, Sigmund Freud and Frederick Douglass, and yes, characters with those names occasionally flit through the pages like mischievous ghosts. But these books are so much more.

Wilson’s trilogy – which ideally should be read as a collective work – challenges us to decide how much we truly believe in Biography: do such books ever really have anything to do with the lives they purport to represent? Does the act of writing – about Hitler, Freud, Douglass or indeed anything – have less or more power than we might suspect? If such arguments sound dry and academic… Boy, do you not know Wilson.

An author, editor, critic, theorist, English professor and bodybuilder (the last one has unexpected relevance), Wilson has never been anywhere but the cutting edge of experimental fiction. He has been called an Irrealist, rescuing the term from its 1970s limbo, and also an Absurdist, though such a definition assumes his writing is somehow more absurd than the world it inhabits. Personally, I’m not so sure.

He is perhaps best known as one of the leading lights within the Bizarro fiction community, a tight-knit yet ever-expanding cohort of authors who celebrate weirdness without explanation or apology, and as a result have become perhaps the most exciting underground literary phenomenon of the past decade. But defining Wilson is usually impossible, for he never allows his style to settle or stagnate. He can be sardonic, poetic, epigramic, juvenile and patrician, sometimes within the space of a single paragraph. Like the athlete he is, he constantly pushes himself further. He is also very, very funny.

His latest trilogy, published simultaneously by Raw Dog Screaming Press, is like a series of magic tricks that the magician painstakingly explains, but which nevertheless still dazzle the audience and retain an element of mystery. Meanwhile, as Wilson is explaining his tricks, he’s also stealing your wallet. He’s pulling moves we’re not even aware of until the aftermath.

By that point, however, you’ll be glad he did. This is metafiction at its purest, self-aware to the point of psychosis. Accompanying Wilson on the journey of discovering exactly what these books are is a provocative adventure (especially when you reach the halfway point of Hitler, and the author casually reveals all we have read thus far has been written in one sitting, while watching He-Man and the Masters of the Universe on Netflix).

So, while these books are not biographies, neither are they exactly fiction, though they do contain characters, events and dialogue which have little to no basis in reality. They are, in the author’s own (suspect) words, “a gallery of short dissertations on their [the readers’] own mental and physical inadequacies as well as conversations between the author and his wife.” (Douglass: The Lost Autobiography
Via chapters sometimes only a paragraph or a sentence in length, Wilson plans, backtracks, sidesteps and reinvents each narrative as he writes it, laying false trails, introducing characters, killing them off, reviving them, and interpolating it all with digressions on writing, teaching, bodybuilding, Lacanian psychoanalysis and the sorry state of genre fiction.

“I’ve always hated it when writers write about writing and especially themselves,” Wilson writes at one point in Hitler. “Writers aren’t interesting.” Like every statement in this trilogy, such declarations should be treated with scepticism, but Wilson reflects a common assumption. The reason writers writing about writing gets a bad rap is that it too often becomes an excuse for narcissism and navel-gaving. With the Biographizer Trilogy, that is emphatically not the case.

Still, you wouldn’t necessarily want to meet the version of Wilson he presents on the page, carved out of muscle and prose, with the intellectual arrogance of Ignatius J. Reilly and the superhuman body of a UFC champion. He can be astonishingly, gloriously brutal, especially on the subjects of self-publishing (“James Joyce and that fat woman with the dyed black hair – they’re all fat women with dyed black hair – who wrote 50 Shades of Gray filled too many dummies with hope.”) and Horror writers (“They all wish they were H.P. Lovecraft. They don’t understand that Lovecraft was really just a Klansman with an underbite.”) Wilson works hard to make himself unlikeable, but never quite succeeds. It is one of the trilogy’s few failures.

When Wilson is at his most theoretical, I must admit, my critical qualifications fall short. There are teachers walking the Earth who could tell you in punishing detail about my many shortcomings in the field of critical theory. Under most circumstances, I subscribe to the arguments in Knapp and Michaels’ ‘Against Theory’ almost out of self-defence. So it is a tribute to Wilson’s imagination that he somehow manages to make me care about Lacan. Even Slavoj Žižek can’t do that, and that’s pretty much his entire deal.

It’s one thing to be an unconventional writer. Being an unconventional writer in the field of Bizarro fiction – the mission statement of which forces us to ask hard questions about what we consider ‘weird’ and why we do so – takes some doing. It may be why Bizarro, which often favours gory, quasi-pornographic pulp rather than theoretical noodling, has embraced Wilson as one of its most exciting voices. Wilson manages to stand out, even in an army of misfits, and the Biographizer Trilogy demonstrates why.

At one point in Freud: The Penultimate Biography, Wilson relates a phone conversation with his publisher, who tells him the following:

“You are an author. They are writers. Anybody can be writer; you pick up a pen and you write something. You may even get published. But that doesn’t make you an author. An author is a writer by profession, and via the context of social strata a philosophical warrior influencing the development of critical thinking. It’s like saying the Hulk is a bodybuilder. No: HE’S THE FUCKING HULK. That’s the difference between you and genre writers. And all writers.”

Wilson is capable of pushing back the boundary of what being an author means. That is something for which all of us, readers and writers alike, should be grateful.