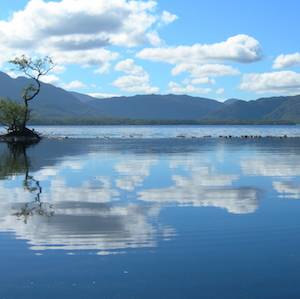 Killarney happens. More precisely, in my case: you make Killarney happen, even if you only half know why you’re going there, and even if underplanning puts you there in the middle of a golf tournament, when the park’s beauty is obscured behind the bustle, and your only recourse is to escape to a castle on a lake. (The castle is, of course, overbooked for tours when you come to it.)

You find yourself, as it happens, paddling onto Lough Leane, as though you’re at all capable of handling a rowboat. You look into the faintly purple hills and wonder how you got here. 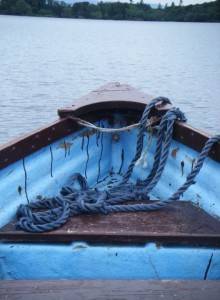 Ireland had called to me, and I’d answered. I went alone, with an out-of-date guidebook, no real love for Yeats beyond “Lapis Lazuli,” one hotel reservation for a trip when I’d need eight, and a jotted down list of places that sang to me. Killarney–blame Cecelia Ahern’s  P.S. I Love You—was high on that list. Rowing on Lough Leane was not.

My awkward hour on the lake–during which I basked in Irish loveliness, sure, between curses and oar fumbles–got tucked away as a question mark in my Irish travel journal, an experience that I hoped I would grow to appreciate, but which seemed mostly mistaken in the moment. I felt as though I was letting something pass me by. It was not until a half-year later, when I sat down with a book I’ve owned since I was five, that I was able to pin-point that miss.

Lough Leane, you see, is a lake under which fairies live. 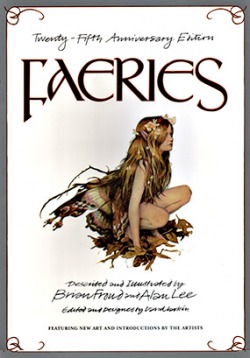 Brian Froud’s Faeries is one of my favorite volumes, a book I’ve had forever and never considered culling, though I’ve now read it exactly once. It was a garage sale acquisition, traded for a quarter to the neighbor across the street, that I was drawn to because fairies were a romantic Disney concept to me. Froud’s book is not Disney-ready; his illustrations are more magical, more elemental, and sometimes downright eerie.

The fairy lore Froud collects is not always safe for children’s eyes. Some fairies have horns, or eyes that look cruel, or appear gaunt and unfriendly. There’s not a Tinkerbell in the bunch. I’ve always been a little too credulous for my own good, so tales of getting lured into fairy lands beneath hills and disappearing forever are the types of things that seemed believable enough to frighten me. Faeries became an enigma in my collection: House of Leaves-esque, the type of book I could only wade so far into before damning myself to a week of sleeplessness.

After twenty-five years, I tried it anyway. Safely in adulthood, where I could at least proclaim not to believe these things, I let wonder dominate the creepiness factor. I was enjoying reading Froud’s fairy tales quite a lot, in fact, when I stumbled upon Lough Leane.

Legend has it (I learned) that O’Donoghue, once a royal in Ireland, sank beneath the surface of the lake and claimed a new kingdom on the ground beneath Lough Leane. He’s said to reside in a castle at the bottom, and has occasionally been seen rising from below, accompanied by a fairy court  “linked together with garlands of spring flowers, [moving] to the time of sweet unearthly music” to see the land that was. When O’Donoghue appears (I read) you are left awed, dream-like, and unsure.

…and I missed it!

I must have passed over that page a dozen times in the years between buying Faeries and visiting Ireland. Maybe that’s why Lough Leane seemed like a good idea: some vague sense of the magical, some promise that I’d never meditated on too long. But I’d never read the page. I was completely ignorant to O’Donoghue’s new kingdom while I struggled in my cumbersome rowboat above it.

I’m a girl who likes to bring her reading to life: I’d totally have ducked my head in if I’d known. I’d have wanted to satisfy my curiosity. (I’d probably have fallen in and embarrassed myself even further, but: you know. What happens on vacation.)

Now, Faeries tops my list of recommended reading before any literarily-inclined trip to Ireland. Sure, Dubliners and a little Yeats are a smart way to go, but Faeries will leave your senses singing in a way that bored, indulgent guides at Blarney cannot.

Maybe you, unlike me, will be left with the ability to spot a fairyland when you’re right above it.