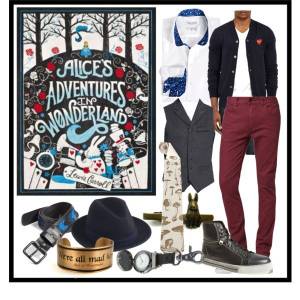 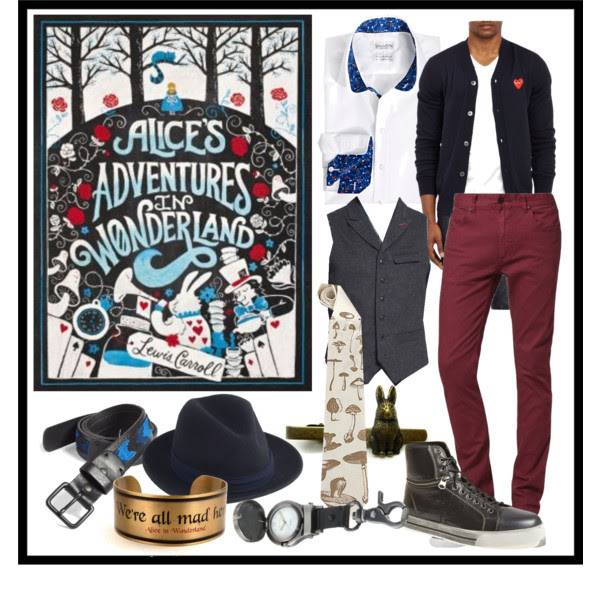 As a self-proclaimed Alice fangirl, I’ve brainstormed more than a few Wonderland-inspired outfits over the years. The whimsical, zany, and engrossing world(s) of Lewis Carroll – aka Charles Dodgson – have captivated generations and consistently prove to have an ageless appeal. The number of pastiches, homages and spinoffs that Alice’s Adventures in Wonderland has spawned is massive, and thanks to a certain Disney film, cultural saturation is pretty much complete. One thing you don’t see enough of though is a more masculine spin on Alice. I started off with doing a straight gender-swap for Alice the character, but didn’t really like where it took me, and by that, I mean the pinafore was a big problem. Also, I really missed pulling in some of The Mad Hatter elements. So this is more of a general Wonderland outfit and not specific to any one character, but I humbly present to you A Gentleman’s Alice.

The main outfit consists of some poppy-but-not-overly-vibrant chinos, a “Purple Wonderland” shirt, a White Rabbit-worthy waistcoat, and a “Playful Heart” cardigan. The leather sneakers walk the line between casual and dressy and feature a zip off top… “Off with their heads!” A pop of blue from the belt ties in with a chapeau that any Hatter would love to own, I’m sure. The tie is absolutely optional, but, really, who would decline a Caterpillar-inspired mushroom example, particularly when paired with a Rabbit tie clip? I think this Cheshire Cat quoting cuff works for women and men, and what quote has ever proved more universally appropriate than “We’re all mad here”? Toss in a modern spin on the pocket watch and you’re all set for your next tea date.