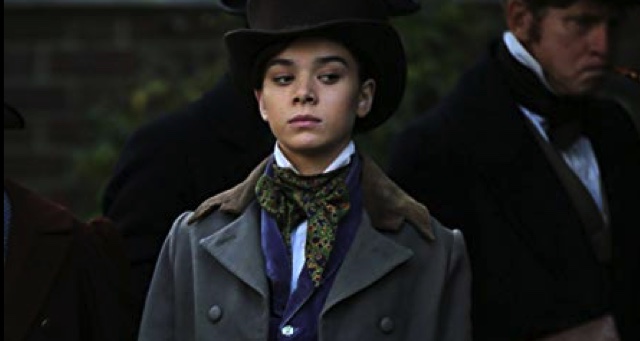 Unless you’ve been living under a rock, you’ve probably heard that Apple has come out with their own streaming service, Apple TV+. And if you haven’t dropped everything to go watch future EGOT winner Hailee Steinfeld star as Emily Dickinson on their new series Dickinson, I’m not sure if we can be friends! While the series might not be every literary enthusiast’s cup of tea (they speak in modern vernacular and the soundtrack includes Billie Eilish), it still offers refreshing new insight into the sheltered life of a literary icon who came of age centuries before her time.

If you’ve checked out Dickinson and are looking for some more information on the beloved poet, here are ten titles to check out!

Descriptions are adapted from Goodreads.

Note: Since Emily Dickinson’s lifetime was not a particularly inclusive one for people of color (or women, for that matter), few of these titles were written by authors of color and may not represent the diverse literary atmosphere we strive for here at Book Riot. 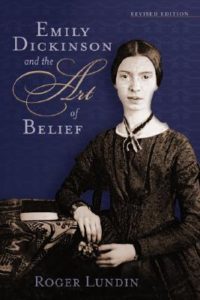 Emily Dickinson and the Art of Belief by Roger Lundin

Roger Lundin’s Emily Dickinson and the Art of Belief has been widely recognized as one of the finest biographies of the great American poet Emily Dickinson. Paying special attention to her experience of faith, Lundin skillfully relates Dickinson’s life—as it can be charted through her poems and letters—to 19th century American political, social, religious, and intellectual history. 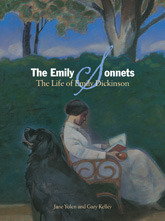 The Emily Sonnets: The Life of Emily Dickinson by Jane Yolen & Gary Kelley

She was quiet and fiercely private. She was bold and fiercely creative. And it wasn’t until after her death that the world came to know her genius. In The Emily Sonnets, Jane Yolen’s beautiful sonnets and insightful biographical notes spotlight Emily Dickinson’s schooling, seclusion, and the slant rhymes for which she became famous, while Gary Kelley’s captivating artwork portrays the poet’s 19th century Massachusetts world, including her family, faith, and fears. 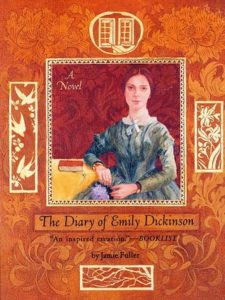 The Diary of Emily Dickinson by Jamie Fuller & Marlene McLoughlin

The discovery of Emily Dickinson’s poetry after her death unleashed a series of mysteries and revelations that astonished those who knew her and continue to intrigue readers today. Such is the premise of this unique fictional work. This diary begins in March 1867 and ends in April 1868. During this span Dickinson recounts the revelations and trials of her day-to-day life, from burnt puddings to professions of undying love. With discriminating insight, Jamie Fuller helps extract from Dickinson’s cryptic style her views on God, family, nature, death, love, poetry, fame, and her role as a woman in a patriarchal society. 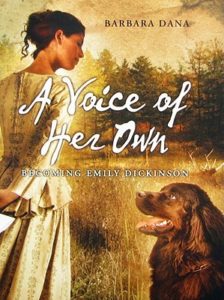 A Voice of Her Own: Becoming Emily Dickinson by Barbara Dana

Before she was an iconic American poet, Emily Dickinson was a spirited girl eager to find her place in the world. Expected by family and friends to mold to the prescribed role for women in mid-1800s New England, Emily was challenged to define herself on her own terms. Barbara Dana brilliantly imagines the girlhood of this extraordinary young woman, capturing the cadences of her unique voice and bringing her to radiant life.

Emily Dickinson Beyond the Myth by Patricia Sierra

Forget what you’ve been taught about Emily Dickinson, discard the myth that has been passed down through the years, and step into Emily’s real life. Although this is a work of fiction, it is told in the first person as if it were an autobiography and contains a mix of both known facts and informed speculation. The Emily Dickinson you’ll meet in these pages is the woman revealed in her letters and in the comments of her contemporaries. She was a strong woman faced with more losses than anyone should have to bear, and her everyday life had more to do with the tasks of maintaining a home than with crafting the perfect poem. 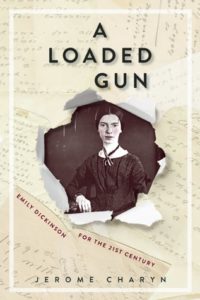 A Loaded Gun: Emily Dickinson for the 21st Century by Jerome Charyn

We think we know Emily Dickinson: the belle of Amherst, virginal, reclusive, and possibly mad. But in A Loaded Gun, Jerome Charyn introduces us to a different Emily Dickinson. Through interviews with contemporary scholars, close readings of Dickinson’s correspondence and handwritten manuscripts, and a suggestive, newly discovered photograph that is purported to show Dickinson with her lover, Charyn’s literary sleuthing reveals the great poet in ways that have only been hinted at previously: as a woman who was deeply philosophical, intensely engaged with the world, attracted to people of various genders, and able to write poetry that disturbs and delights us today. 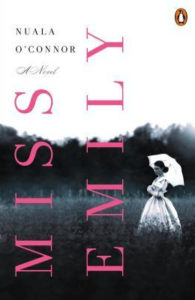 Ada Concannon is the new maid for the respected but eccentric Dickinson family of Amherst, Massachusetts. She befriends Miss Emily, the gifted elder daughter living a spinster’s life at home. Emily is a bastion of support as Ada struggles to find her place in this new world, while Ada’s toil gives Emily the freedom she needs to write. But Emily’s passion for words begins to dominate her life. She decides to wear nothing but white and increasingly avoids the outside world. When Ada’s safety and reputation are threatened, however, Emily faces down her own demons in order to help her friend, with shocking consequences. 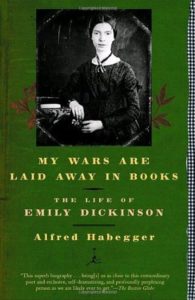 My Wars Are Laid Away in Books: The Life of Emily Dickinson by Alfred Habegger

Emily Dickinson, probably the most loved and certainly the greatest of American poets, continues to be seen as the most elusive. One reason she has become a timeless icon of mystery for many readers is that her developmental phases have not been clarified. In this exhaustively researched biography, Alfred Habegger presents the first thorough account of Dickinson’s growth—a richly contextualized story of genius in the process of formation and then in the act of overwhelming production. The definitive treatment of Dickinson’s life and times, and of her poetic development, My Wars Are Laid Away in Books shows how she could be both a woman of her era and a timeless creator. Although many aspects of her life and work will always elude scrutiny, her living, changing profile at least comes into focus in this meticulous and magisterial biography. 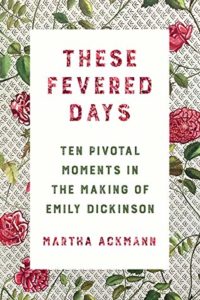 These Fevered Days: Ten Pivotal Moments in the Making of Emily Dickinson by Martha Ackmann (February 2020)

Despite spending her days almost entirely “at home” (the occupation listed on her death certificate), Emily Dickinson’s interior world was extraordinary. She loved passionately, was ambivalent toward publication, embraced seclusion, and created 1,789 poems that she tucked into a dresser drawer. In These Fevered Days, forthcoming from W.W. Norton & Company in February 2020, Martha Ackmann unravels the mysteries of Dickinson’s life through ten decisive episodes that distill her evolution as a poet. Ackmann follows Dickinson through her religious crisis while a student at Mount Holyoke, her startling decision to ask a famous editor for advice, her anguished letters to an unidentified “Master,” her exhilarating frenzy of composition, and her terror in confronting possible blindness. Together, these ten days provide new insights into Dickinson’s wildly original poetry and render a concise and vivid portrait of American literature’s most enigmatic figure. 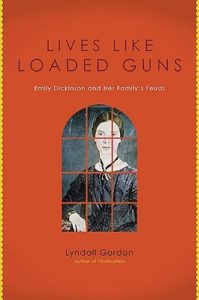 Lives Like Loaded Guns: Emily Dickinson and Her Family’s Feuds by Lyndall Gordon

In 1882, Emily Dickinson’s brother Austin began a passionate love affair with Mabel Todd, a young Amherst faculty wife, setting in motion a series of events that would forever change the lives of the Dickinson family. The feud that erupted as a result has continued for over a century. Lyndall Gordon, an award-winning biographer, tells the riveting story of the Dickinsons, and reveals Emily as a very different woman from the pale, lovelorn recluse that exists in the popular imagination. Thanks to unprecedented use of letters, diaries, and legal documents, Gordon digs deep into the life and work of Emily Dickinson, to reveal the secret behind the poet’s insistent seclusion, and presents a woman beyond her time who found love, spiritual sustenance, and immortality all on her own terms. An enthralling story of creative genius, filled with illicit passion and betrayal, Lives Like Loaded Guns is sure to cause a stir among Dickinson’s many devoted readers and scholars.

Do you have any favorite fascinating books about Emily Dickinson? Or your own favorite poet?