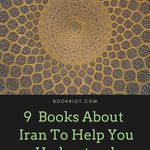 While the relationship between Iran and the United States has been playing out in front page headlines for many years, recent events have heightened tensions between the two countries and also brought into focus long standing issues that dominate the American-Iranian relationship. Whether you’re looking for a comprehensive history of Iran and the Persian Empire, a focused analysis of Iran and the U.S. in the 20th century, or a piece of fiction that will give you insight into modern Iranian culture, try out the books about Iran below to help answer your questions and deepen your understanding of what’s going on between the two nations.

Disclaimer: International politics and foreign policy tend to be heavily dominated by male voices, a fact that is reflected in these books. If you have the ability to read books written in languages prevalent in Iran, that can greatly expand what is available to you.

In the Beginning: Books About Iran

If you want to start at the beginning, these survey histories will give you a better understanding of Iran, both in its modern form and as the ancient culture known as the Persian Empire. Tracing political, religious, and economic events from ancient times to the present, neither of these books is short or simple, but both provide necessary background for beginners in the subject or a way for foreign policy enthusiasts to tie together and deepen their knowledge of Iran.

Iran: Empire of the Mind by Michael Axworthy

An introduction to Iranian history that goes beyond the current borders of the country to explore the idea of Iran as a cultural entity, this comprehensive history traces the development of Zoroastrianism and the rise of the Persian Empire to the Revolution of 1979 and the current political leader and climate. A solid primer for those looking for a scholarly background before diving into more specific books or articles, particularly for anyone interested in the different sects of Islam and how they interact in modern Iran.

If you’re looking for a survey history that focuses mostly on the 20th and 21st century, this is it. While not short (the paperback version comes in at just over 1,000 pages) it is comprehensive and provides a deep dive into the major events that have shaped modern Iran as well as tracing the literary and social movements that have influenced the country’s writers and artists.

To understand modern Iran (and its relationship with other countries), it’s important to look at voices that have experienced those events first hand, or at least had access to significant primary sources. Try starting with Marjane Satrapi’s Persepolis books, which combine her own memories of the 1979 Revolution with striking illustrations. Then, move into some political science books that look closely at major political and economic events of the past fifty years and how they shape Iranian–U.S. relations today.

One of the best known Iranian writers/graphic novelists, Satrapi has created a beautifully illustrated memoir of her adolescence at the time of the Iranian revolution. Satrapi’s striking black and white illustrations and intimate narration humanize and complicate the revolutionary time period that has come to define Iranian history for so many of those outside the country. The book combines Satrapi’s youth with memories of her family as well as explanations of the political and cultural trends of both ancient and modern Iran.

Iranian native and teacher Nafisi forms a book group where women from different backgrounds gather to read and discuss a variety of books that, under the country’s religious rulers, are becoming increasingly forbidden. Nafisi uses the story of her group to illustrate the power books hold as well as allowing us to connect to the women and their stories in a more intimate way than is shown in other books.

All the Shah’s Men: An American Coup and the Roots of Middle East Terror by Stephen Kinzer

Confused about the coup that brought the Shah to power and the role of the CIA? Kinzer’s book is considered one of the foremost, balanced accounts of the events that ousted Iran’s prime minister and installed the U.S.–backed Shah in 1953. A more focused history than the ones above, this book provides crucial insights into the transformation of Iran from a republic ruled by an elected leader to the installation of the Shah’s rule and traces how these events lead to the current terrorist groups and uprising not just in Iran, but across the Middle East as well.

The Twilight War: The Secret History of America’s Thirty-Year Conflict with Iran by David Crist

If you think that conflict between Iran and the United States is a recent phenomenon, Crist’s book is here to disrupt that idea, beginning with the fact that the United States and Iran were once allies, not adversaries. Using government documents and top level interviews, Crist shines a light on events such as the discussions between Iran and the United States following the September 11 attacks and the decisions and events that lead to Iran’s determination to become a nuclear state. Though the book was published in 2013, its insight into the Iranian military, and Qasem Soleimani in particular, make it relevant to readers today.

As readers, we often strive to get a deeper look inside a culture by consuming its literature. While history books can provide important background and perspective, the world-building and character development aspects of fiction allow us a fuller idea of what a society is like. Additionally, fiction can help address the issue of the dominant narratives in history, by letting us peek into the lives of those who are not bolded names in textbooks, but rather living their everyday lives as events unfold around them.

The Poems of Hafez

Not much is known about the ancient Persian poet Hafez, but his popularity and influence on Iranian culture is enduring. Considered to be one of Iran’s most quoted cultural influences, reading the poems of Hafez (in the original Persian if you can, or in translation) provides a valuable insight into Iranian culture.

Women Without Men: A Novel of Modern Iran by Shahrnush Parsipur

A beautiful piece of literature that will appeal to fans of Toni Morrison, this book tells the interwoven stories of five women in Tehran. Combining realistic fiction with elements of Islamic mysticism and traditional storytelling, this female-centered narrative is an important counterbalance to the often male-driven histories that tend to dominate reading list such as this one.

My Uncle Napoleon by Iraj Pezeshkzad

Cited by many as the defining Iranian novel of the 20th century, My Uncle Napoleon is a dramatic and timeless family saga that has enough feuds, fortunes, and intrigue to appeal to a wide audience of readers. Centering “Uncle Napoleon,” the patriarch of a sprawling, wealthy family, the book’s satirical take on Iranian society in the 1970s has made it a key figure in the country’s literary history.

While there’s no one book that could teach you everything about Iran’s history or the complicated role other nations have played in it, hopefully something here is a jumping off point that allows you to be more informed about the events occurring around you!