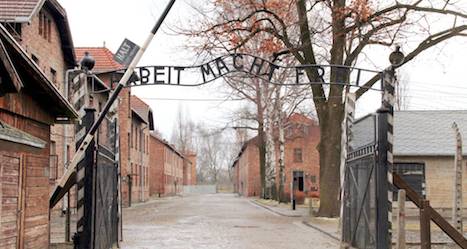 I have always fancied myself an amateur World War II historian. I have been fascinated with that war since I was a child and my grandfather, a WWII veteran himself, would sit me down as a kid and willingly tell me stories about his time in the Pacific. But despite my fascination with the war itself, it was the Holocaust that I gravitated toward. The sadness, torture, horror, and unbelievable loss of life during the Holocaust is something I can never understand. To think something so outrageous could have happened only seventy plus years ago is surreal.

Every year, the library system I am employed at hosts  “The Holocaust: Learn and Remember” during the month of January since January 27th is observed as “International Holocaust Remembrance Day.” This got me thinking about the best books about the Holocaust that I ever read. There are too many to list so I will narrow it down to the ones that I feel changed my life. In no particular order, here is the list as follows: 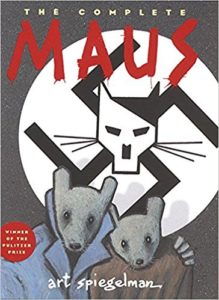 The Complete Maus by Art Spiegelman

This is not only one of the greatest graphic novels ever written, but it is also one of the most important and influential Holocaust books ever published. This book about the Holocaust tells the story of Vladek Spiegelman, a Jewish survivor of Hitler’s Europe. This book is chilling and will completely knock your boots off. The author (son of Vladek) creatively and artistically tells the story in the form of cartoon. The Nazis are portrayed as cats and the Jews are portrayed as mice. This book about survival had me feeling all sorts of ways. I was angry, sad, and confused as I turned each page. The sad part is that the author also details his perplexing relationship with his father. Here is a man who is telling his father’s story, a story of death and tragedy, yet, he does not have the best relationship with him. His father lived through quite possibly the worst tragedy the world has ever seen and we see them arguing quite often as the book unfolds. The Nazi’s cruelty and heartless ideology is something you will never forget after reading this one. If you have not read a book about the Holocaust yet, this is a great one to start with. 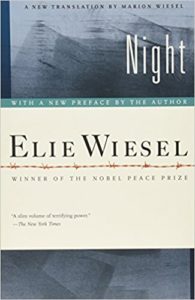 Of course this one is on my list. Aside from Maus, this is one of the greatest books about the Holocaust you will find. Night delivers an autobiographical account of Elie Wiesel’s survival in one of the deadliest camps of the Holocaust: Auschwitz. This book was tough to read because Wiesel details just what life was like under Nazi rule in a camp that was filled with people who were undoubtedly being exterminated by the thousands on a daily basis. Tough decisions by the Jews themselves were made and surviving by any means necessary is what it came down to. Wiesel does not hold back in this book as he gave the world what it needed to hear about the Holocaust. Those who denied what happened in those death camps cannot deny the truth Wiesel penned. This book changed the way I thought about the Holocaust because it provides a small glimpse of what life was like for Jews like Wiesel. His mother and younger sister were immediately murdered when they arrived at Auschwitz, so he and his father needed to survive by doing whatever it took to somehow make it back home. This one is an absolute must read. 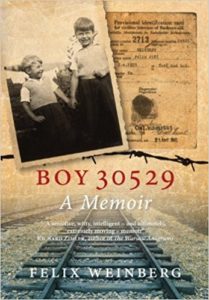 Felix Weinberg somehow survived five concentration camps. He was imprisoned by Nazis in 1939 and miraculously survived until 1945 when he and others were liberated at Buchenwald. Only a very small percentage of Jews who were sent to concentration camps survived the war. The fact that Felix survived five is an absolute miracle. He also survived a death march that was supposed to have killed every Jew, but with sheer will and determination, he survived. His family was not so lucky, however. His mother and brother were murdered and Felix was all alone. This memoir is the ultimate survivor’s tale. How could one young boy have survived all of this on his own? This question is answered in this book, but the details of his survival are definitely not for the faint of heart. Despite death knocking on his door numerous times, Felix was liberated at Buchenwald concentration camp and was later reunited with his father. Amazingly, Felix went on to become a well-respected physicist. This story is amazing because it is one of the last survivor’s tales of Jews who were imprisoned in concentration camps. Those who survived are well into their ’80s and ’90s so this book is definitely special. 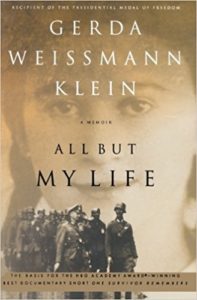 All But My Life: A Memoir by Gerda Weissman Klein

This book was also an amazing read. It details the life of Gerda Weissman, a young Polish Jew whose family was separated and sent to labor camps. Gerda’s uncle had actually sent her family a telegram warning them to leave Poland because the Nazis would invade. As much as the family wanted to leave, they could not due to Gerda’s father suffering a heart attack. He could not travel so the family had no choice but to stay. Eventually the Nazis did invade and Gerda’s family would forever be changed. Gerda suffered at the hands of the Nazis for six agonizing years while she had no family with her to provide any sort of comfort. She was separated from her mother, her father was executed at another death camp, and her brother was sent to fight for the German army. Throughout her harrowing experience in labor camps, Gerda became friends with many other Jews. Unfortunately, almost none of Gerda’s friends survived. Finally in 1945, Gerda and others were liberated in Czechoslovakia by the United States Army. The only positive thing that came out of this ordeal for Gerda was that her future husband, Lieutenant Kurt Klein, was part of the U.S. Army that helped liberate Gerda. This book was unique in that it details how Gerda and the people she was imprisoned with created a loving community within the confines of the camp.

These books about the Holocaust changed my life and the way I viewed the Holocaust. I say changed my life because these people suffered through a tragedy that we will likely never see again in our lifetime. My life will never be that bad. I told myself that when I felt like complaining about my life, I would remind myself that others throughout history had it much worse. I recommend you read these books about the Holocaust because they are truly great and eye-opening.

What do you think are the best books about the Holocaust?