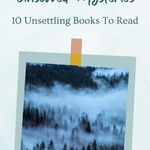 Netflix recently tweeted a reminder: the show is called Unsolved Mysteries. It’s right there in the title. You know what you’re getting into! So I say to you, gentle reader of this article, prepare for frustration. None of the books on this list will be definitively solving any mysteries. What they will be doing, however, is presenting you the details of a case, and possibly offering a potential explanation.

The appeal is in the potential. As evidenced with I’ll Be Gone in the Dark and the subsequent identification of the Golden State Killer, mysteries that have long been unsolved can reach resolution. Where mystery novels promise an answer in the end, real life tends to offer scattered information and narratives that trail off into formlessness. Still, books about unsolved mysteries are for people with a sense of hope. With fresh eyes, new ideas, and continued attention on a given case, closure is always a possibility.

Books about unsolved mysteries can also reveal a lot about the world, prompting us to work for change. There are failures in the systems meant to keep us safe. There are people keen to take advantage of those living on the margins. And frankly, there’s a lot about the world that we simply don’t yet understand. So if you’re looking for a new topic to keep you up at night, I bet you’ll be able to find one on this list. And a content warning: many of these books do investigate murders and sexual assaults.

The Five: The Untold Lives of the Women Killed by Jack the Ripper by Hallie Rubenhold

Among books about unsolved mysteries, uncountably many pages are devoted to Jack the Ripper, the unidentified serial killer from Victorian London. This stellar book brings much needed dignity to the women who fell victim to the murderer. Instead of plying readers with salacious details of the legendary killings, the book details the vulnerability of these five women who led precarious lives. Even with this more humane angle, the book is an absolutely riveting and unforgettable read.

In North America, stories of missing and murdered Indigenous people are too often swept aside. To wit, the two Indigenous activists at the heart of this story, James Brady and Absolom Halkett, went missing in 1967. They were on a trip to do mineral prospecting in remote Saskatchewan. As both were experienced outdoorsmen, some think they were not missing but murdered for their activism. The authors of this book appreciate the complexity of the story and the people involved. It’s a great choice, therefore, for anyone wishing to know more about Indigenous history in Canada through a true crime lens.

The murder of ​​Elizabeth Short, posthumously named the Black Dahlia, is one of the most famous unsolved crimes in U.S. history. Her story has been fictionalized in both page and screen with little care for the facts of the case. Piu Marie Eatwell’s book, in contrast, uses unredacted FBI files, LAPD files, and interviews to dive into the case in earnest. Using her own legal skills, she even identifies who she believes the culprit to be. Take care if you’re squeamish, as this book goes deep into the grisly case.

The Cold Vanish: Seeking the Missing in North America’s Wildlands by Jon Billman

Sometimes the world so small. When people vanish into the wilderness, however, we quickly see just how unfathomably vast this planet is. This haunting and thoughtful book profiles both the people who have gone missing in the wilderness and those who are determined to find them. It spotlights famous cases, search and rescue dogs, and theories about the mechanics of going missing. As a result, maybe you’ll never want to set foot on a trail again. Or maybe you’ll feel more at ease, knowing there are strangers out there dedicated to your survival.

We Keep the Dead Close: A Murder at Harvard and a Half Century of Silence by Becky Cooper

Nowadays colleges must be forthright about crimes on or near their campuses. The 1986 rape and murder of Jeanne Clery at Lehigh University prompted the passing of the Clery Act, which requires colleges to disclose such information. But the 1969 murder of Jane Britton, a Harvard University graduate student, went both undisclosed and unsolved. Becky Cooper, who heard essentially a ghost story version of the murder as an undergraduate, chronicles her search for the true story and what it reveals about power dynamics at elite institutions like Harvard.

The Unidentified: Mythical Monsters, Alien Encounters, And Our Obsession With The Unexplained by Colin Dickey

As someone who grew up in a town with a lake monster, I always loved the segments on Unsolved Mysteries that were a little out there. You know the ones. Aliens, ghosts, Bigfoot. My hometown lake monster even made it into one segment. For me the “unsolved mysteries” umbrella includes these unexplained phenomena. And while I do have my Time Life Mysteries of the Unexplained books from childhood, I prefer the writing of Colin Dickey. He knows how fun these topics can be, but also that fun is not always harmless. He identifies the thin line that separates having an open mind about our vast universe from the toxic kind of skepticism and conspiracy thinking that can lead to real harm.

The Good Girls: An Ordinary Killing by Sonia Faleiro

Some mysterious cases have official rulings by government bodies that do not satisfy many of the concerned parties. Such is the case of the 2014 deaths of two teenage girls in Uttar Pradesh, a state in Northern India. Evidence the girls were raped and murdered conflicts with official reports ruling otherwise. This book contextualizes the tragic short lives of these young women within the many complex systems that affected them: family, religion, politics, caste, economics, and more.

Fans of truly strange unsolved mysteries have their favorite subjects. For instance, D.B. Cooper, the Voynich Manuscript, the Taos Hum, and the Marfa lights. Likewise, the Dyatlov Pass incident would be right up there on anyone’s list of list of books about unsolved mysteries. How did a group of experienced hikers die in the Ural Mountains, some wearing improper clothing and shoes for the weather and others violently injured? Moreover, why did their clothing have high levels of radiation? This author has compiled everything known about this story, and he posits his own compelling account of how events unfolded on that fateful night in 1959.

No Place Safe: A Family Memoir by Kim Reid

The backdrop for this vivid memoir is the Atlanta child murders. During a period of time from 1979 to 1981, at least 28 people were murdered, most of them children and adolescents. These crimes have been attributed to one killer, who was sentenced for killing two adults. No charges have been filed for the child murders, though the case was reopened in 2019. Kim Reid was 13 during the summer of 1979, and her haunting memoir details the lost sense of safety that resulted from the tense environment.

The Gardner Heist: The True Story of the World’s Largest Unsolved Art Theft by Ulrich Boser

It’s not all murder and mayhem out there. Sometimes it’s art theft. If you visit Boston’s Isabella Stewart Gardner Museum — free admission if your name is Isabella! — you’ll spot some empty frames on the wall. Like a back door left open for a wayward cat, there’s a home for the stolen art to return to. Most importantly, these empty frames keep the heist in living memory. Thankfully, there’s also fresh interest in the unsolved mystery because of a recent Netflix documentary. People wanting to know more about the theft of priceless art, including one of the only 34 known paintings by Johannes Vermeer and Rembrandt’s only seascape, can check out this book that chronicles the brazen act.

If you’re looking for more true crime books, plenty have come out this year alone. And if this list of books about unsolved mysteries is too heavy on sensational crimes for you, you can go beyond. Lastly, if you discover that once you’ve run your nerves ragged with these enigmatic books and you need a tidy cozy mystery, I can’t blame you. We certainly have plenty of recommendations there too. It’s a mysterious world; take good care.