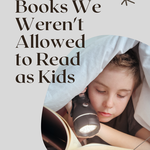 Has any parent ever successfully won a battle to have their kid not read a book? At 12, I hid in my room with my copy of Judy Blume’s Forever. I’d never been banned from any books, but I knew instinctively that this one would be, at best, frowned upon. And the knowledge of that made it all the more enticing. I asked my fellow Book Rioters what books they were banned from reading as kids, and why.

The Initiation by L.J. Smith

In elementary school, I was obsessed with Sabrina the Teenage Witch. One day, I got called into the principal’s office because a parent complained I was trying to teach their child about witchcraft. Despite the fact that I’d only been casually talking about recent Sabrina episodes, both the school and my family decided I was a tad too enthusiastic when it came to things they deemed to be of the occult. When I got home, my kid-friendly guide to astrology and my books about witches from L.J. Smith were gone. Given that I was reading Flowers in the Attic around the same time, I’m pretty sure the focus was on the wrong books.

The Golden Compass by Philip Pullman

My mom had heard from her friends that it was a bad influence, so I wasn’t allowed to read it. Eventually I did sneak a copy and didn’t find it particularly controversial…just sort of boring.

My parents were strict with TV and movies, especially when I was younger. By the time I was independently reading, they were a bit more lenient about fantasy, mythology, and characters who needed an attitude adjustment. The only book I remember getting a hard “no” from my parents was the His Dark Materials series. This was before the 2007 movie came out, which created a storm of controversy in my social circle. My parents’ reasoning for the ban was that the series mocked Christianity. I read Pullman’s Sally Lockhart series in the meantime.

The Color of Her Panties by Piers Anthony

I was obsessed with Piers Anthony in late elementary/middle school and my mom didn’t really bat an eye at all the naked people on the covers, but the title of this one did give her pause, which…fair enough, Mom! Luckily, I had borrowed it from a friend whose parents she had known for years, so after I threw a fit pointing out that if my friend had been allowed to read it, surely it was fine, she caved. It was actually relatively tame, compared to some of Mr. Anthony’s more, um…indulgent books.

She Went All the Way by Meg Cabot

This was the only book my mother ever refused to buy me. I was about 13 and I remember insisting that, “It says that she went all the way…TO ALASKA! It’s a joke!” I ended up buying it myself when she wasn’t with me. I’m now in my 30s and I still have my copy of the book and zero regrets.

When I was in middle school I bought the first volume in the InuYasha series from a Waldenbooks in the mall near me (throwback to the days of Waldenbooks). I was so excited to read about Kagome, the reincarnated priestess who accidentally travels back to feudal Japan, and her adventures with the half demon InuYasha. When my parents noticed nudity in the book, they took it away and said I couldn’t read it until I was at least 16. That same year, my brother surprised me with another volume in the series for Christmas. So I guess that’s what brothers are for.

The House of the Spirits by Isabel Allende

When I was a teen in Puerto Rico, I had a tradition of going to the high school library and checking out more adult-like and mature books. I loved reading so much, and was so excited to read new books, that sometimes Fear Street and Sweet Valley High was not enough! One book that was hidden away from me during my teen years, that I was so thrilled to read after, was The House of the Spirits by Isabel Allende, a Latin American author that my mother loved but might’ve considered her themes to be a bit too adult for me at the time. The story follows the Trueba family and their triumphs, tragedies, and life experiences. While filled with some tough moments, it’s a beautiful book worth reading.