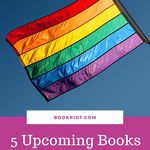 It’s a sign of progress that a list like this even exists, let alone contains just some of the books releasing soon that feature nonbinary characters between their pages. For a while there, these characters were pretty much nonexistent, or worse, authors depicted them with complete disrespect. Although most of the world is a garbage fire right now, at least we’re being spoiled with great representation across the gender spectrum.

First, a quick recap for those unfamiliar with the term: nonbinary people have a gender identity that is neither exclusively masculine or feminine. Hence, they’re literally outside the gender binary of man and woman.

You’ve probably already stumbled upon nonbinary rep in media by now and might not have even noticed it. Ever watched Steven Universe? Or She-Ra? Or even John Wick? Extra props to John Wick for having two prominent nonbinary actors throughout its trilogy so far (Asia Kate Dillon and Ruby Rose). That’s more gender diversity than I’m sure can be found in most company boardrooms.

Aside from television and film, however, literature is also making great strides in the people we see in our pages. And in books, nonbinary characters become much more obvious, as the prose uses pronouns to anchor the reader. If you’re also looking for books by nonbinary authors, check out this list.

So, check out these books that are amazing on their own as works of art, but double amazing for the progress they’re making in the all-too-homogenous world of publishing.

When the Tiger Came Down the Mountain by Nghi Vo (December 8th, 2020)

Nghi Vo blew the fantasy world away last year with her quiet but exquisite The Empress of Salt and Fortune. That was a ground-breaking novella about a young cleric who seeks to archive the legacy of a powerful empress. The cleric, Chih, uses they/them pronouns throughout. The same character is back this time, in grave danger for the sequel as they tell a story to avoid the wrath of hungry tigers. This one can be read as a standalone book, though I would highly suggest reading Empress as well!

Before we even get into it…just look at that cover. I’ll be honest, I am one of those people who does judge books by their covers. It’s what made me request this advanced reader’s copy of Persephone Station. And I’m really glad I did because I ended up with so much more than the space opera I assumed it would be. In the future Leicht has created, gender expression is much more fluid, and gender-nonconforming people fill her off-Earth world casually and generously. Feminist, racially diverse, and full of dynamic characters you’ll love, I suspect this will be a must-read of 2021.

Let me just say this: Rebecca Roanhorse has never written a book I didn’t completely adore, and the streak continues with Black Sun. Inspired by mythos and cultures of the pre-Columbian Americas, this start to a series will have you turning the pages under the covers with a flashlight like you did when you were six. On top of its utterly fantastic story and world-building, one of its main characters uses xe/xir pronouns and everyone else in the book refers to xem correctly and effortlessly.

Look, not all the books on this list are sci-fi or fantasy! The Ghosts We Keep is a contemporary young adult novel, where main character Liam—who uses both he/him and they/them pronouns—has to deal with the sudden death of his brother and the whirlwind of emotions that come along with it. Deaver wrote what was widely hailed as “one of the best books of 2019,” I Wish You All the Best, which centers a nonbinary person coming out and discovering who they are and making a new family for themselves. And that one you won’t have to wait to read.

Well, we’re back to more sci-fi and fantasy now. Listen, it’s not my fault that speculative fiction is where some of the coolest and most progressive stuff is happening right now. In Phoenix Extravagant, main character Gyen Jebi isn’t your typical hero. They just want to paint. But the Ministry of Armor needs them to paint sigils that animate the government’s automated soldiers. As Jebi soon learns, their work for the Ministry isn’t as harmless as they thought. And one of the automated soldiers—a mechanical dragon—begins to cultivate sentience and morals of its own.