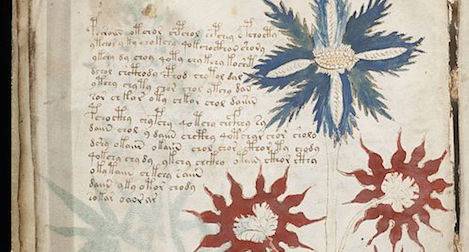 I only learned about the Voynich Manuscript a few months ago but I have been obsessed ever since.

Sometimes described as “the most mysterious book in the world,” the Voynich Manuscript could be a 15th century coded book containing all sorts of important secrets about the world. It could also be a complex hoax perpetrated by a rare book dealer. Since its discovery in the early 20th century, scholars and the curious have studied and speculated about this odd, beautiful book. It resembles an herbal text in some places, an alchemy text in others, and a religious text in still others. A century of scholarship hasn’t really resolved any of these questions and nobody has ever deciphered it. 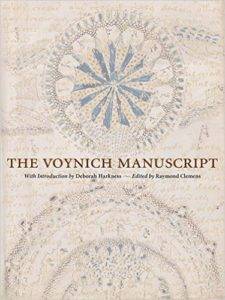 There are many novels that use the Voynich Manuscript as a major plot device. However, before you start in on those novels, you’ll need to pick up your very own reproduction of the book. Yale University Press published a gorgeous, full-color facsimile of the manuscript last year. Deborah Harkness (!) wrote the introduction to the book and it includes essays and commentary from noted scholars in a variety of fields. If you’re not ready to invest in this version, you can also view the entire manuscript for free online. Once you’ve got your bearings, or at least have a sense of the manuscript’s content, you’ll be ready for the novels on this list. 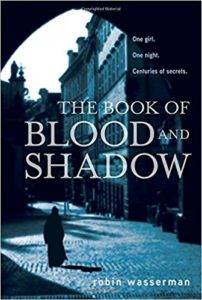 The Book of Blood and Shadow by Robin Wasserman is the girl-power, YA-Da Vinici Code you need in your life. Nora, the slightly awkward but whip smart teen girl at the center of this novel, manages to do the impossible: she  decodes the Voynich Manuscript. Once she does, she unlocks the secrets of an ancient religious order. Her race to avert catastrophe, and clear her boyfriend of a murder charge, takes her from a quaint New England college town to Prague’s ancient religious sites. This book has a delicious blend of religion and myth, several languages (Latin, Greek, French, and Czech), secret codes and riddles, secret societies, and brilliant teenagers who know more than they ever should.

Verdict: Buy this book if you’re ready for a YA-spin on Dan Brown’s work (and how could you not be?). 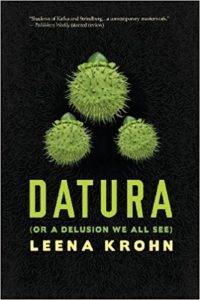 Datura, or a Delusion We All See by Leena Krohn, translated from the Finnish by  J. Robert Tupasela and Anna Volmari. I may have identified a little too much with the unnamed narrator of this slim volume. She works as an editor, writer, and fixer for a magazine that features the world’s odd, surreal, and implausible phenomenon. The book follows her slow descent into… what? Not madness, exactly, but something like it. As she starts ingesting Datura seeds and writing an article about the Voynich Manuscript her grip on reality becomes more tenuous. Along the way, she crosses paths with all sorts of odd characters, including a man obsessed with coincidences and another with “silent sound.” She also begins to question the nature of reality, history, and life itself.

Verdict: Borrow this Kafkaesque book on the mysteries we all inhabit without always realizing it. 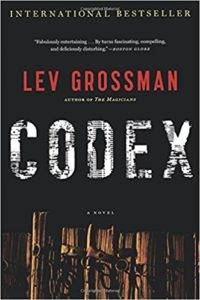 Codex by Lev Grossman was inspired by the Voynich Manyscript but doesn’t actually discuss it in any detail. I had really high hopes for Codex when I started it– after all, Grossman wrote the beloved Magicians Trilogy— but was disappointed. The narrator is a sort of smarmy, 25-year old investment banker about to move London. During a two week vacation leading up to the move, he takes on the work of cataloging the private library of a wealthy family. This leads him to a mysterious book that reveals secrets about the family’s lineage. Solving the manuscript’s mystery requires him to work with a young graduate student in medieval literature, obsessively play an underground video game, and cope with an existential crisis. Although I was generally interested in the plot, this novel just didn’t land for me. The narrator comments on the appearance and sexual availability of every woman he meets, no matter how minor the interaction. It got grating after a while.

Verdict: Bypass this dated book that was inspired by, but isn’t really about, the Voynich Manuscript.